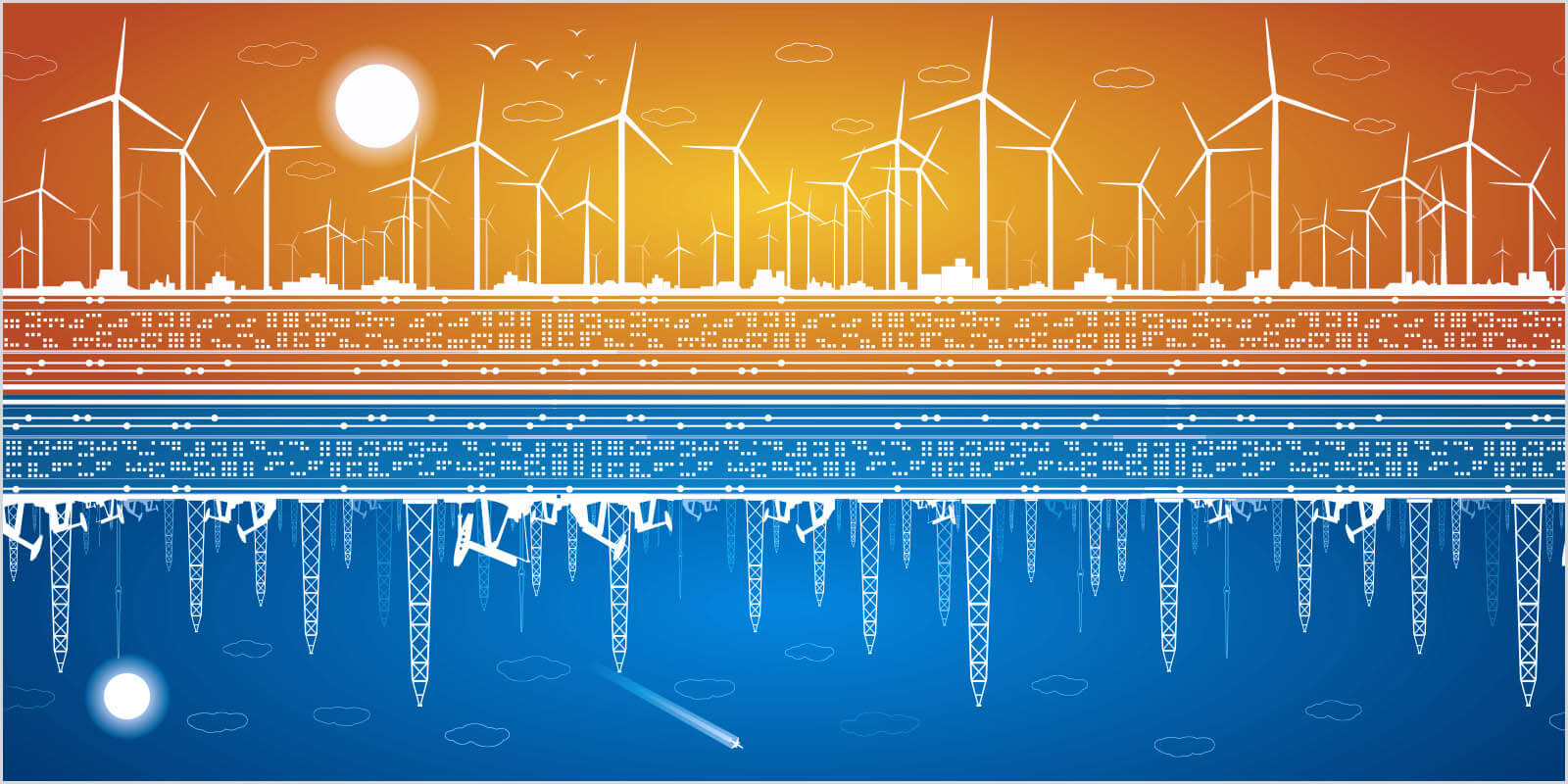 The shareholder proposal process provides a voice for investors of many sizes, forcing issuers’ hands to actively address a specific topic of concern. Ranging from executive compensation practices to disclosures within a proxy, shareholder proposals span the entire corporate governance landscape.

Environmental, Social and Governance (ESG) issues have become a critical benchmark for how shareholders view a company. Proposals around these issues—such as gender pay equity, a company’s dedication to sustainability or lobbying—have gained traction over the past few years. A company’s approach to ESG is often an indicator of whether it has a “positive” effect on the world, from internal operations to external influence.

Recently, BlackRock’s CEO Larry Fink penned a letter to the CEOs of many influential public companies stating that the investment firm would hold them accountable in the future for not having a significant effect on the world and the communities around them. Concerned with more than just the profitability of any specific company, the letter said BlackRock will vote against companies it deems not doing enough for society.

According to the Equilar report Corporate Governance Outlook 2018, featuring commentary from Donnelley Financial Solutions and Hogan Lovells, shareholder proposals concerning ESG have increased in prevalence over the years, evidenced by 40.2% growth between 2013 and 2017 at Equilar 500 companies. However, when ESG proposals make it into the proxy, they don’t often gain traction, and the proposals are rarely passed. This begs several questions: Are shareholder proposals a good indicator of how the broader investor base really cares about environmental, social and governmental issues? And does voting for these proposals currently give shareholders the most power to express their opinions on ESG matters? 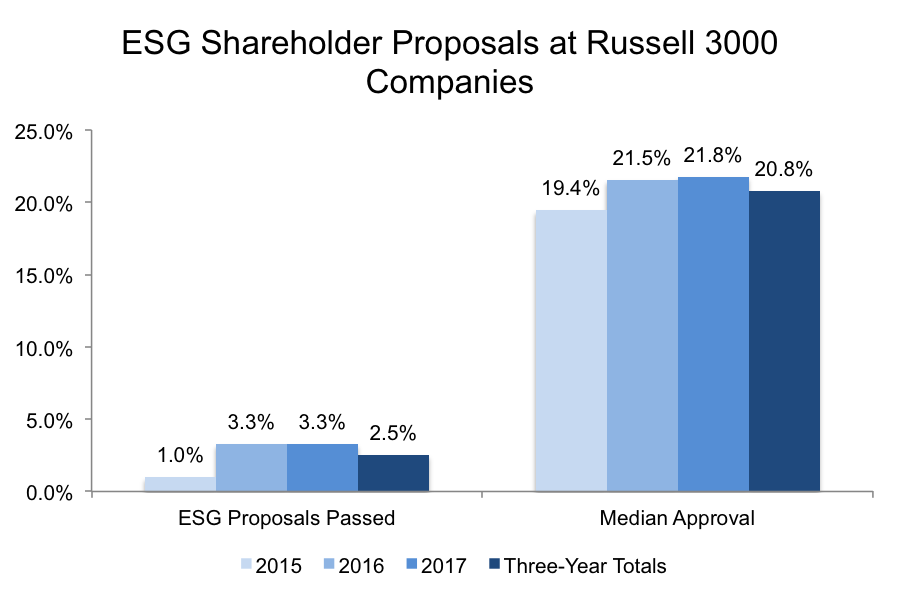 It’s common for shareholder proposals to receive less than the necessary votes to pass in general. And while ESG approvals seem to be gaining some traction, they are far from a majority movement. Therefore, shareholders may leverage their voting power on other proposals, such as Say on Pay, in order to have their voices heard.

Equilar examined Say on Pay votes at companies to see whether the presence of an ESG proposal correlates to the amount of shareholders support for a company’s Say on Pay vote. Almost all of the Russell 3000 companies that also had an ESG proposal the same year passed the Say on Pay vote, with at least 98% of companies doing so in each of the last three years. However, breaking down the data even further, just over two-thirds of these companies received 90% approval or above, and 2017 saw the fewest companies with this level of approval, at 67.4%. This number is roughly 10 percentage points lower than the Russell 3000 companies that did not have an ESG shareholder proposal. 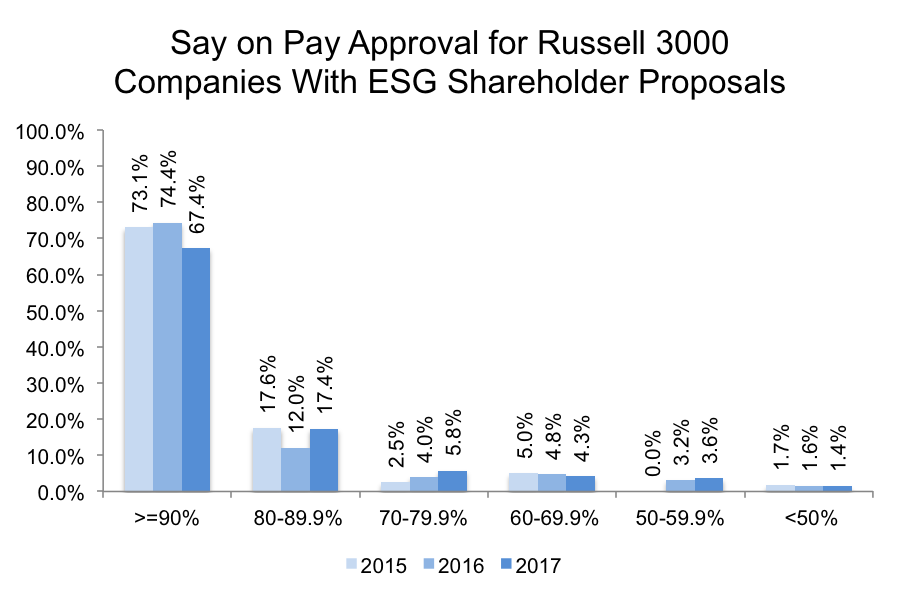 Director approval ratings may be another possible area affected by poor ESG practices, particularly board members who sit on committees overseeing issues related to the shareholder proposal. Another way shareholders could potentially push a company to address an ESG issue may be to vote negatively for any director on a committee responsible for ESG-related matters, even if they did not vote directly for the proposal.

Of the companies that had both an ESG proposal and a committee associated with ESG—such as an Environment, Health & Safety committee—the median approval of a director on an ESG committee between 2015 and 2017 was 98.8%, on par with director ratings across the index. During the same timeframe, the median approval of an ESG shareholder proposal at these companies, while higher than all ESG companies, still failed to reach 30%. Like Say on Pay voting, no direct correlation appears to be present at a broad level.

However, approval ratings for directors on ESG committees at the companies with proposals have dropped since 2015. That year, 97.0% of directors on ESG committees for companies that received ESG proposals earned at least 90% approval. That number dipped to 91.9% the next year, and resurged slightly to 93.1% in 2017 but was still well below the approval ratings two years prior. With any approval rating below 95% considered a cause for concern, these shareholder votes could potentially receive more attention than a few extra percentage points in favor of an ESG proposal that is not expected to pass. 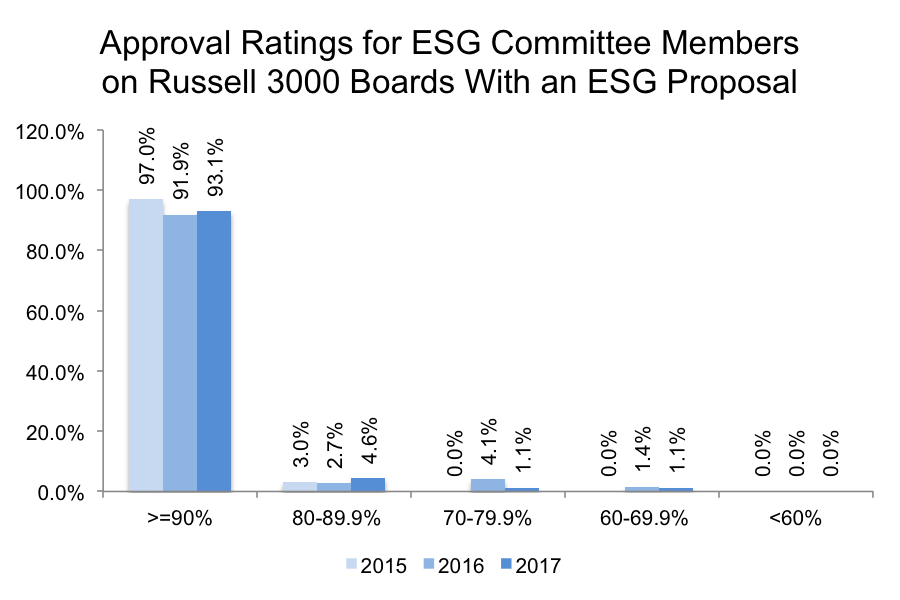 There is no doubt that environmental, social and governance proposals are gaining popularity and represent an important avenue for shareholders to have their voices heard. Companies are beholden to respond to proposals in proxy statements and, at the very least, are made aware of the importance of a particular issue. However, the proposals themselves rarely pass. While there are many ways these shareholders can push for a passing vote, speaking out on Say on Pay or disapproving of directors may offer them another avenue to engage with companies. While the data does not show a direct relationship between these voting outcomes, in order to get more proposals passed, shareholders may be able to ensure that they get the attention of the board through other votes. Any way one spins it, the power still rests in the hands of the shareholders.