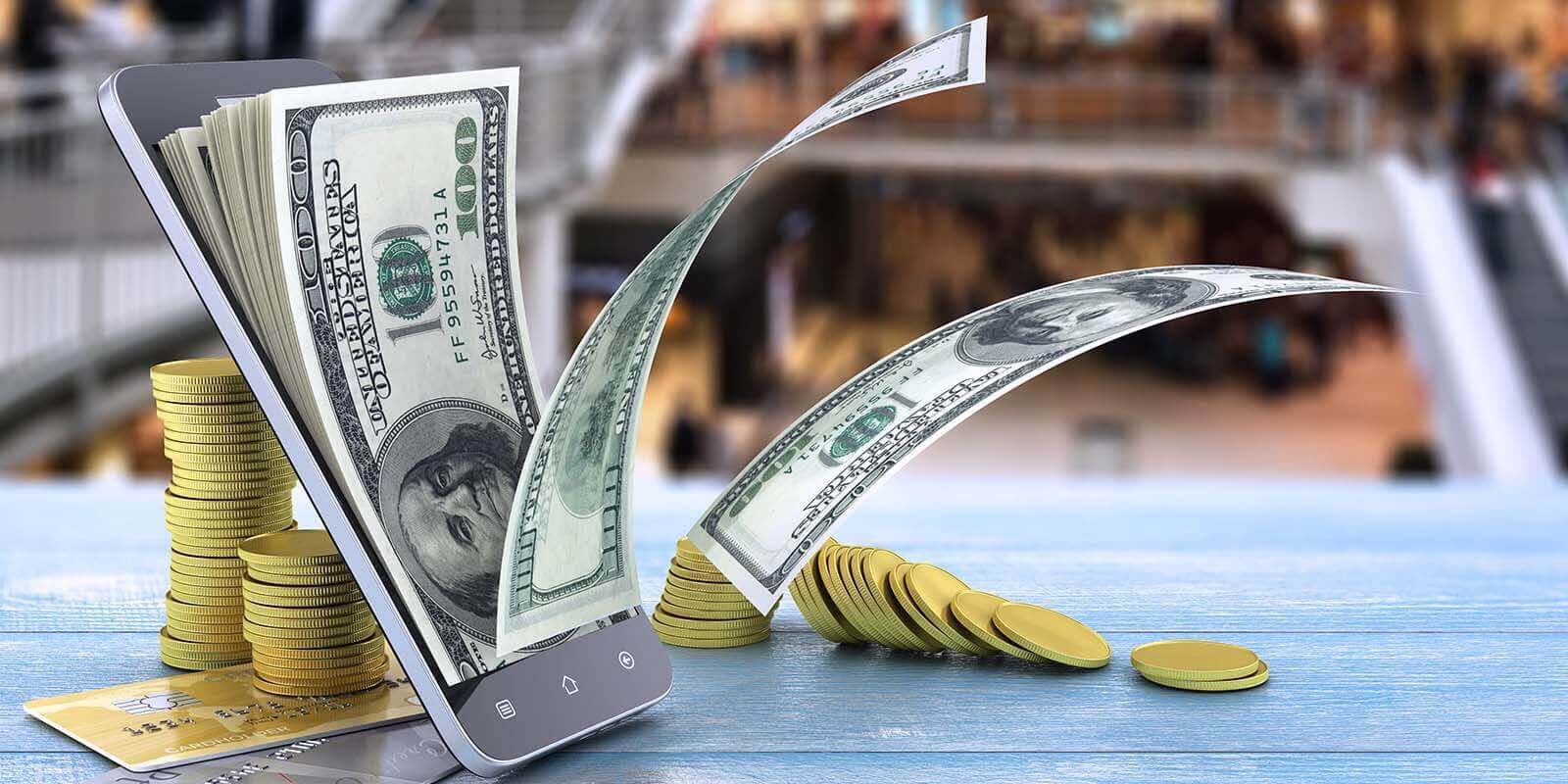 The company is seeking a valuation that would rank among the largest initial valuations of recent IPOs in the internet and technology space. Equilar examined seven other recently IPO’d companies to see how Snap’s CEO compensation compared in the company’s final year before the offering. Below are the companies included in the study alongside their valuations at IPO.

Mr. Spiegel received a larger salary in the year leading up to Snap’s IPO than any other CEO in the study—without accounting for inflation. His 2016 salary of $503,205 slightly edged out the $500,000 Match’s Sam Yagan received in 2014 and the $483,333 paid to Facebook’s Mark Zuckerberg in 2011. Notably, the company disclosed that the terms of Mr. Spiegel’s October 2016 offer letter will reduce his base salary to $1 following the offering. Many of these individuals, including Mr. Zuckerberg, also now receive $1 salaries each year. 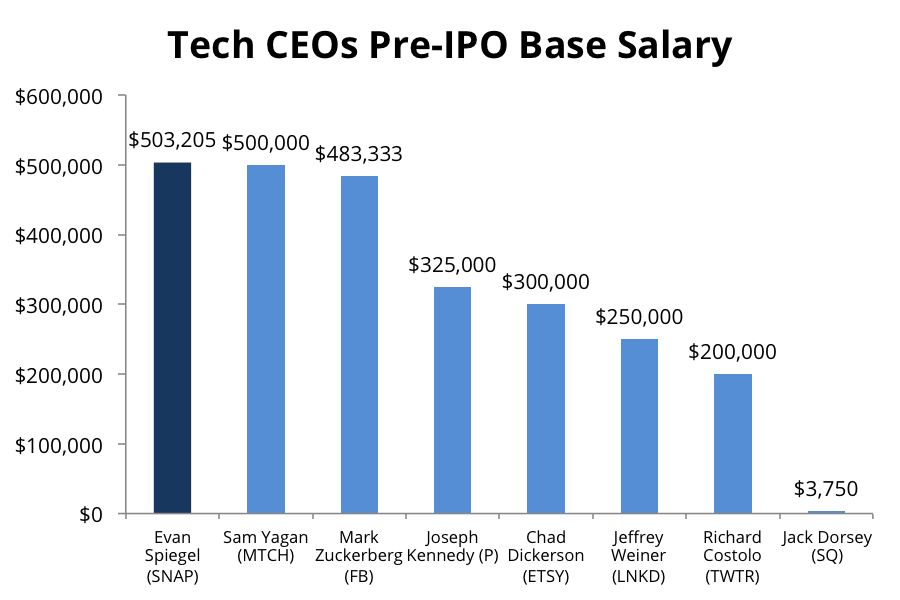 Snap Inc. also awarded the largest CEO bonus, both in absolute terms and as a percentage of salary, and the largest CEO perquisite package. None of the CEOs in the sample received more than $10,000 in perquisites other than Mr. Spiegel and Mr. Zuckerberg, who each received more than $750,000 in the year before their IPO. In both cases, this benefit was related to personal security, which is common among tech CEOs, according to a recent Equilar study. Nearly 99% of Mr. Spiegel’s 2016 perquisites were related to his personal security, and nearly 90% of Mr. Zuckerberg’s 2011 perquisite value paid by Facebook were aircraft costs “in connection with his comprehensive security program.” As a note, Mr. Zuckerberg has since received compensation in the form of security benefits in the millions of dollars each year. 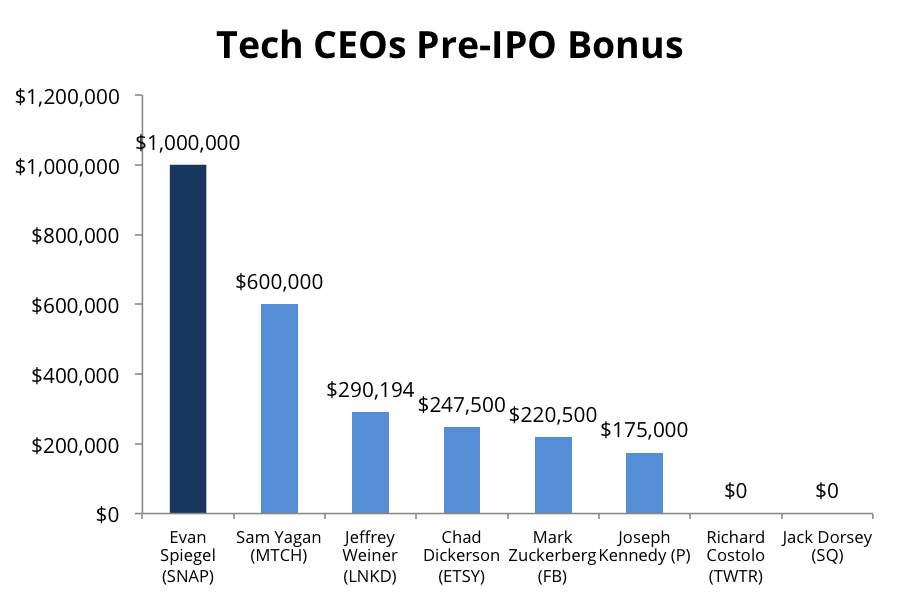 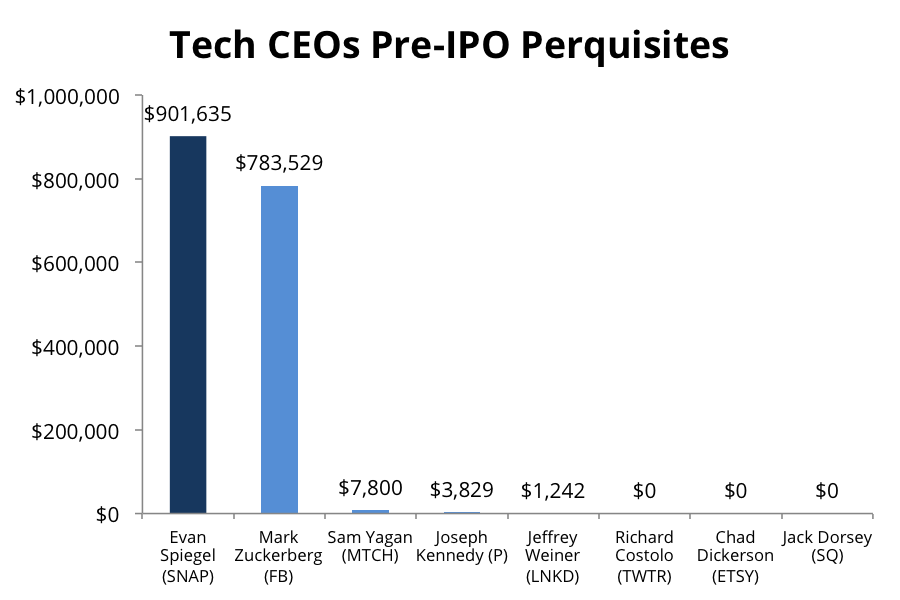 All told, Mr. Spiegel received substantially more compensation in the form of cash and perquisites than the other CEOs. It is worth noting that Snap’s expected initial valuation is substantially larger than most of the other technology companies included in the comparison, although still far below that of Facebook. 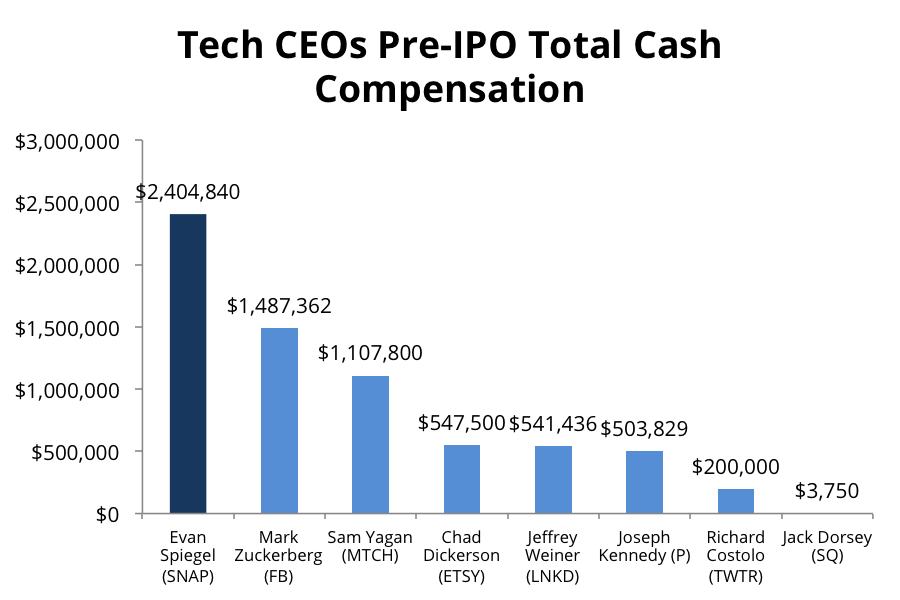 While equity is generally considered a useful form of compensation in aligning executive interests with those of shareholders and as a retention tool, CEOs at companies about to go public often already have large equity holdings, particularly when the CEO is also a founder of the company. Mr. Zuckerberg, Mr. Spiegel and Square’s Jack Dorsey were all founders of their respective companies, and maintained more than 20% ownership prior to the initial public offering. Mr. Spiegel had by far the largest reported ownership level of any CEO in the study, at 44.3%. On the other hand, Costolo and Yagan were the only two CEOs in the sample with ownership levels below 2%, thus providing more context for why they may have received substantial equity compensation in comparison. 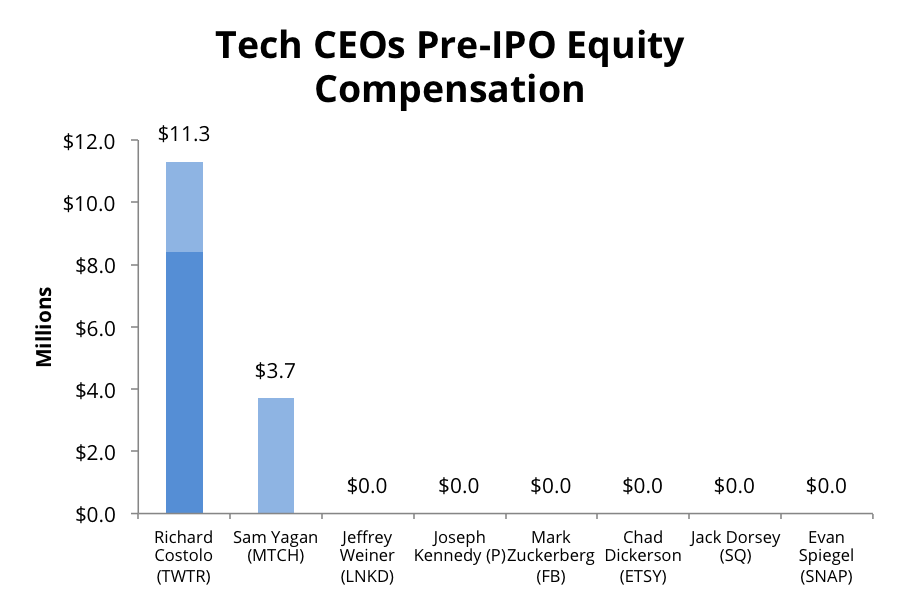 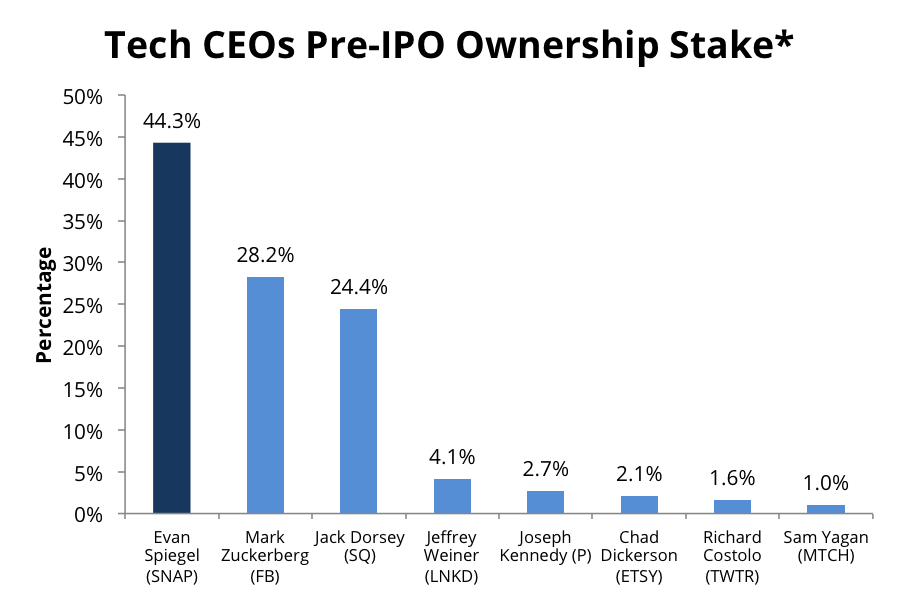 *Ownership percentages represent voting power reported in the S-1 filing. For Mr. Zuckerberg, this amount excludes 30.6% of the company's voting power consisting of shares held by other stockholders over which Mr. Zuckerberg exercises voting control. 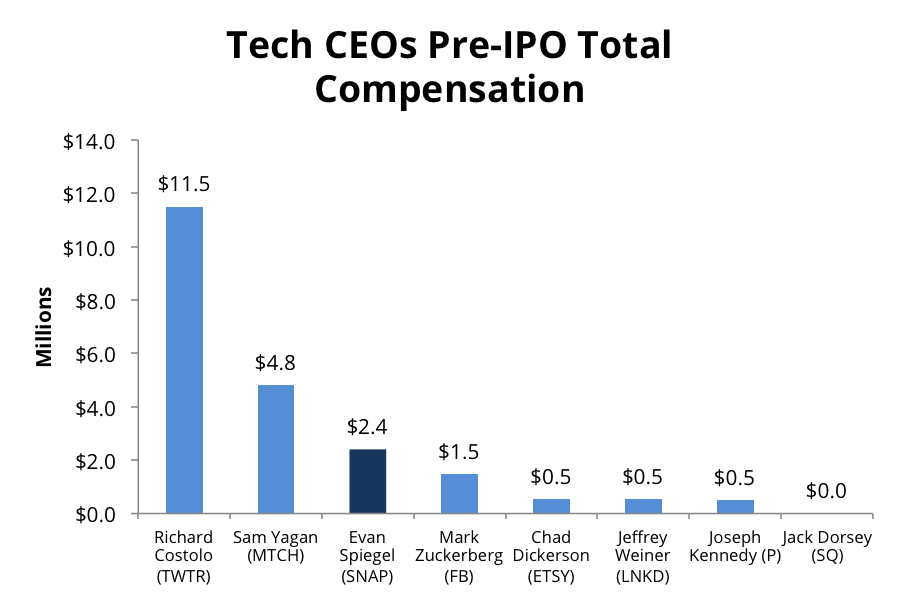 Snap’s situation is unusual with regards to shareholders’ ability to voice their opinions on the company’s executive pay practices. The company’s proposal (as of February 9) would not require shareholder votes on executive compensation packages, or Say on Pay votes. In addition, the company plans to offer exclusively non-voting shares, substantially limiting shareholder access to and influence over company operations. Lastly, Snap’s co-founders maintain a substantial majority of the company’s ownership, with a combined 88.6% of the total voting power before the offering, and that majority will persist following the public offering. For all of these reasons, Snap’s board of directors will likely maintain a level of agency over compensation program design atypical at large, publicly-traded companies.

While Snap’s shareholders will not have the same ability to voice their executive compensation practice preferences as shareholders at other publicly traded companies, it will be interesting to see how the company’s pay programs evolve and how receptive the company is to shareholder input and engagement in the coming years.

For information regarding the studies referenced in this post and to purchase the underlying datasets, or to learn more about Equilar’s Research Services, please contact the Equilar research team at research@equilar.com..