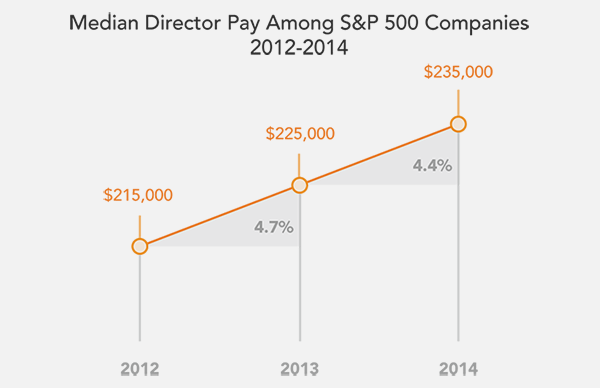 Median director pay among S&P 500 companies has increased significantly in recent years. According to the latest Equilar research, director retainers reached a median $235,000 in 2014, up from $215,000 two years prior. In response, shareholders see the amounts board members are paying themselves and asking whether this is justified.

In fact, scrutiny from stakeholders has gone as far as the courtroom in some instances, where shareholders have sued companies on the grounds of excessive pay and lack of compensation caps. In these cases, the plaintiffs are drawing comparisons to lesser paid board members at peer companies, alleging that the defendants are benchmarking to “aspirational peers,” i.e. justifying their pay by cherry-picking peer groups instead of aligning their pay with companies that are reflective of their actual market position.

While each company’s case is individual unto itself, here are a few general trends determining director pay.

Directors are taking on a combination of increased risk and increased responsibility, especially in light of Dodd-Frank and its subsequent regulatory changes. Board directors are now facing more disclosures, regulations, guidelines and a more complex business environment, and are accountable for communicating their companies’ strategic and financial goals.

Then you have the risks: Aside from shareholder scrutiny on pay, other forms of shareholder activism leaves boards vulnerable to restructuring or even replacement. Ironically, activism often manifests because of good performance and pressure to outperform, in contrast to a common conception that activists come in to takeover and overhaul poorly running companies. These responsibilities or risks aren’t inherently “bad” for boards, and increased transparency and communication has led to greater shareholder engagement. But they also command more time and attention from directors.

Director compensation, like executive pay, is also increasingly being tied into shareholder interest. This has manifested in a rise in equity awards for directors. In 2014, the median director retainer package was 56% equity vs. 44% cash.

But unlike executive pay, where we’ve seen pay for performance and realized pay being tied to the company, experts say it’s important that director pay has less volatility. Indeed, the data shows that nearly all director packages among S&P 500 companies include some cash element, and the prevalence of units has risen while stock and options are decreasingly part of packages. 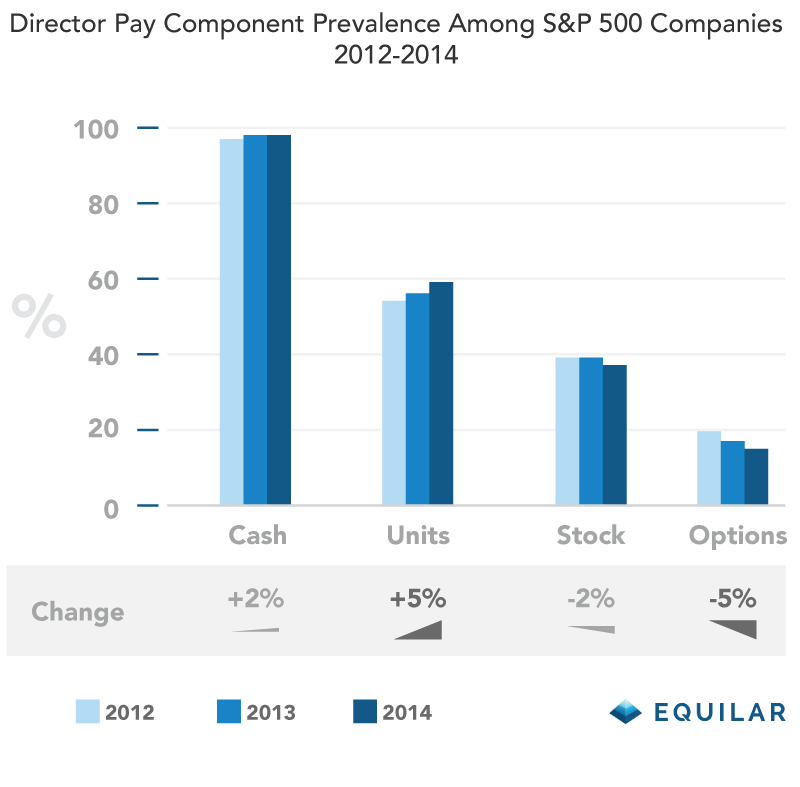