Weighing in on Performance Metrics 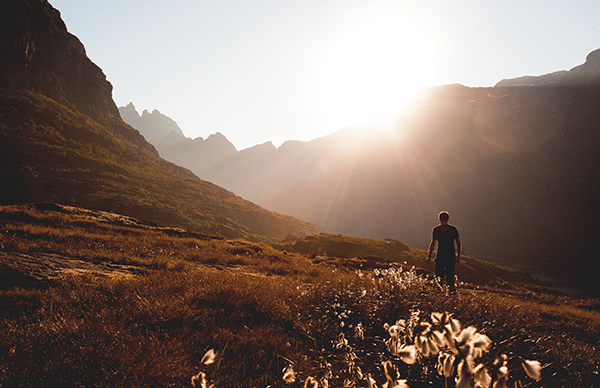 When it comes to doling out long-term incentive plans, shareholders and companies both hold vested interests in how awards are structured. Not only do equity awards contribute to the retention of executives, but they also set the tone for the direction in which a company aims to grow. This direction is communicated to the executive team via performance metrics.

Analyzing these metrics is a tricky matter, however. The simplest method is a prevalence calculation—a count of each metric employed divided by the total number of awards—which shows the most popular metrics among a given group of companies. Equilar recently conducted a custom study on a sample of 36 large-cap companies in a peer group consisting spanning the basic materials, consumer and industrial goods, and conglomerates sectors. The study found that total shareholder return (TSR) was by far the most prevalent metric for long-term equity incentives, and two-thirds of the sample companies gauged performance pay according to TSR. 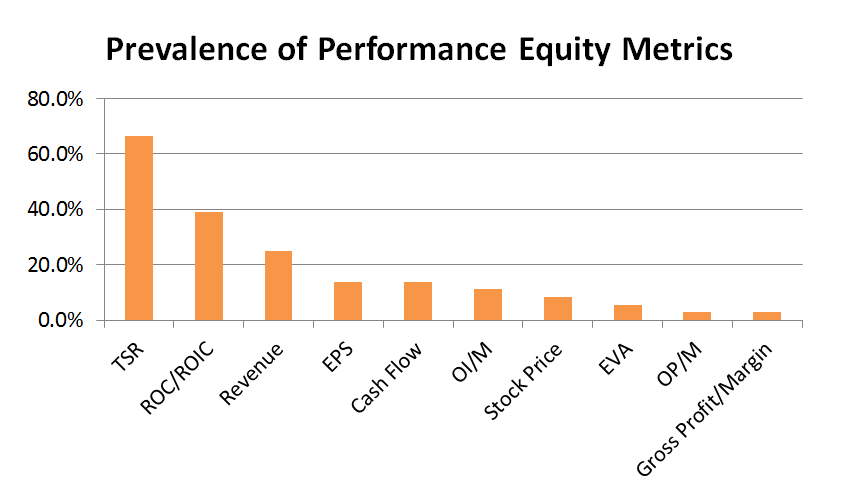 These results are not unexpected. Total shareholder return (TSR) is the baseline for shareholder interests and serves as good indication of company growth, while return on capital (ROC)—the second-most prevalent metric utilized by this set of companies at 38.9%—is a yardstick for growth potential. Revenue, earnings per share (EPS) and cash flow are also usual suspects on financial statements, easily tracked, benchmarked and compared.

The creation of an incentive plan is not simply mimicry of the ubiquitous, however. Direction entails focus on a select few objectives, rather than a watered-down weighting of the most popular metrics. In this pursuit, this study drew the median weightings of each metric. The results showed that the highest median weights were found in economic value added (EVA), operating profit/margin (OP/M) and stock price, which towered above the others at 100%. 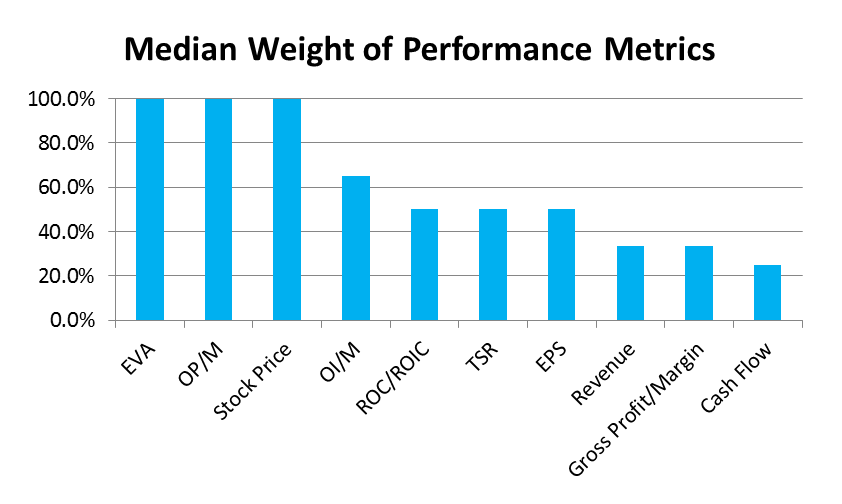 These two graphs together create a more complete picture. While ROC and TSR are far and away the most popular metrics, they are not considered important enough to constitute a company’s sole focus. On the other hand, companies that home in on a single area of growth tend toward these more highly weighted measures of EVA, OP/M and stock price. For analyses such as this, Equilar’s Incentive Plan Analysis captures not only which metrics are used, but also in-depth figures concerning weighting, scales and much more.