How Board Skills Vary by Director Age Groups 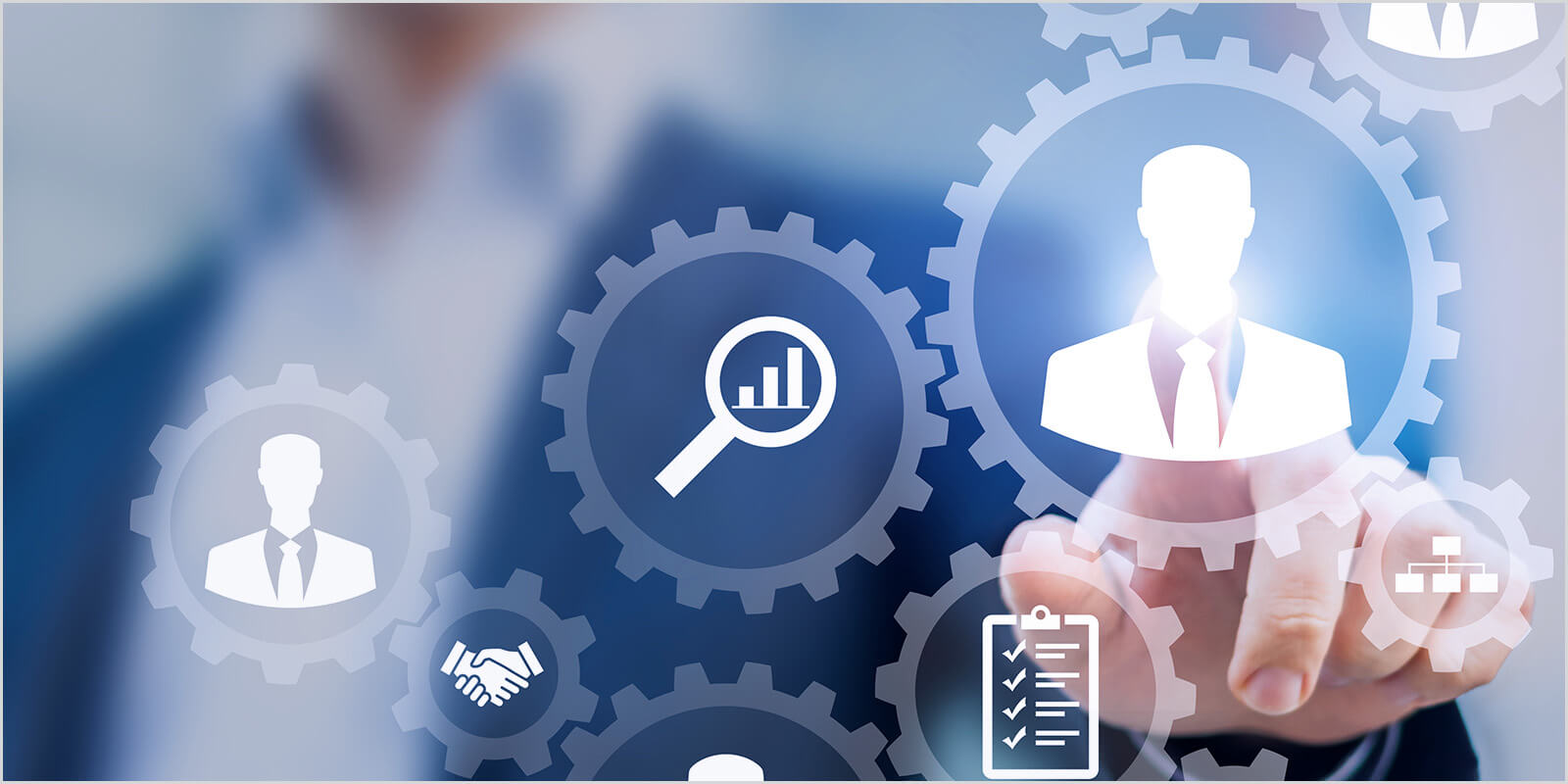 Members of public company boards of directors range in age from early 20s to well over 75. It is true that most directors are closer to retirement age—the median age for a director at Equilar 500 companies was 62.7 in 2017—and board members over 60 are more prevalent overall than their more youthful contemporaries. There are signs that this situation is changing, however, in an effort to improve company overall performance. Though a recently published article featuring research from Equilar found that the age of directors at a company may not have a direct effect on performance, many companies are taking an active approach to refresh stale and aging boards by introducing mandatory retirement ages or term limits.

The business landscape is always changing, and companies are competing to stay relevant. Cognizant companies, aware of this fragile relevancy, often look to younger board members to rejuvenate their strategic approach and theoretically stay ahead of the game.

Younger board members are thought of as providing new perspectives. To examine how director skills compare across age groups and identify whether this is true, a new study from Equilar looked at various age groups—between the ages of 20 and 40, 41 and 50, 51 and 60, 61 and 70, and those over 71 years old—to see what skills each group has to offer. The study was limited to 383 companies that disclosed board matrices in their annual proxy statements, inclusive of 3,570 board members.

Despite the differences in age groups and the business environments in which each company operates, the skills that are able to span across industries were most common. For example, regardless of age, the top two most prevalent skills of board members were finance and governance. The youngest age group, those under the age of 40, had the largest prevalence of corporate leadership skills. Additionally, a large amount of directors younger than 50—over 30% in each age group—were said to have skills involving strategy.

Similar skill prevalence among the three older groups also appeared in the data. At least 36% of board members older than 50 were listed with C-suite executive experience, risk management or human resources as a skill. On the flip side, among the three older age groups the least common board skills were consistent as well. Compliance and energy were named as skills for three oldest age groups the least amount of times. Similarly, energy was the least prevalent skill for younger age groups, though approximately one in six directors in that age range had experience in this category—a higher prevalence than any other group. 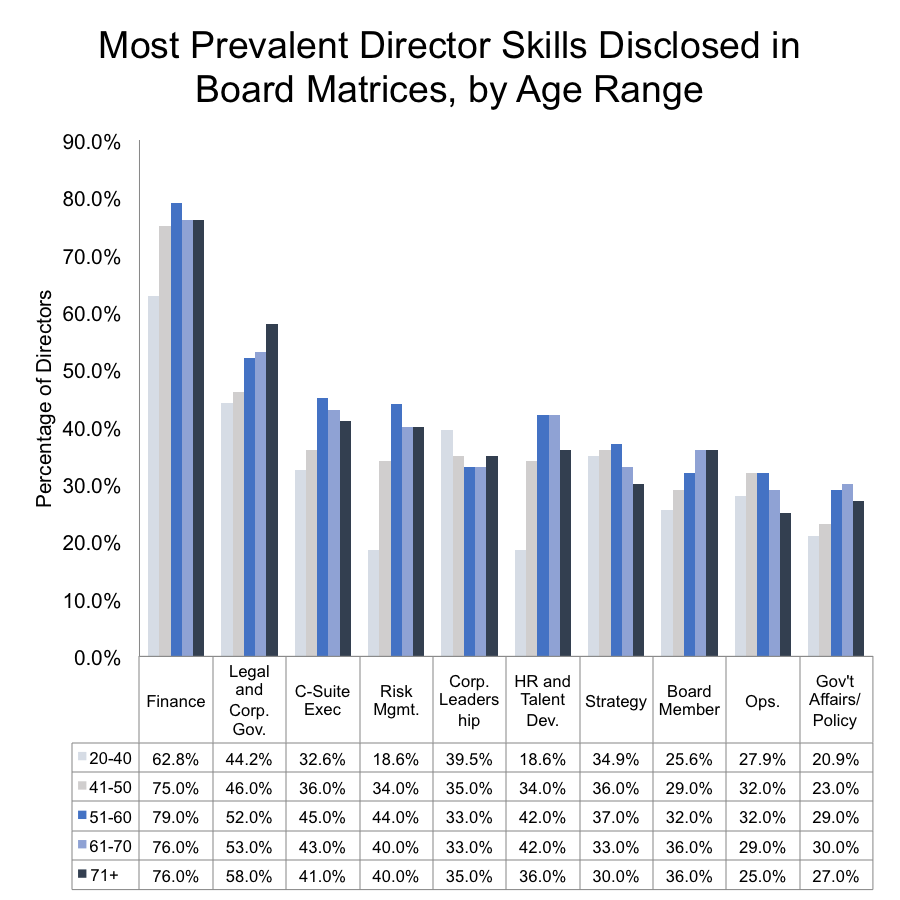 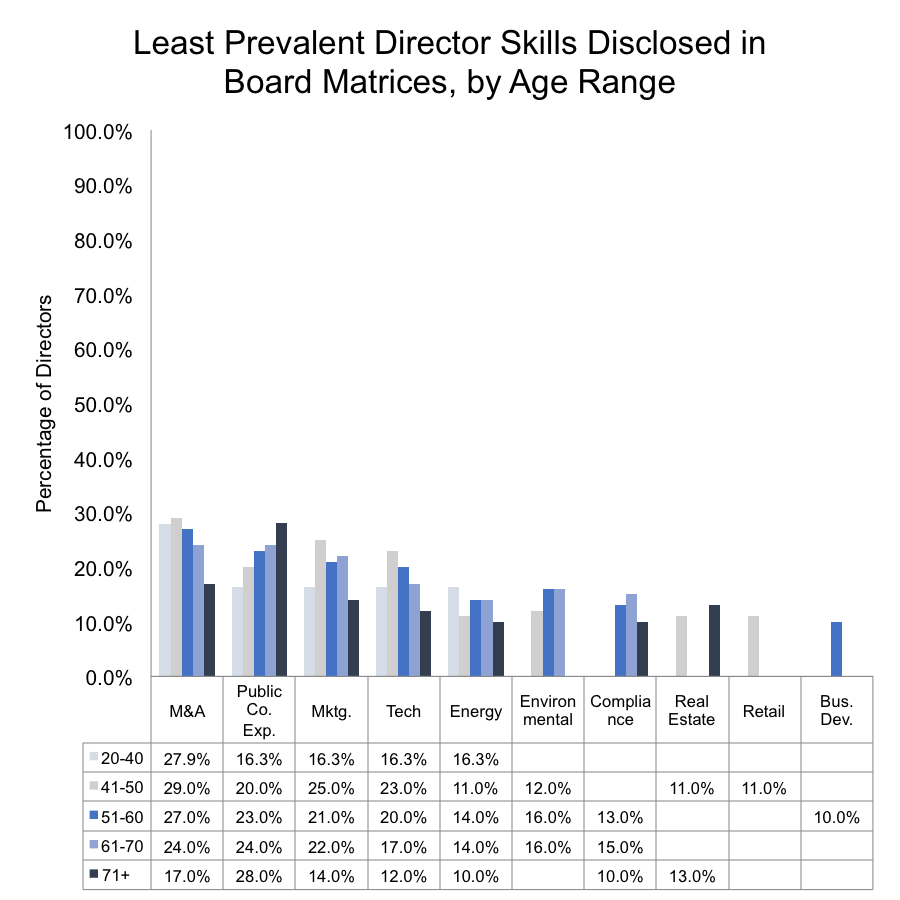 In some cases, the two groups with the largest age gap between them shared similarly disclosed skills. For example, directors in these two groups were least likely to have marketing experience. Furthermore, these two age groups had the lowest disclosed technological expertise.

However, there are differences in the skills of the oldest and youngest director age groups, and while some are to be expected, others may come as a surprise. For instance, as one might expect due to years under their belts, directors in the 71 and over group has considerably more directors with legal and governance skills as well as public company experience (58% and 28% respectively). Perhaps more surprisingly, those between 20 and 40 came out ahead with regards to having corporate leadership and strategy (40% and 35%, respectively) as opposed to their oldest colleagues (35% and 30%, respectively). 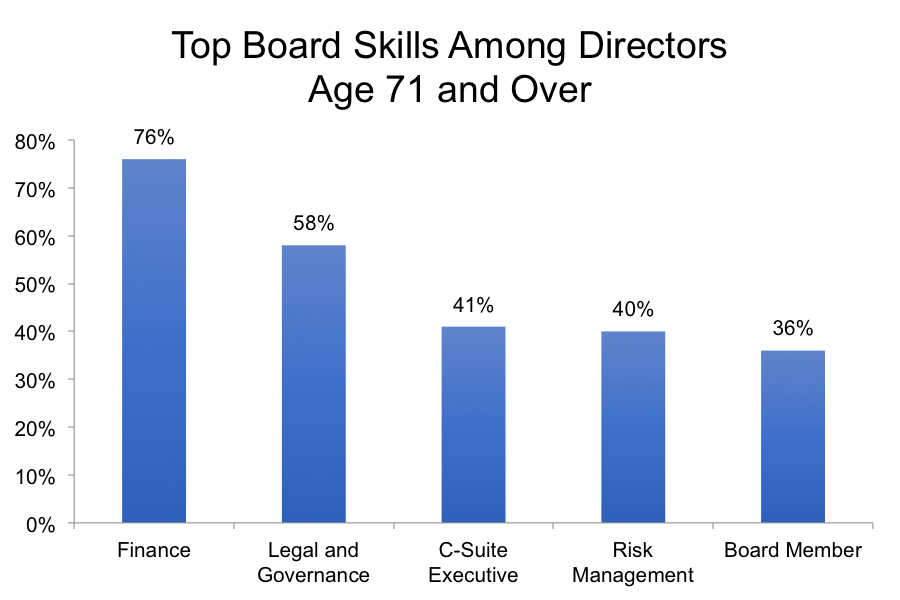 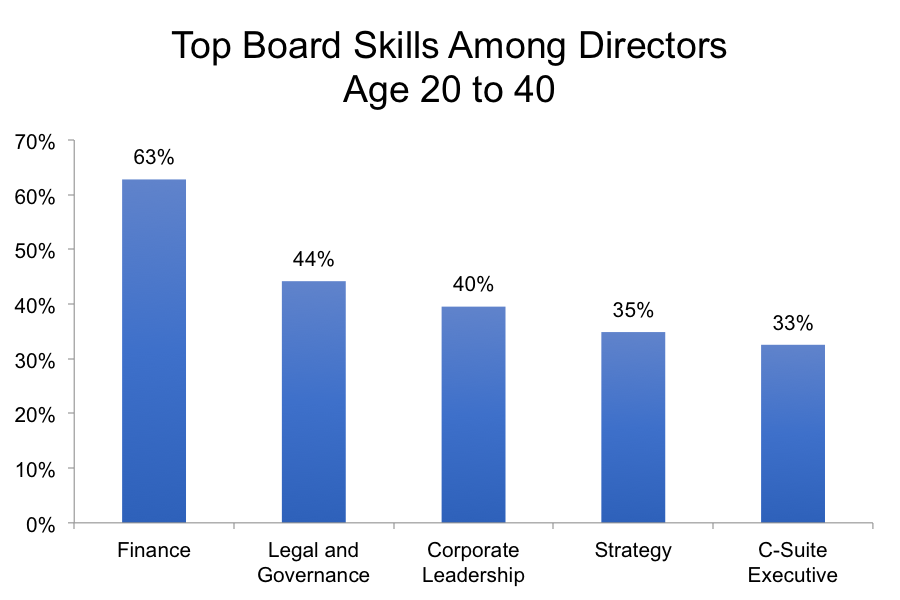 Regardless of age, the prevalence of certain skills is relatively consistent. Both finance and governance skills were the most common across all age groups. However, once skills become more specialized, the data shows a departure between age groups. While some skills, such as public company experience, appear to come with age, other skills may become less important as the business climate changes and directors age out of board membership. This could also be due to the nature of certain industries and the ages of the board members and leaders within them.

As of now, the two oldest age groups, 61 to 70 and over 71, still make up the majority of the composition of boards, and among the 3,570 directors with disclosed board skills, 52% of them are over 60. These directors will eventually be replaced, and as the data suggests, certain skills will continue to be relevant, while others may become more prevalent with the introduction of younger directors to the board. As board matrices become more of a mainstay in company proxies, they will provide a clearer picture of how the new generation of board members looks in terms of the allocation of skills. 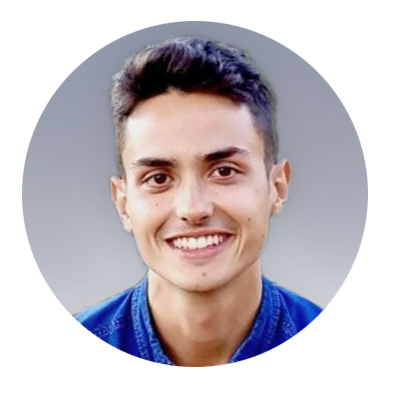