Comparing Board Diversity by Company Size, Region and Sector 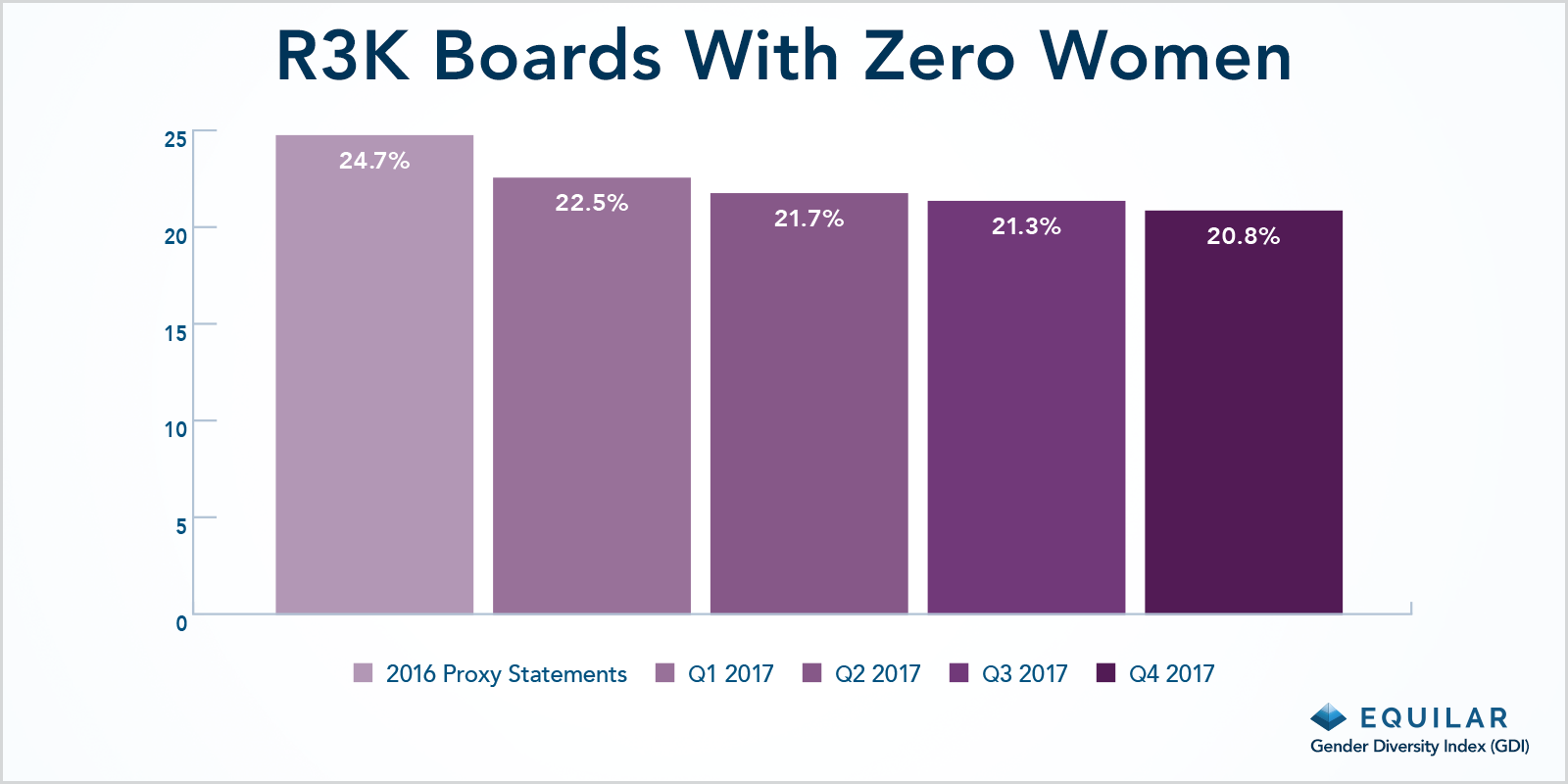 Despite heightened scrutiny and investor activity concerning board diversity in recent years, increasing female representation on public company boards remains sluggish. According to the recent Equilar Gender Diversity Index (GDI), a quarterly study examining women on boards at Russell 3000 companies, approximately 16.5% of Russell 3000 board seats were occupied by women at the end of 2017, up from 15.9% in Q1. Moreover, one-fifth (20.8%) of the boards in the index still had no female directors, and only 1.1% of boards had reached gender parity by the end of 2017. Although some progress has been achieved, these statistics shed light on the continued push for diversity.

A total of 80 companies in the Russell 3000 have at least 40% or more of their board seats occupied by women, according to Equilar data. By comparing the characteristics of these boards relative to those with no female directors, a few notable disparities are apparent. For example, companies with over 40% female representation on their boards have notably higher median market capitalization and revenue than companies with no women on their boards. 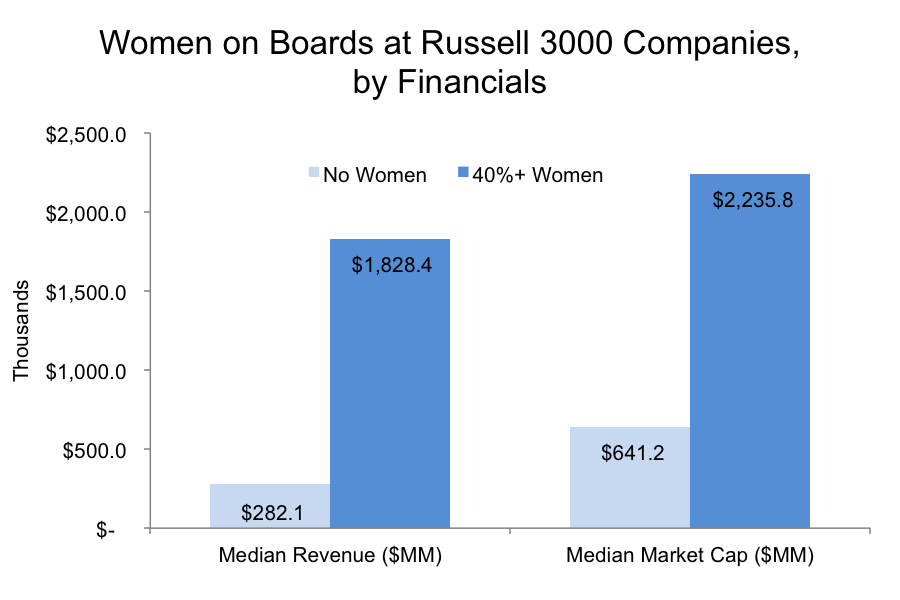 The fact that larger companies tend to have more diverse boards is perhaps unsurprising, as these companies may be under greater scrutiny and pressure from shareholders, proxy advisory firms, and the general public. Furthermore, smaller companies may face greater obstacles in attracting and retaining female directors for a variety of reasons, such as fewer resources and on-hand capital, or they may operate in industries or regions where there is a lack of female leadership- whether due to established corporate cultures or just pure numbers. Indeed, the Gender Diversity Index also found that Fortune 500 companies and Fortune 501-1000 companies had far higher representation of women than Russell 3000 companies not included in those indices. 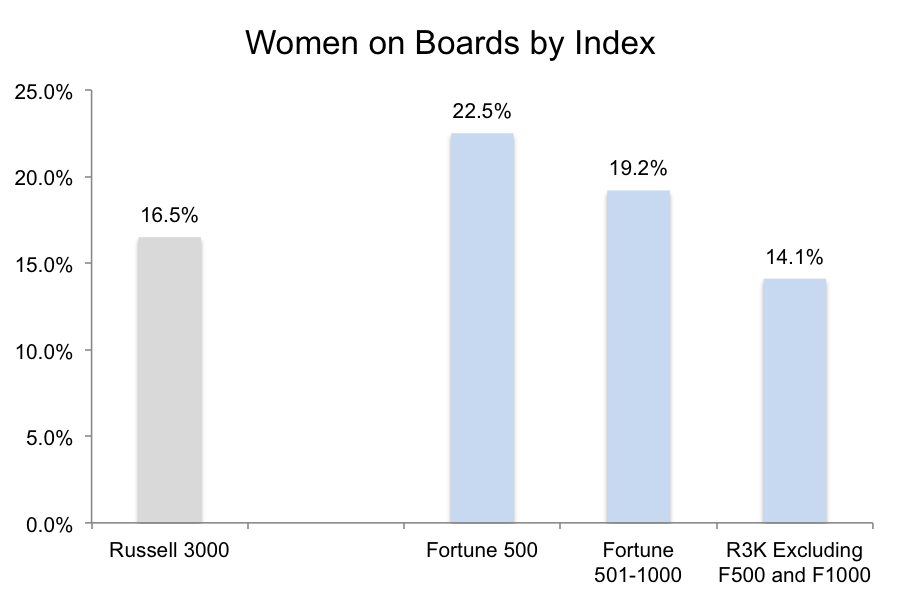 Board diversity differs by geographic location as well. Using U.S. Census region divisions, the study found that company boards with high female representation are most concentrated in the West and Midwest regions, while boards with no women are most likely to be headquartered in the South. However, despite having the highest share of boards with more than 40% women, the western region also had the second-highest share of all-male boards. 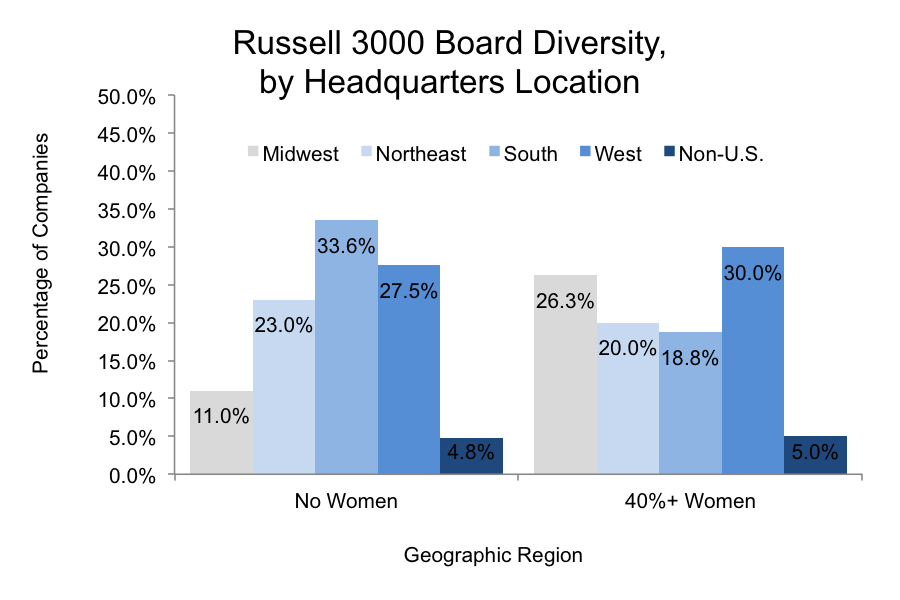 Diversity on boards varies widely between industry sectors as well. Notably, almost 40% of the boards with high female representation are in the services sector, a broad category that encompasses industries ranging from staffing and outsourcing services to restaurants and specialty retail. Many of the boards with high female representation in this group operate in the "specialty retail" or "apparel/department stores" classifications, including companies such as DSW Inc., Etsy, Macy's, and Ulta Beauty. The services and consumer goods sectors combined to represent 56.6% of all boards with at least 40% female directors. This finding may not be surprising given the consumer bases of these types of companies.

On the flip side, technology companies are commonly criticized for lacking diversity among both employee workforce and management, and as the data depict, the technology sector's share of companies without any women directors almost triples its share of companies nearing or achieving gender parity. Tech companies had the highest share of all-male boards, with 20.4% of the total. A substantial portion of the boards that lack female directors operate within the technology, financial and healthcare sectors, with the three sectors accounting for 56.1% of Russell 3000 boards with no women. 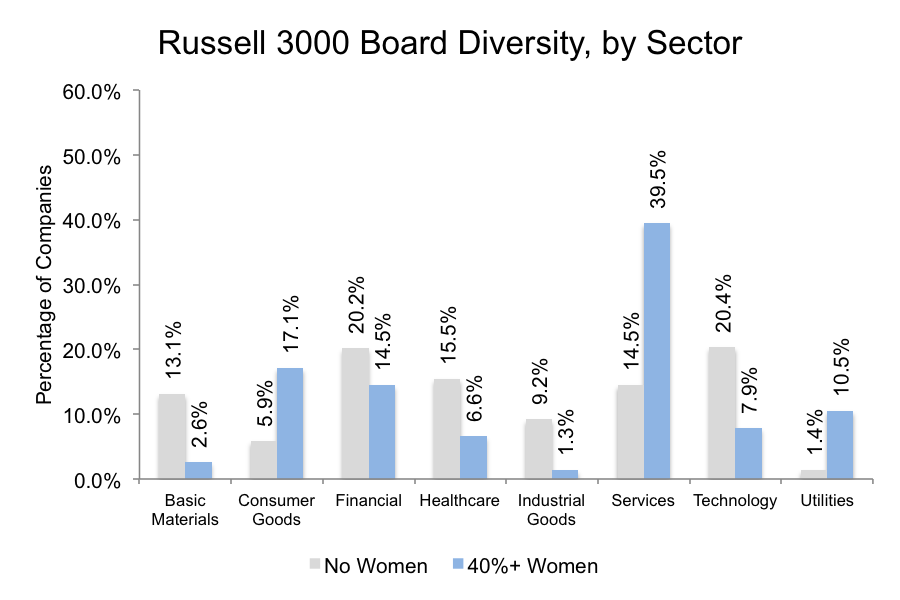 As the data show, factors that may influence the presence of female directors on public company boards-or lack thereof-vary, and each company has a unique approach to addressing gender diversity in the boardroom. Although progress throughout 2017 was slow, the addition of women to boards did accelerate. In Q4, 28.7% of new directors added to Russell 3000 boards were women, compared to 24.3% in Q1 of 2017. As 2018 progresses, the rate of new female directorships should continue to climb if current trends persist. 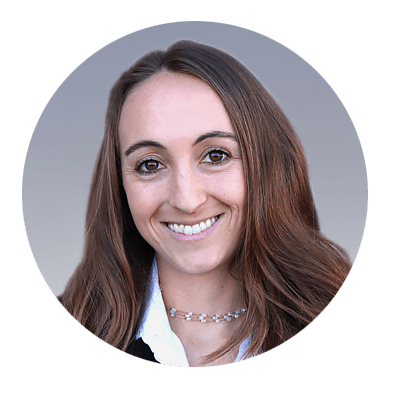