For a third consecutive quarter, the Equilar Gender Diversity Index (GDI) increased. The percentage of women on Russell 3000 boards increased from 16.9% to 17.7% between March 31 and June 30, 2018. This acceleration moved the needle, pushing the GDI to 0.35, where 1.0 represents parity among men and women on corporate boards. 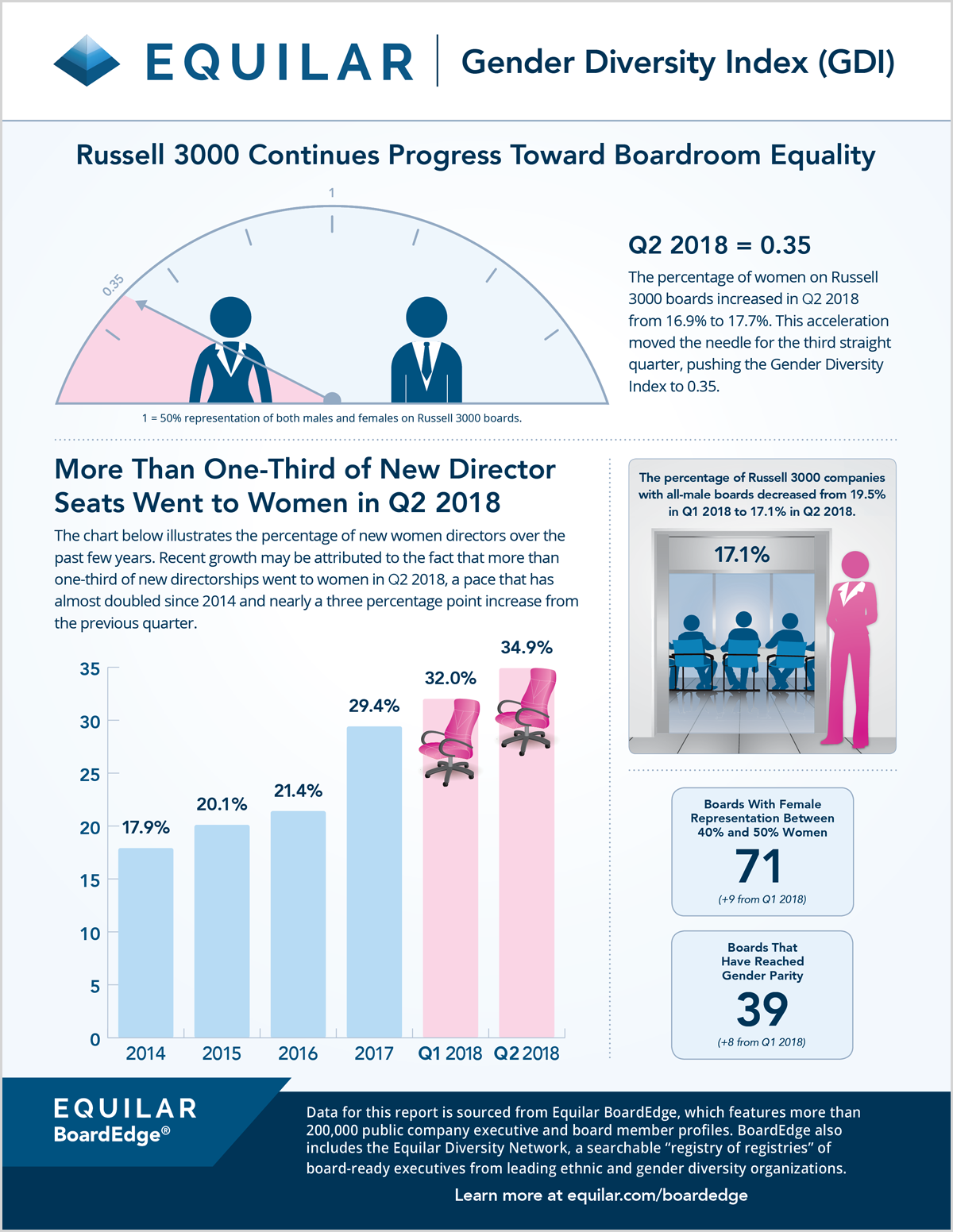 One of the primary drivers of this steady GDI increase is the number of new directorships that have gone to women over the last few quarters. The chart below illustrates a consistent pace of growth of female directorships. In Q2 2018, more than one-third of new directorships went to women—this is a near three percentage point increase from the previous quarter and a pace that has almost doubled since 2014.

“In the first half of 2018 over 30% of newly-elected directors were women, which we believe indicates that companies are changing their approach to diversity,” said Brigid Rosati, Director of Business Development at Georgeson. “It seems that companies are beginning to better understand the benefits that a more diverse board can bring, but are also in some cases responding to signs of increased interest from investors, including in the way they vote in director elections.” 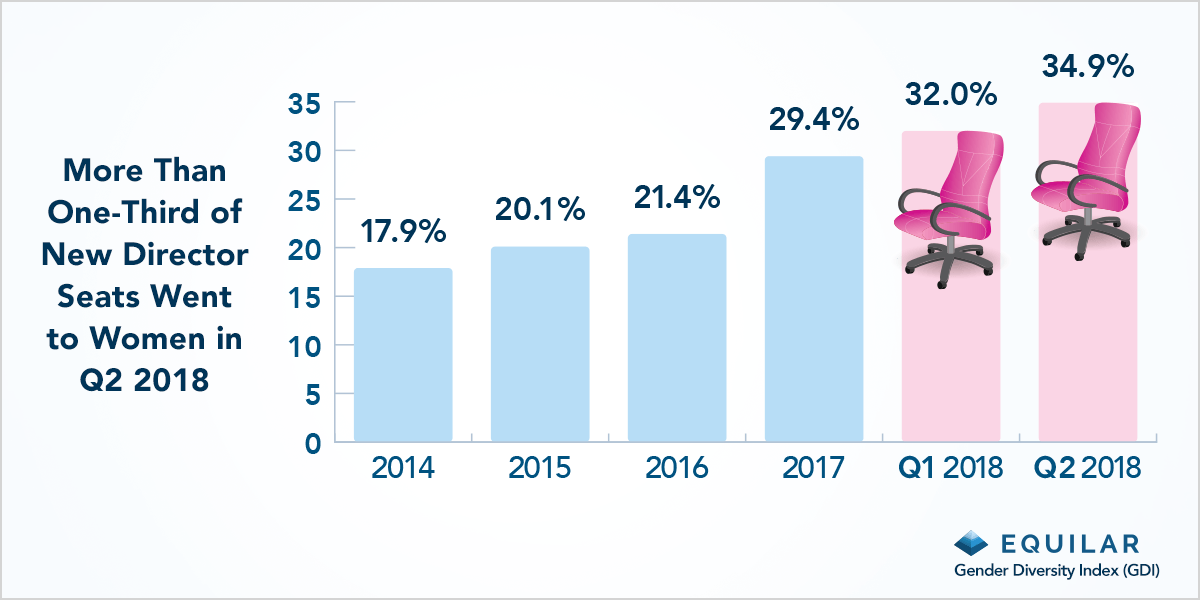 In Q1 2018 the percentage of all male Russell 3000 boards fell to 19.5%, the first time ever that this figure sat below 20%. That figure continued to dip in Q2 2018, falling to 17.1%--a 2.4 percentage point drop. This data is certainly a promising sign that boards are making a concerted effort to promote diversity in the boardroom and that male-dominant boardrooms are becoming less prevalent. However, this is still a relatively sizable figure that indicates possible hurdles do indeed remain.

“Progress on diversity continues to be slow but it is continuing to move for the most part,” said Susan Angele, Senior Advisor of Board Governance at KPMG’s Board Leadership Center. “Depending on the board’s own network, it may take a larger investment of time and effort to find the right person to add diversity as well as skill set, and having a diversity champion on the board driving the search may make a difference.”

Pressure Begins to Mount From Investors and Lawmakers

One of the many reasons that boards have lagged progress on the topic of diversity is that historically, there has been little pressure from investors or other key stakeholders to regularly advocate for such initiatives.

However, over the last year or so, gender diversity has become an area of focus across corporate America. There have been numerous efforts from various sources including institutional investors, regulators and lawmakers. In the Q1 2018 GDI report, Equilar cited 2017 as being banner year for shareholder engagement around gender diversity on boards, beginning with State Street’s “Fearless Girl” statue of a young woman facing off with the Wall Street Bull to bring awareness to gender diversity.

The gesture won a major advertising award, but State Street also voted against hundreds of directors on boards that did not have women. Subsequently, BlackRock voted in favor of several shareholder proposals that requested more disclosure around diversity in 2017, and earlier in 2018, sent letters to all Russell 1000 companies that had fewer than two women on their boards.

“In addition to investor focus, I see a confluence of events that should play out over time,” said Angele. “The changes in the business environment and expectations on boards—including technological disruption, competition coming from outside the industry, changing demographics, culture and risk—all of these forces are making it more important for the boardroom to include directors with a mix of backgrounds and experience.”

Additionally, lawmakers have begun to get more involved with issues regarding gender diversity. For instance, by August 31, 2018, California could become the first state in the nation to mandate publicly held companies that base their operations in the state to have women on their boards. The legislation—SB 826—will require public companies headquartered in California to have a minimum of one female on its board of directors by December 31, 2019. That minimum will be raised to at least two female board members for companies with five directors or at least three female board members for companies with six or more directors by December 31, 2021. Violators of this legislation will be subject to financial consequences.

A new Equilar study examined how California fared against the United States as a whole with respect to women on boards. According to the study, California is slightly below other states and the national average in terms of average women on a board. California, on average, has 1.65 female members per board, whereas other states and the United States as a whole average 1.76 and 1.75 female members, respectively. 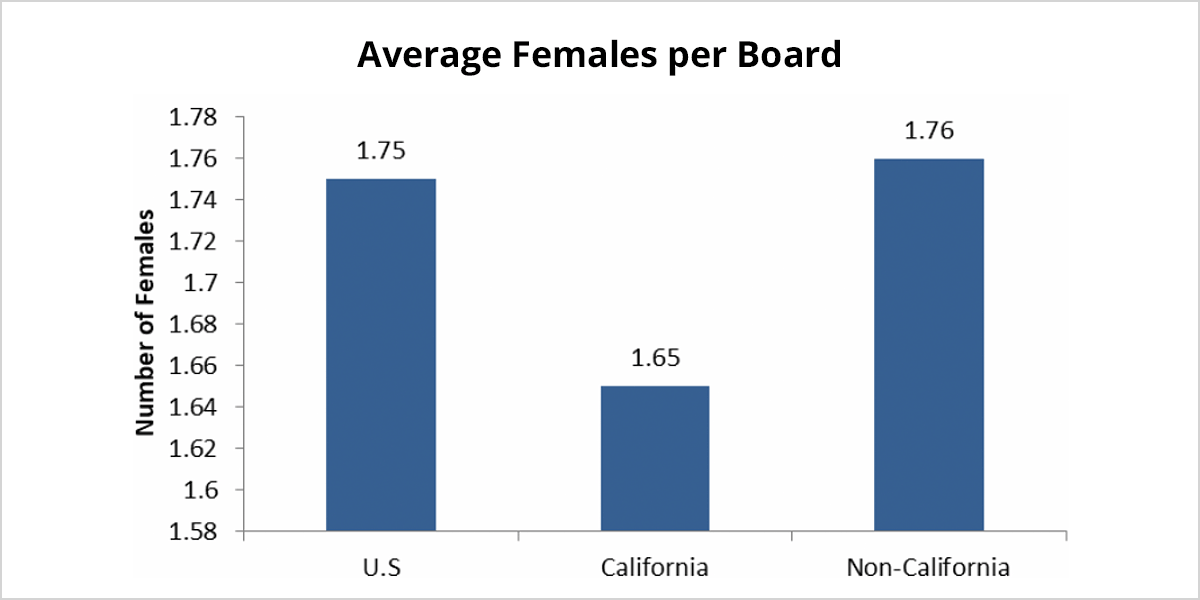 As legislators become more involved in matters of diversity, one might expect that progress toward greater female board representation will continue. The last few quarters alone have shown signs of progress, and this is before any significant quotas had been put in place. It would come as no surprise that the number of boards achieving parity continues to increase year-over-year following implementation of gender quotas across the nation.

Boards That Have Reached Parity Are Becoming More Prevalent

In combination of numerous factors, some previously mentioned in this article, since the inception of the GDI study, the number of Russell 3000 boards that achieved gender parity has steadily increased in most quarters. The Q2 2018 GDI revealed the largest quarter-over-quarter increase in the number of boards that have achieved parity to date, reaching 39—an increase of eight from the previous quarter and a spike of 18 from the end of 2016. The list of boards at parity is at the bottom of this article.

The number of boards that have between 40% and 50% is rising regularly as well. Collectively, 71 boards now have at least 40% women, up from 62 in the previous quarter.

“Several large institutional investors updated their proxy voting policies in 2018, which we think could continue to drive change beyond the significant progress we saw in the first half of 2018,” said Rosati. “Beyond this, we believe that continued media coverage and scrutiny means that we will see continued pressure from investors towards companies with zero women on their boards.”

The Equilar GDI is powered by Equilar BoardEdge, a database of more than 200,000 public company board members and executives. BoardEdge includes exclusive features that show how board members and companies are connected to each other, as well as the Equilar Diversity Network (EDN), a “registry of registries” of board-ready executives from leading ethnic and gender diversity partnerships, organizations, and publications.