About 25% of New Board Members Were Female, Showing Progressive Gains

Gender diversity on public company boards has become a hot-button issue in recent years, as investors and other governance advisors have shined a spotlight on the low representation of women in the boardroom.

Because progress has been slow, and women still only account for a fraction of the total board seats available, the discussion surrounding board diversity has been contentious at times. It’s not without good reason. In the latest Equilar Gender Diversity Index (GDI)—a quarterly update of female directors in the Russell 3000—just 15.9% of board seats belonged to women as of March 31, 2017, up from 15.1% for the full year 2016.

View or download key highlights from the latest Equilar GDI report by clicking the image below. 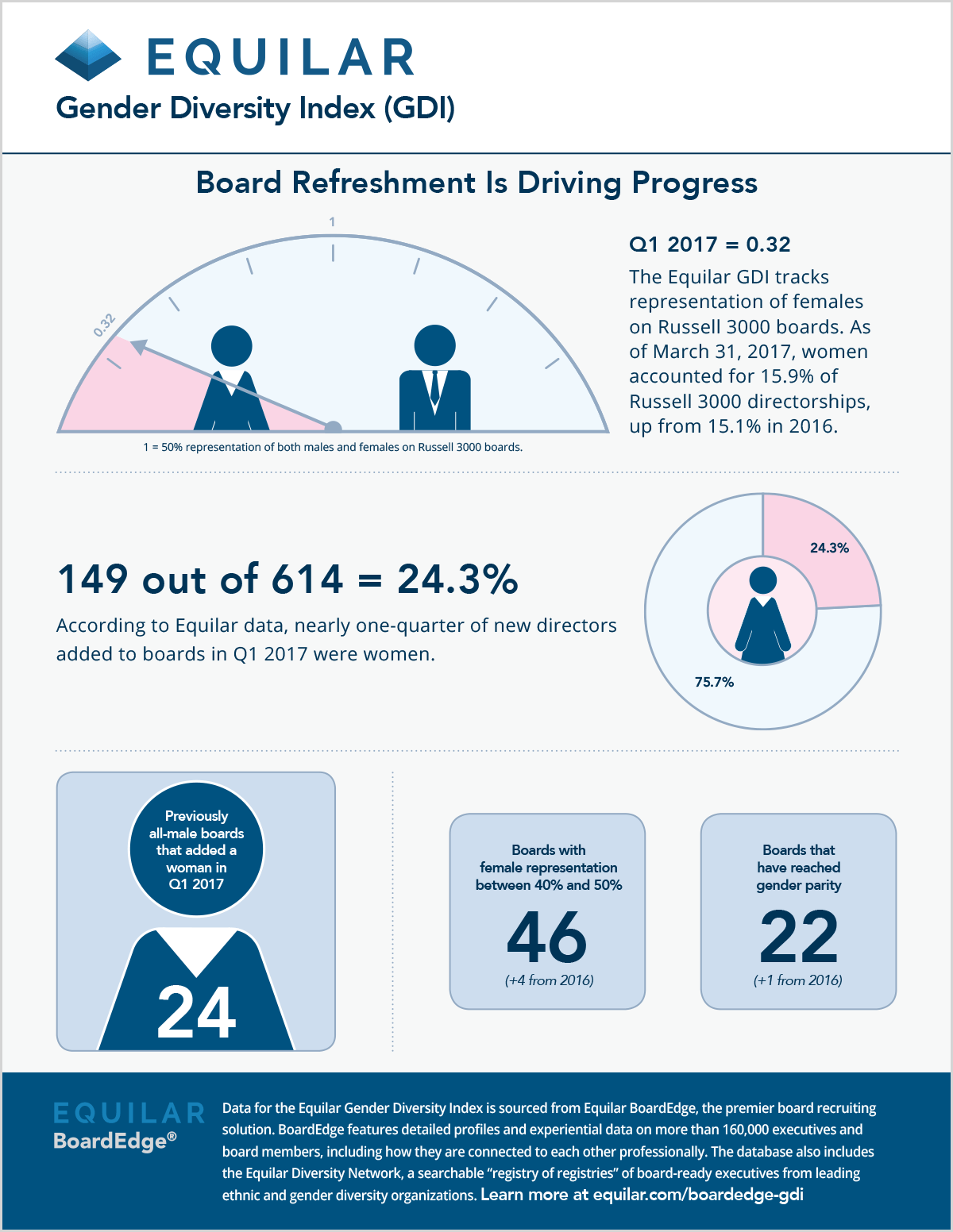 Data for the inaugural Equilar GDI report in February 2017 was collected on December 31, 2016, and to develop a benchmark for future studies, reflected board representation as of the latest filed proxy statement at Russell 3000 companies in each of the previous four years. In this and future releases of the report, Equilar will use information filed in the most recent 8-Ks to reflect real-time updates at the end of each quarter.

For Q1 2017, the Equilar GDI is at 0.32, with 1.0 being equal representation of both male and female directors on public company boards. As a point of comparison, 23.4% of board seats were occupied by females in the Equilar 100—a study of the 100 largest companies by revenue to file proxies by April 1.

Investors have bemoaned the fact that boards are not addressing refreshment quickly or thoughtfully enough, and indeed, at the current growth rate of approximately 3% annually, it would take more than 40 years to reach gender parity on boards.

“Institutional investors have long recognized that a diverse board is strongly linked to long term value,” said Susan Angele, Senior Advisor at the KPMG Board Leadership Center and a member of the Equilar Diversity Network (EDN) Advisory Council. “They are beginning to push harder on boards that in their view have not taken sufficient steps to seek out and recruit qualified female board members.”

Many results from the latest Equilar study do show meaningful progress, however. For example, 24.3% of directors added to boards in Q1 2017 were female. Out of 614 total board seats filled in that period, 149 went to women. For the full year 2016, just 21.4% of new seats went to females, which also represented an increase from years previous.


“While females are still vastly underrepresented on boards, it’s encouraging to see this growth,” said Belen Gomez, Senior Director of Research and Board Services at Equilar. “Board refreshment is not an easy process to institutionalize, but we’ve seen positive shareholder engagement and meaningful progress in addressing diversity when programs are put in place to assess and evaluate the board regularly.”

“There still is a long way to go, but there is no question that the need for gender diversity has captured boards’ attention,” said Blair Jones, Managing Partner at Semler Brossy Consulting Group and a member of the Equilar Diversity Network Advisory Council. “The trajectory in the Equilar report is encouraging and should influence other companies to follow suit, continuing to increase the percent of women represented on their boards.”

How these trends will bear out through the rest of the year remains to be seen. But if the first quarter is any indication, there appears to be an acceleration more broadly in terms of female directorships. Stay tuned for the next Equilar GDI in August 2017, following the completion of annual meeting season.