The Mind of An Activist Investor

An interview with Paul Singer, Founder and President of Elliott Management Corporation 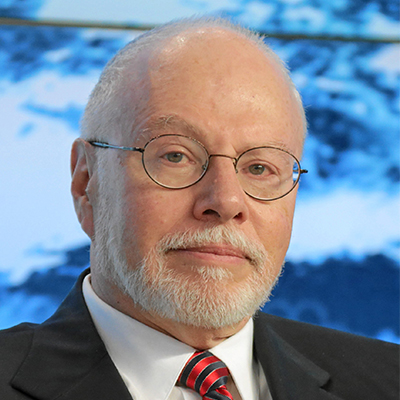 Paul Singer is the Founder, President, Co-Chief Executive Officer, and Co-Chief Investment Officer of Elliott Management Corporation. Mr. Singer is also a member of the Management, Risk, and Valuation Committees. Mr. Singer is the Founder of the Paul E. Singer Foundation and Co-Founder of Start-Up Nation Central. He is Chairman of the Manhattan Institute for Policy Research, and a member of the Board of Harvard Medical School. Mr. Singer holds a B.S. in Psychology from the University of Rochester and a J.D. from Harvard Law School.

Stock price and earnings performance are pivotal in today’s market, and when performance goals are not being met, it is likely that a corporation, of any size, will attract attention from a concerned shareholder in the form of an activist investor. More than ever, corporations must understand the best practices for navigating these encounters and what steps can produce an ideal outcome for all parties.

C-Suite sat down with Paul Singer, Founder and President of Elliott Management Corporation. Elliott manages over $38 billion in assets and is one of the oldest fund managers in the world. Singer discussed the origins of Elliott and, in particular, the rationale behind activist investing. Along the way, he suggested several best practices for companies that typically lead to a collaborative, constructive resolution.

C-Suite: Let’s start with the founding of Elliott Management. Elliott was founded in 1977 and is now one of the oldest fund managers in the world. Can you comment on your motivation behind establishing the firm and what getting it off the ground entailed?

Paul Singer: I grew up in Teaneck, New Jersey and my father, in the entrepreneurial spirit, owned a pharmacy. After attending law school, my dad told me that I needed to learn how to invest, so he and I began trading together and discovered just about every conceivable way to lose money. I had a small family partnership, and during the 1973–74 bear market, I lost nearly all the money in it.

Later, after I realized that a career as a lawyer was not for me, I decided to try to figure out how not to lose money. When I thought I had that nailed down, I formed Elliott in 1977 with a little over a million dollars from family and friends. The strategy was convertible bond hedging. It was very lowkey, low leverage or no leverage. There were real interest rates back then, so there was a real yield. The fund grew from there. As time went on, the goal never changed. The goal always was to not lose money. In the pursuit of that goal, we added strategies in the 1980s such as distressed securities and event arbitrage, fixed-income arbitrage and related-securities arbitrage. Activism fit in naturally alongside all of those strategies with the notion that helping to create value, rather than just identifying it, was a good risk-limiter.

We’ve seen a rise in shareholder engagement in recent years. From an activist perspective, what is your take on this current era of engagement?

Singer: There are several things going on. Passive investing, manifested as index or algorithmic investing, has experienced explosive growth and has met or passed active investing globally in equities. We find that there are fewer large active managers who are actually engaged in analyzing and selecting companies, and evaluating company strategies and management. At the same time, while the mix of investors has changed, shareholders of all types are united in believing in the importance of sound corporate governance.

The result of this collective effort has been that most large U.S. companies now “check the box” of good governance. We know 90% of S&P 500 boards are elected annually, boards are more independent of management than in the past and takeover defenses such as poison pills are rarely used. These trends have been very positive for shareholders. On the flip side, we are increasingly concerned about some emerging rhetoric around stakeholder primacy, and the false debate about “short-term vs. long-term” investors.

Okay, let’s talk about those trends. Aren’t companies right to be concerned about all stakeholders? Shouldn’t managers be focused on long-term performance?

Singer: I view both of these issues as essentially devoid of cognitive content—artfully crafted to appeal to investors who want to be responsible stewards of capital, but really only having the effect of pardoning poor performance by underperforming managers. Let’s take them one at a time.

First, good stakeholder relations has always been a prerequisite for good business. Managers who treat their employees, suppliers, customers or communities with contempt will not thrive. Perhaps pushing out payments to a supplier or lowering wages will help a business over one or two quarters, but investors will catch on quickly, and underlying performance will deteriorate. Likewise, corporations that disregard their shareholders’ interests will find themselves without the capital they need to operate and satisfy the needs of stakeholders.

And it needs to be said that when we’re talking about the shareholders, we’re talking about millions of people whose financial well-being depends on corporations being able to generate a rate of return for them on their savings. We’re talking about people’s pensions, their retirement plans, and the endowments that fund museums, hospitals and important charities. Every medium- to large-sized corporation has hundreds of millions of owners, and making a rate of return is a fundamental duty to all these people. And, of course, delivering for your investors is not only consistent with delivering for all other stakeholders, it is essential. A company cannot earn a sustainable rate of return without fairly serving customers, suppliers, employees and communities, and vice versa.

For boards, this trend towards a stakeholder model is actually a double-edged sword. On the one hand, boards might be tempted by the freedom to define accountability as they see fit. But in reality, this is a recipe for confusion. How can management teams reliably be held accountable for poor performance? When every stakeholder has “primacy,” none of them do. Everyone benefits from clear metrics, clear duties, and understandable practices, laws, rules and regulations.

And the “short-term” vs. “long-term” debate?

Singer: I am concerned that the conversation on corporate oversight is being increasingly hijacked by hollow rhetoric alleging that short-term behavior is coming at the expense of long-term success. Through persistent marketing by corporate defense advisors and lawyers, “short-term vs. long-term” has crowded out other important topics in our oversight debate, like an invasive species. “Short-term” is becoming broadly accepted as synonymous with irresponsible, foolish and bad, while “long-term” is a talisman said to represent all that is good, righteous and responsible.

Activists are accused of short-termism because the fixes they recommend often have an immediate impact on the stock price. But academic research has shown that, on average, these “short-term” gains do not dissipate, but rather continue to compound into long-term value. If a director, the CEO or an activist shareholder walks into a company and suggests a change in vector, and that vector is announced and is perceived by the market to have long-term value, then the securities of that company will instantly adjust. Is that short-termism? No. There are plenty of fixes that have a near-term impact on security prices but have a long-term benefit on the value of enterprises.

Isn’t there a conflict here? CEOs typically are around longer than any one hedge fund manager, and index funds, which as you say are a large part of the market, are not allowed to be sellers. Why shouldn’t they be concerned about your time horizon?

Singer: If it were true that activist shareholders were responsible for dangerous short-term behavior, it would be easy to observe and quantify. Markets with robust shareholder activism would see a dearth of profit reinvestment and a subsequent decline in innovation and growth. In these markets, investors would pay little attention to management quality, ongoing strategy and future growth prospects.

In reality, reinvestment of corporate profits in growth initiatives in the U.S. has been steady—it was 52% in 2007 and 53% in 2019. Shareholders care deeply about management quality, succession and forward-looking strategy. Growth companies, often with lower profits, have been strongly outperforming value companies for years, demonstrating that investors value companies with compelling futures.

The danger of the short-term battle cry is twofold: First, it distracts us from important and credible conversations about corporate oversight. Look at recent populist appeals against share repurchase programs, which are routinely accused of having “sucked trillions of dollars away from workers and necessary long-term investment.” This criticism and others like it gain credibility for appealing to the long term, yet they are profoundly misguided and without evidence. In the case of share repurchases, critics completely ignore offsetting equity and debt issuances, and overlook that returns made from repurchases are largely reinvested back into earlier-stage growth opportunities. Second, the acceptance of long term as a “good thing” has paved the way for underperforming managers to hide behind an undefined time horizon in order to avoid shareholder accountability. All too often, this defense is effective, and it results in prolonging poor performance.

We must reject this myopic focus on time horizons. Our discussions on corporate oversight should be focused on tangible problems and on producing policies that maximize the success of our public companies.

To this end, I believe activist investors and index investors—though investing for different time horizons—should be natural allies. Large passive firms admittedly don’t have the ability to cover the tens of thousands of companies in which they invest. However, they have all built sophisticated governance teams who understand the need to be responsive to changes in corporate strategy. It’s in their interest to be open and responsive to possible suggestions for value creation, and, to their credit, they are.

Of course, I don’t claim to speak for every activist, and when it comes to individual firms, each should be evaluated by its own track record of creating value. I have said this before—our currency is our credibility. When we come into a situation, investors see that we have rolled up our sleeves and done the deep analysis.

Singer: I believe our success rate is—and I’m defining success for this question of having an interaction that concludes with a mutually agreed-upon path forward, without any public bickering—95% or more. Our desire is the truth. What is the truth? Is this company fine, is it fixable or is it broken from top to bottom? I believe you need to sit down with activists, pick up the phone, listen, look at their ideas and tell them the truth. Have a discussion and see where you can get to.

We try to be very introspective about our thinking, our theses and our research, because if we’re wrong, we’re going to lose money and waste a lot of people’s time. The introspection that the company should have is, “Okay, regardless of the source, consider these ideas. They are ideas you either haven’t thought of or you’ve been against in the past, but what about now?” It’s a back and forth. They have power and we have power. What’s their power? Their power is to deliver the right outcome for all shareholders by engaging thoughtfully with us, adopting our ideas where we are right, or persuading us where we are wrong. In very few of these situations is either side 100% right. The key is to get to the truth through thoughtful engagement and compromise, so pick up the phone, and engage with an open mind. That’s my advice. By addressing problems and working collaboratively to create value, everybody with a stake in the company will be better off.

Issue 31: The Mind of An Activist Investor 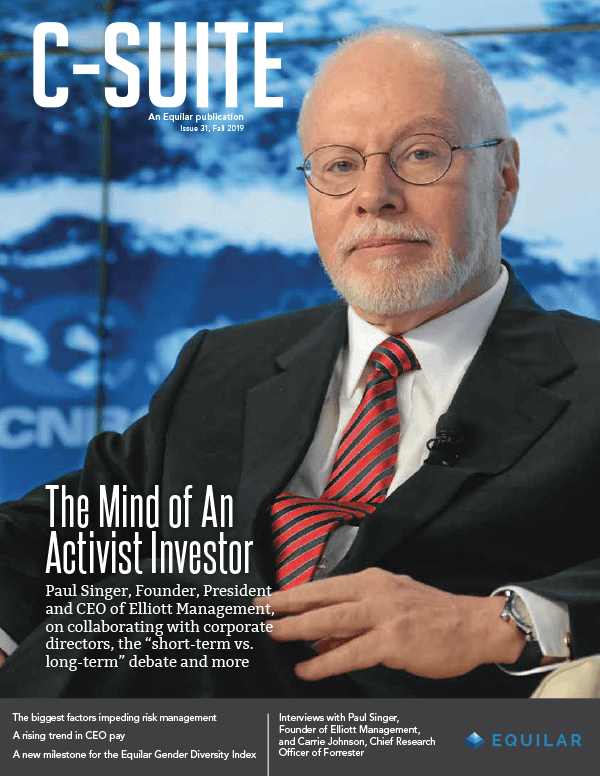 An interview with Paul Singer, Founder and President of Elliott Management Corporation

An Interview with Carrie Johnson, Chief Research Officer at Forrester