Does It Really Pay for CEOs to Perform? A Comparative Analysis 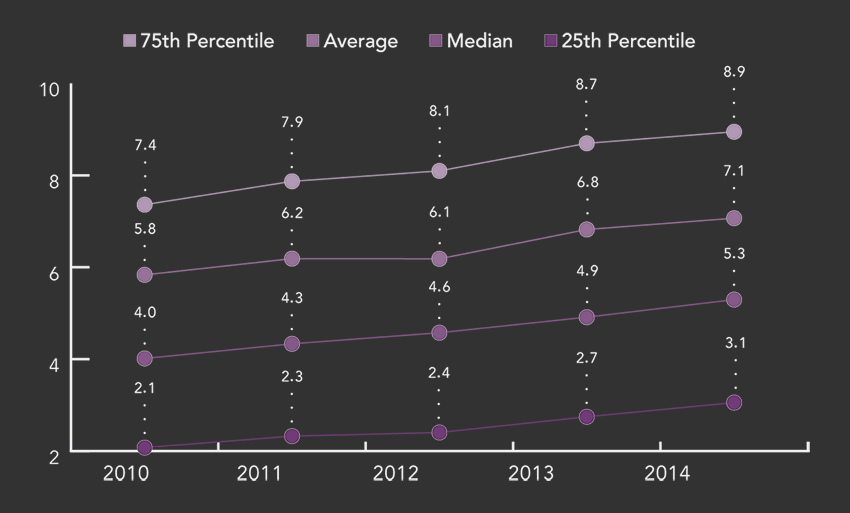 CEO pay continues to rise, reaching a median $10.3 million among S&P 500 companies in 2014, according to Equilar’s latest research. But alongside consistent growth, CEO compensation has also experienced increased scrutiny since the passing of Dodd-Frank and the advent of “Say on Pay” 5 years ago. In response to the legislation, and because stakeholders view favorably a strong link between executive pay and company performance, corporate issuers must strike a balance between incentivizing executives to meet strategic and financial goals vital to growth and long-term value creation, and creating more immediate return for shareholders.

Thus, compensation plan design affects not only the take-home pay of executives, but also company strategy and stock price. As executive compensation relies more and more on performance incentives, stakeholders are striking deals to take one step back and many steps forward. Shareholders expect that the expense or dilutive effect of compensation be returned many times over, and are willing to give a little if it means they get a lot. This increase in value, known as Total Shareholder Return (TSR), drives vital decisions in plan design, assessment, and ultimately, shareholder investment decisions.

In theory, shareholders grant a larger piece of the collective pie to attract, retain, and reward executive talent, so long as the pie’s growth outpaces that of the executive’s slice. To test this theory, we compared fiscal year 2014 TSR between two groups of 67 companies within the S&P 500 with similar revenues and market cap – one group represented the 80th to 95th percentiles of this set of S&P 500 companies, which collectively paid their CEOs a relatively high amount as a percentage of company revenue. The other represented the 5th to 20th percentiles, paying a relatively low amount. We removed the top and bottom 5% to account for outliers.

As shown in the chart below, companies in the subset that paid their CEOs a higher percentage of revenue realized a 22% TSR at the median, compared to 9.7% for the group who was paid as a lower percentage of revenue. Using average revenue and market cap from the sample pool of companies, the premium paid to CEOs in the first group would represent 1.3% of the difference realized by their shareholders over and above shareholders of the latter group. Based on these simple measures, it appears these executives were indeed paid to perform. 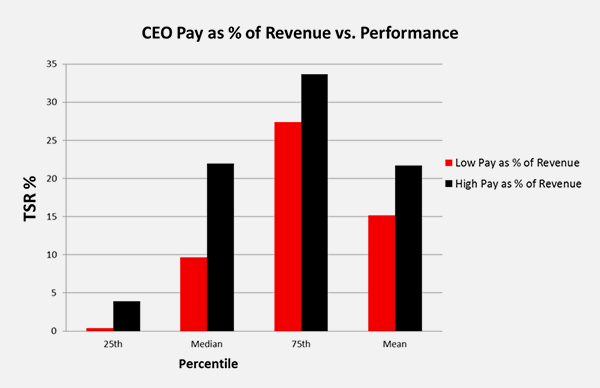