In the past five years, CEOs transitions have become more common than they had been in the preceding five years. As a result, median tenure has fallen a full year since 2013.

According to a recent Equilar study, the median tenure for CEOs at large-cap companies* was 5.0 years at the end of 2017. Looking back historically at the companies included in the study, that figure has fallen from 6.0 since 2013. Average tenure, which is weighted by long-standing CEOs with several decades of service, also dropped in that timeframe, but to a lesser degree—decreasing from 7.5 in 2013 to 7.2 in 2017. 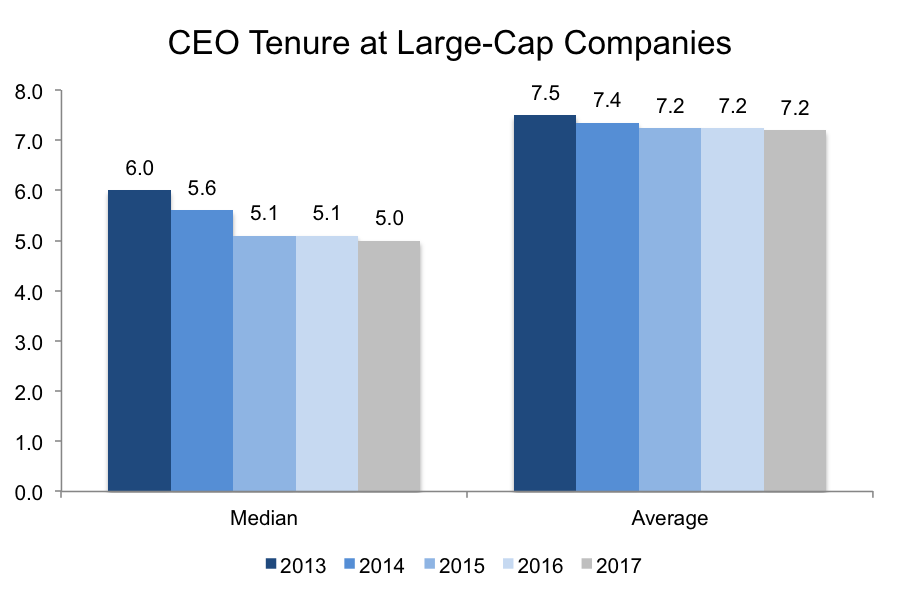 There are a number of CEOs in the study who have served more than 20 years—32 to be exact—and about 100 more who have served between 10 and 20. However, a plurality of large-cap CEOs have been in the corner office between one and five years. Of all CEOs who were serving at the end of 2017, 38.1%—or 192 executives—had been in their current position for a handful of years or fewer. The breakdown is shown below in both total number and percentage of the whole. 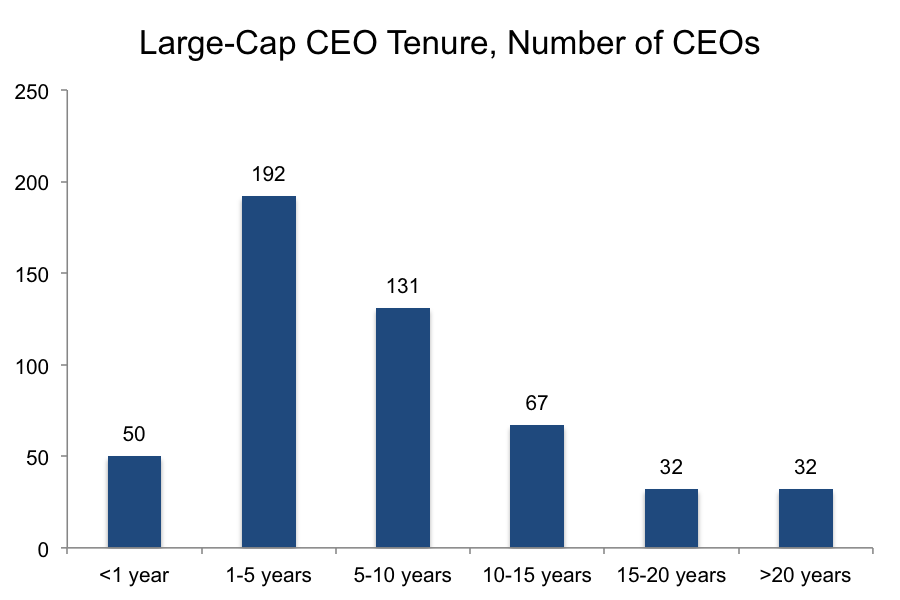 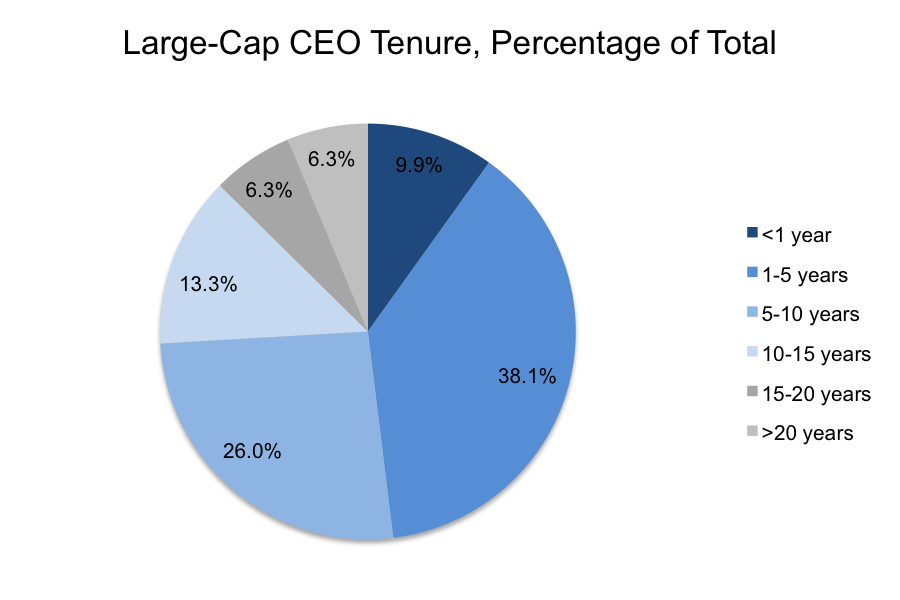 2016 was an outlier year for CEO turnover, with 73 executives leaving their posts, according to Equilar data. Yet, in each year since 2013, at least 50 top executives have left their positions. A majority of these departures were classified as “resignations,” even though they came under a variety of circumstances. For example, in 2017, 33 of the 52 CEOs who left their roles officially “resigned,” according to their 8-K filings. Rarely are executives officially “terminated,” even if they leave under duress following scandals, as we’ve seen in cases such as Equifax and Wells Fargo. 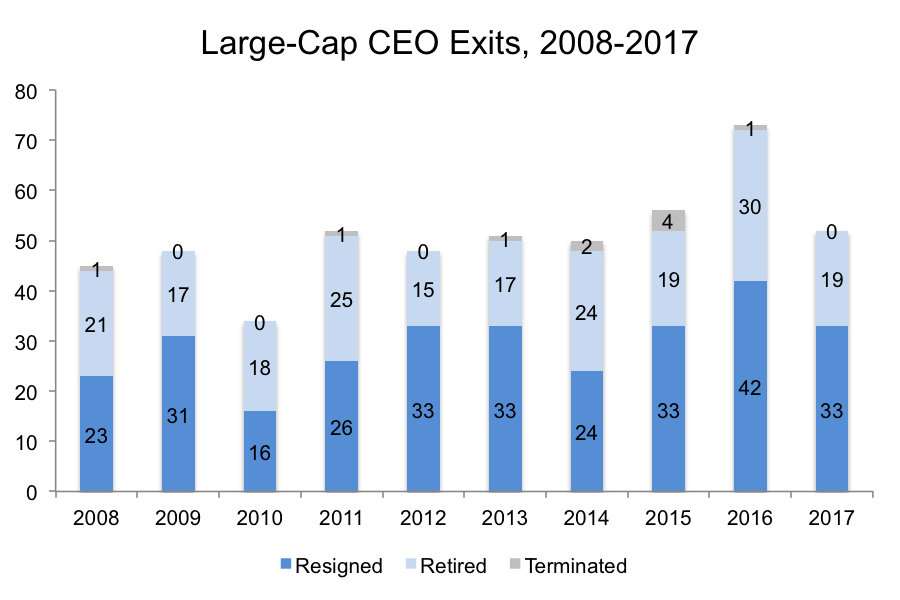 A greater number of executive positions available means a greater number of opportunities to increase diversity in leadership, which lags furthest for CEO positions. According to the Equilar study, just 5.6% of CEOs at large-cap companies were women as of December 31, 2017. By comparison, about 22% of seats on boards of directors at these companies were held by women at this time.

Despite the fact that 282 CEO spots have changed hands in the past five years, the prevalence of women in those roles has only increased by 1.9 percentage points (or a net gain of nine women CEOs). One criticism of board recruiting tactics is that the insular nature of board networks leads to a preference to look only for directors who have already been on other boards. Since a vast majority of board members are men, this practice would lead to a cyclical trend of adding more of the same directors.

In the case of the CEO recruiting, the lack of women in top positions points to a pipeline problem. A separate Equilar study from mid-2017 found that a majority of CEO hires come from the inside (79.1% of those included in the sample). If succession plans throughout the organization are more deliberately focused on elevating executives from more diverse backgrounds, leadership then should naturally become more diverse based on current hiring/promotion practices. 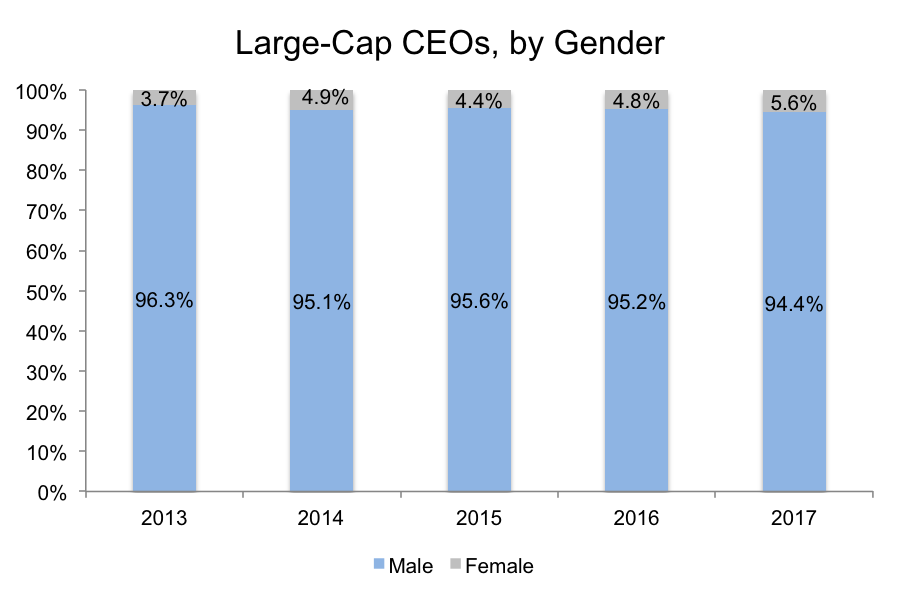 *The list of companies identified for the study may be found here.