Gender Parity in the Boardroom Still Decades Away

The number of women on boards continues to rise, but it will be a long time before female representation at the largest U.S. companies matches their representation in the workforce, according to a new report. from the Government Accountability Office (GAO). The report found that even if a woman filled every newly opened board seat, it would take until 2024 before reaching equal representation with men.

Women account for almost half of U.S. professional workers, yet occupy just 15.5% of director seats at S&P 1500 companies, according to the study. Equilar found. that the largest U.S. companies are slightly more diverse, and 19.8% of all directors on S&P 500 boards are female.

According to the GAO report, progress is underway, and the number of female directors has nearly doubled since 2007. In addition, women were elected to 22.8% of open board seats among S&P 1500 companies in 2014.

The GAO estimated that at the current rate it would take approximately 10 years for females to reach 30% representation on boards at S&P 1500 companies, and 40 years to reach equal parity with men. This estimate is optimistic in one sense, since it assumes that females will occupy new board seats at the same rate as men—currently it is about half that rate. At the same time, the projection also assumes 600 new open board seats per year. With a continued focus on board assessment and refreshment from investors and companies alike, not to mention a focus on aging board director population, that number could continue to rise, thus opening more opportunities for females to gain board seats.

In Europe, quotas and other government mandates have helped increase the number of women on boards. In Norway, 35.5% of directors were women in 2014, according to Catalyst data. In Finland, France and Sweden, those figures approached 30%.

There is little movement toward any regulatory process in the U.S., and stakeholders GAO interviewed generally preferred voluntary strategies for increasing gender diversity on corporate boards. More than 75% of those investors surveyed want to improve SEC requirements for transparency around board diversity—particularly around gender, race, and ethnicity—suggesting that without this information, some shareholders may not have fully accurate picture of the companies in which they invest.

Though the GAO report did not make official recommendations, it does outline several scenarios hindering the consideration, nomination and election of females to boards and offered the following potential solutions:

Companies are not ignoring this issue, and indeed many are already employing these strategies. and are openly transparent in their public filings about these efforts.

But change on a large scale takes time, and there’s still a long way to go. In addition to the challenge of gaining seats on the board, women are underrepresented in leadership positions as well—including but not limited to chair, lead director or presiding director. Equilar found that females occupy just 6.8% of such positions in the S&P 500—holding just 54—while males occupy the other 739 board leadership roles, or 93.2%. 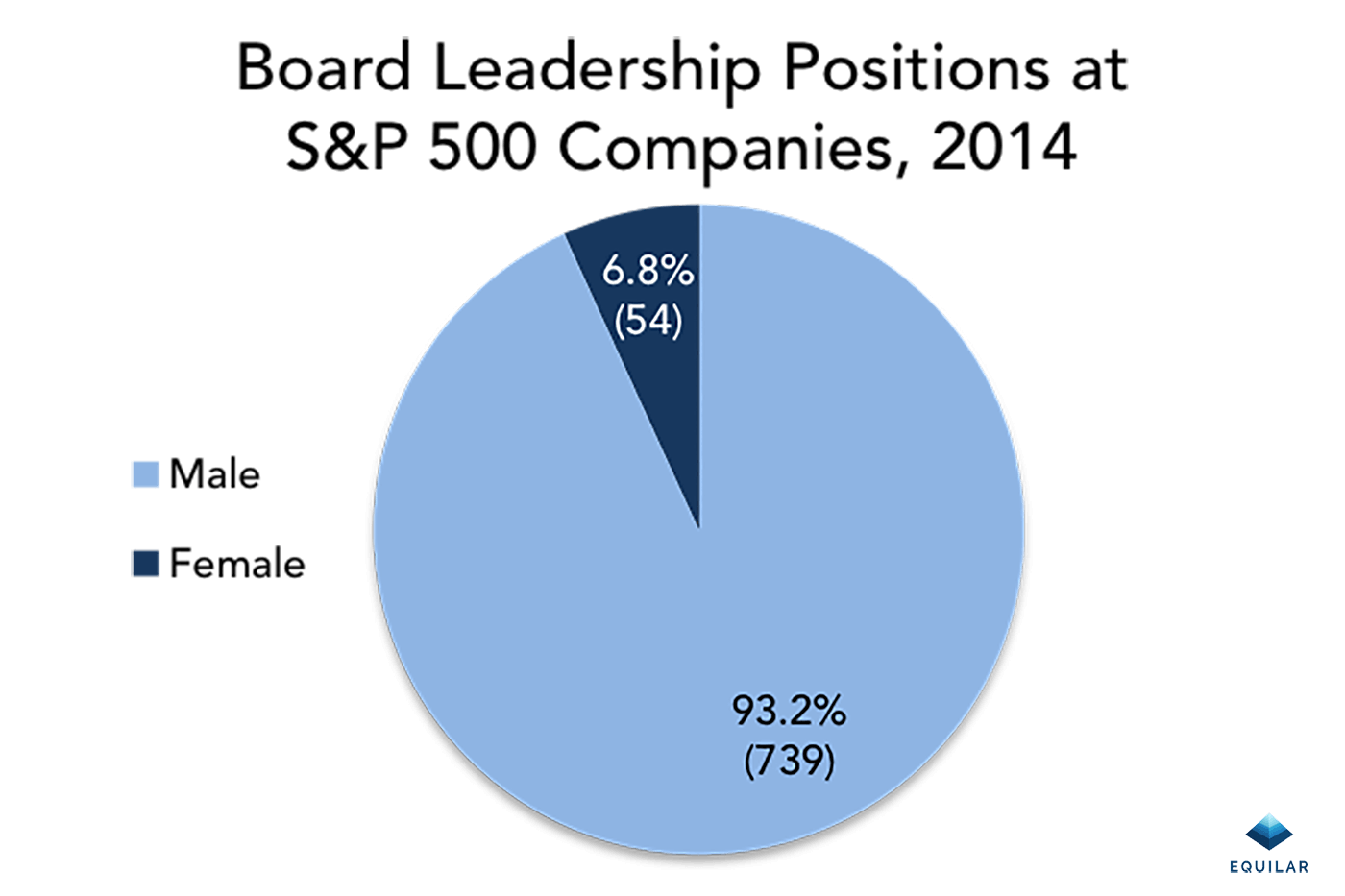 Equilar’s latest report on gender diversity in the S&P 500 includes stats analyzing the representation of women on boards in various industries and on board committees. For a look at the global landscape and the efforts by investors to influence increasing gender diversity, watch the replay of our November 2015 webinar.

To aid and assist companies with board assessment and refreshment, Equilar’s BoardEdge features detailed information on more than 135,000 U.S. board members. BoardEdge not only includes more than a dozen categories about each board member’s background and leadership experience, but also features a network tool clearly displaying how board members are connected to each other.