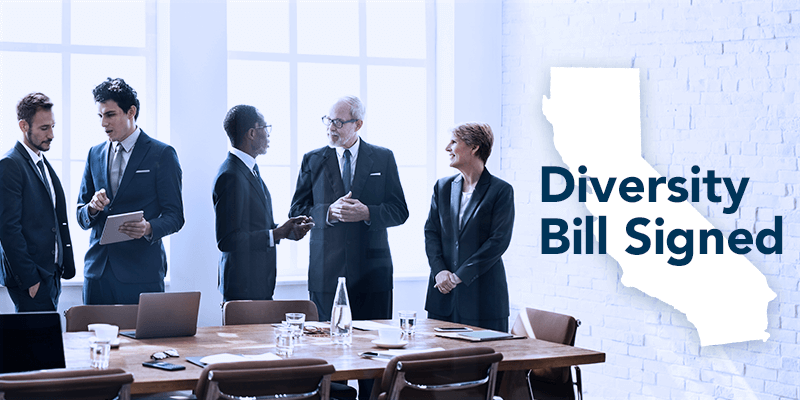 On Wednesday, California Governor Gavin Newsom signed a monumental bill that will require publicly traded companies headquartered in the state to have at least one board member from an under-represented community by the end of 2021, The Wall Street Journal reported. The news comes during a period of civil unrest centered around racial injustice across the nation, sparked by the death of George Floyd this summer.

Given the current social landscape and public dialogue around equality, the push for more racial diversity on boards has picked up steam in recent months. Proponents of the California legislation advocate that this form of action will shake up the composition of corporate boardrooms across the state, leading to more diverse perspectives that align with current societal demographics. However, California boards appear to have their work cut out for them. According to an Equilar analysis featured in The Journal’s report, *36.1% of Russell 3000 boards headquartered in California would not meet the 2021 requirement as of August 31 of this year. Currently, there are more than 500 public companies based in California in the Russell 3000 index.

“It is clear we can no longer wait for corporations to figure it out on their own,” said California Assemblywoman Cristina Garcia, a Democrat and author of the bill, along with Chris Holden, David Chiu and principal co-author Eloise Gomez Reyes.

“Social movements have always been a driving force behind making progressive policies a reality,” added Mr. Holden, who introduced the bill in July.

The signed bill, which would go into effect in January 2021, also mandates boards with more than four members include two people from under-represented communities by the end of 2022. Boards with nine or more directors would need a minimum of three by the end of 2022. The Equilar analysis revealed that a whopping 82.5% of companies that fall under these categories would not meet the 2022 requirement. Individuals who identify as Black, African-American, Hispanic, Latino, Asian, Pacific Islander, Native American, Native Hawaiian or Alaska Native, or who identify as gay, lesbian, bisexual or transgender, would be considered eligible for meeting the requirement.

In 2018 California made history becoming the first state in the nation to pass a gender quota for public boards headquartered in the state. When that legislation passed, 17% of Russell 3000 board seats in California belonged to women, ranking the state 29th in the U.S. Women represented 24% of those seats as of early this year, and California ranked 17th in female board representation, showcasing the significant impact legislation can have on boardroom processes.

According to the Equilar analysis of California’s current board composition, roughly 13% of all board seats in the state of California are occupied by people of color. Of those diverse directors, 7.9% were identified as Asian/Pacific Islander, 2.5% as Black/African American, 1.9% as Hispanic/LatinX, and 0.9% as Middle Eastern/North African. Among boards in California that would meet the requirements of the signed bill, PCB Bancorp is the most diverse board in the state with all eight of its board members being from a member of an under-represented community. The firm is followed by Cathay General Bancorp and Entravision Entertainment, which is composed of 92% and 86% ethnically-diverse board members, respectively.

While the signed bill certainly has its advocates, it is expected to also ruffle the feathers of several companies that will not like to be told how to conduct their board succession planning. Additionally, the news could also raise constitutional concerns.

Joseph Grundfest, a Stanford University law professor and former commissioner of the Securities and Exchange Commission, told the Journal that while he favors increased racial and gender diversity in corporate boardrooms, “it’s impossible to ignore the constitutional issues raised by any legislation that uses race or gender as a basis for a quota.”

The news could also lead to further discourse around diversity not just at the executive and corporate levels, but at the company-wide level.

“Then, there is the classic slippery slope question,” Grundfest added. “If California can constitutionally mandate the racial and gender composition of corporate boards, then why can’t it do the same for the entire corporate workforce?”

Nevertheless, Governor Newsom’s signing of the bill will certainly be a moment to remember in California history. While it’s too early to tell what the long-term impacts of the legislation may be, there is no question it could set the path for greater diversity on boards.

*Data is reflective of ethnicity data only, as Equilar currently does not track LGBTQ data.

Equilar recently launched an ethnicity data campaign through its Equilar Diversity Network (EDN), a consortium focused on advancing diverse representation in boardrooms. Equilar and EDN partners launched this initiative as a means to build the largest database of ethnically diverse executive and board candidates to make it easier for companies to connect with top minority candidates. Learn more: www.equilar.com/press-releases/123-EDN-launches-ethinicity-data-campaign.html