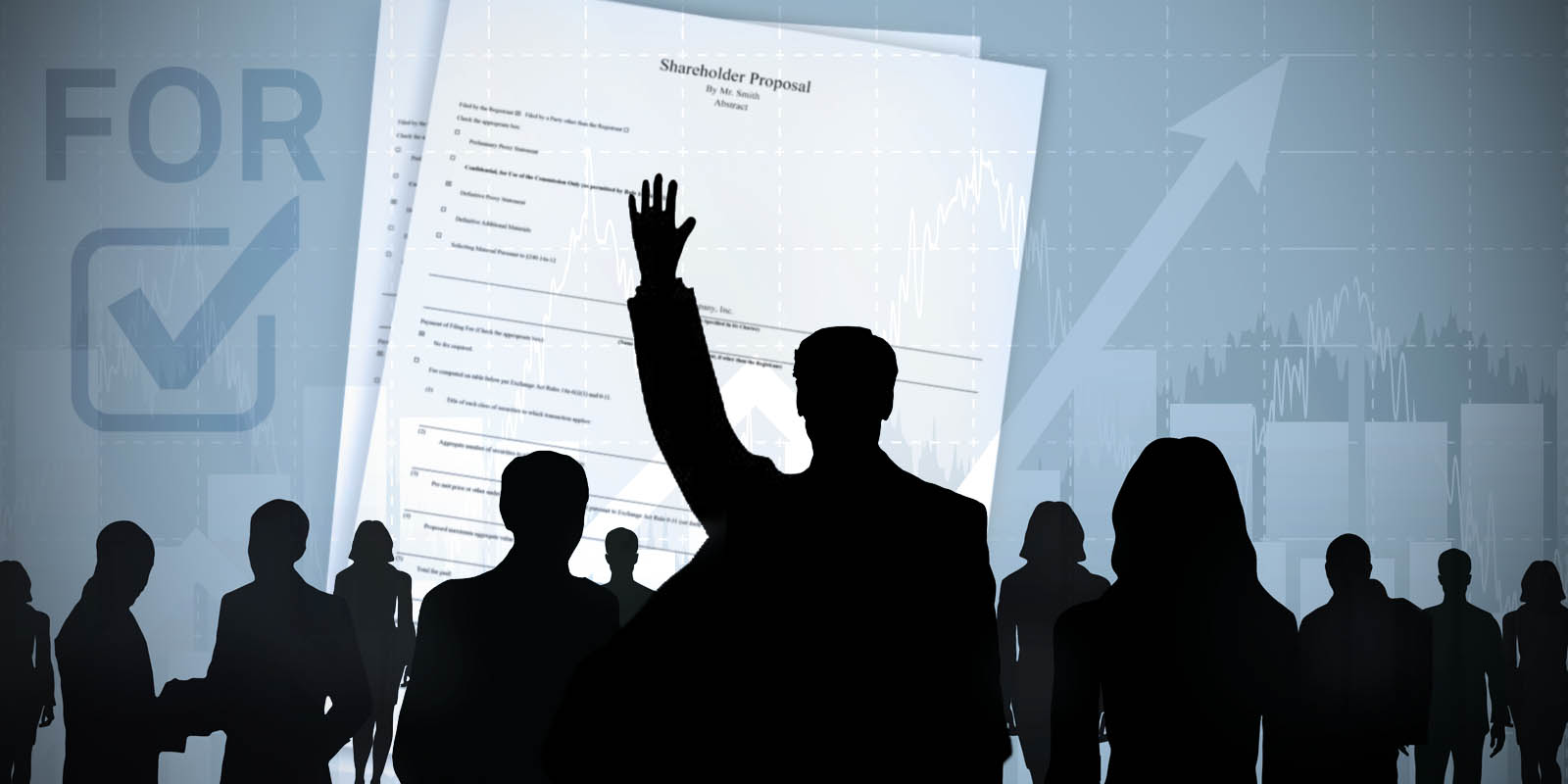 Environmental, social and governance (ESG) proposals voice shareholder concerns about topics including, but not limited to, climate change disclosure, lobbying and political campaign contributions, gender pay equity and employment diversity. According to a recent Equilar study, at least 200 ESG shareholder proposals were voted on each year from 2015 to 2017, combining for a total of 633 shareholder proposals.

One might imagine that if shareholders urged companies to provide more information addressing ESG issues, companies would be more apt to do so. However, the numbers tell a different story. In fact, over the past three years, ESG proposals have received a median approval rating of 20.8% with only 2.5% of all proposals receiving enough votes to pass. While these numbers do not look promising, a deeper dive into more recent data seems to suggest a rather positive outlook regarding two important ESG issues.

With board diversity at the forefront of governance issues, it is important for companies to demonstrate that they are making a concerted effort to foster the inclusion of women and underrepresented minorities on executive teams and in the boardroom. As Russell 3000 boards crawl towards gender parity, shareholder concerns regarding these two matters are continually increasing in prevalence and importance. Shareholder proposals dealing with gender and diversity are defined as proposals that request companies to disclose measures taken to create greater diversity on the board or in the workplace, prepare a report with a comprehensive breakdown of its workforce by race and gender, or provide information regarding the policies and goals of the company to reduce and address the gender pay gap. Figure 1 below demonstrates a trend upwards, as the number of these proposals voted on by investors topped out at 24 proposals in 2017, yet there has been at least ten proposed over the past three years. The prevalence of these proposals, despite only representing about 6% of all ESG proposals over the past three years, is hard to ignore. 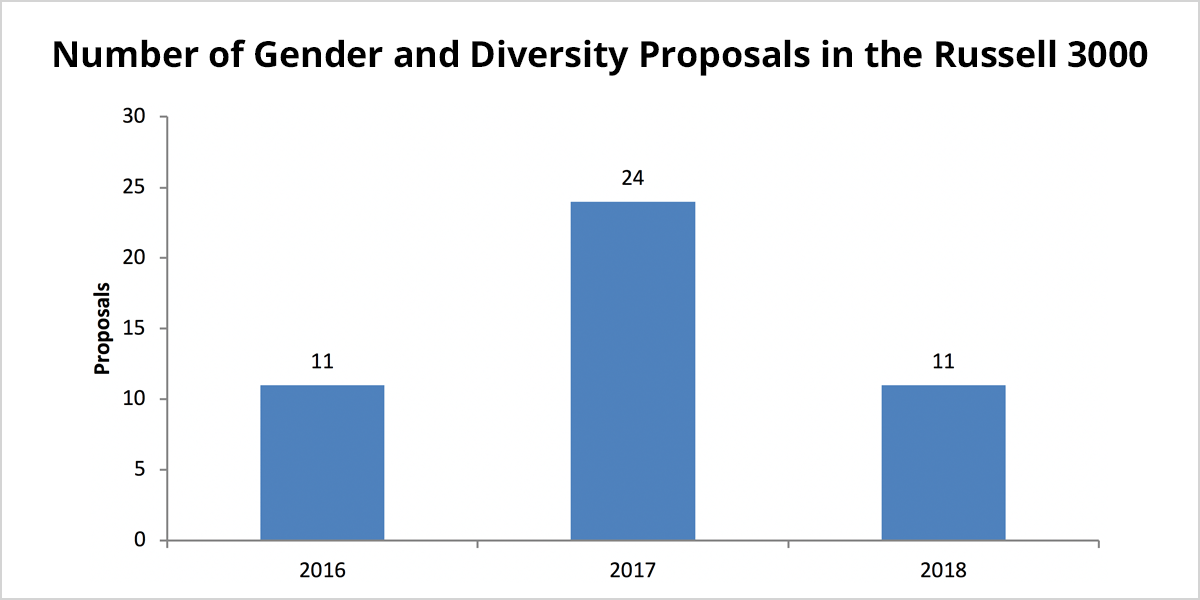 During this same time period, the median support for such proposals increased by one percentage point overall, though median support increased by 24.8% from 2017 to 2018. While only two of these proposals have received a majority and passed, both dealt with diversity. These two proposals requested that the firm release a report regarding the steps it “is taking to foster greater diversity on the Board.” The fact that such a small number of these proposals passed suggests that, by and large, companies believe that their current efforts and policies regarding diversity are more than enough and don’t require the additional disclosure that shareholders are requesting. 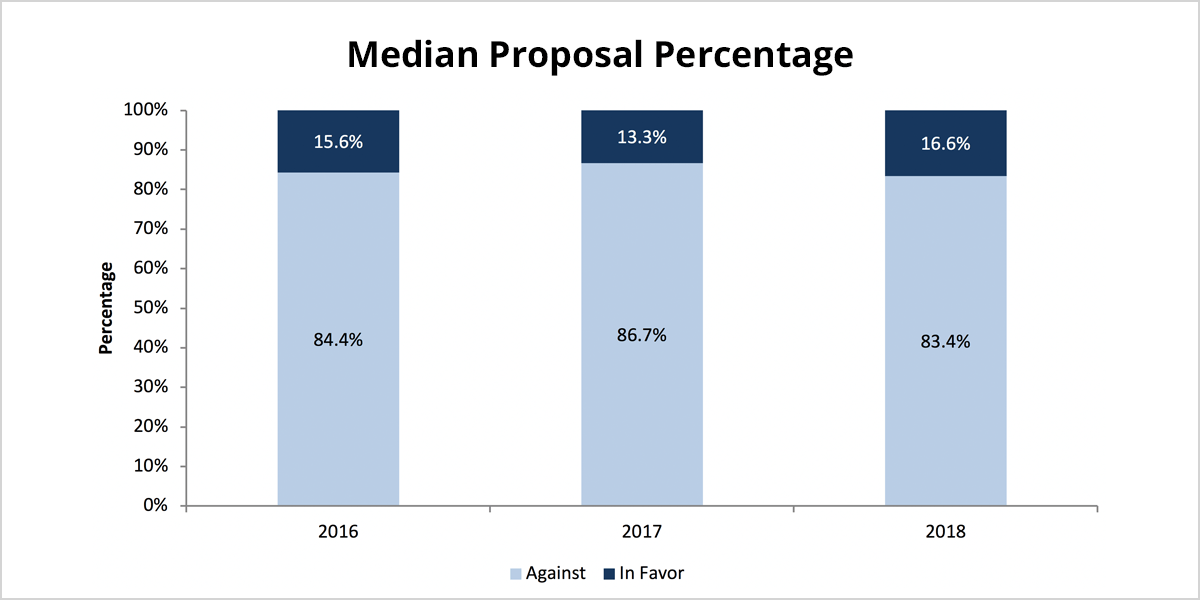 Historically, the onus has been on companies to only mitigate and reduce exposure to financial risk; yet, recent years prove that it is also important to be able to successfully navigate non-financial risk and protect shareholder value. It will be interesting to see whether these trends and support for diversity proposals will continue. Continued growth in prevalence for such proposals will hopefully lead boards and executive teams across the Russell 3000 to simultaneously examine current practices and policies regarding diversity and gender pay equity and justify to shareholders that they are properly addressing these concerns. As long as activism continues to rise, shareholder engagement regarding ESG issues will become more important than ever for companies to address and understand. A continued, open dialogue with shareholders can only benefit both parties, as all sides continue to move towards an agreement regarding these issues. 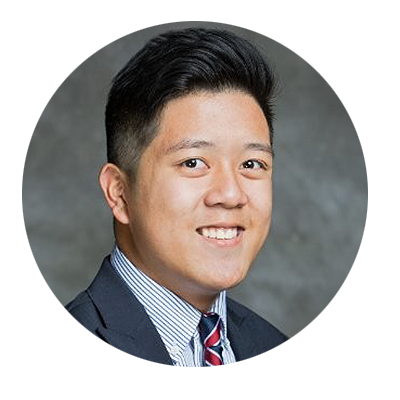