Why Do Some Companies Defend a Failed Say on Pay Vote? 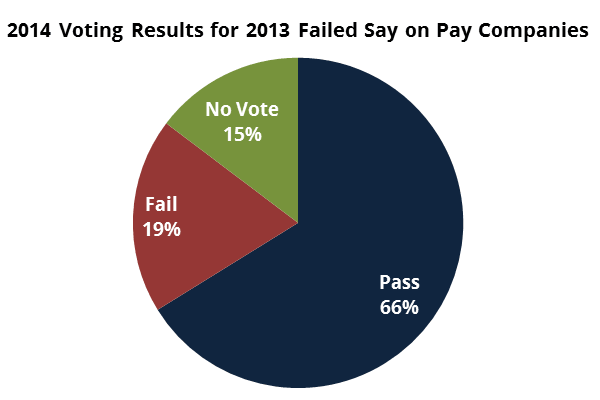 The years since the passage of the Dodd-Frank Wall Street Reform and Consumer Protection Act have seen increasing attempts to link executive pay with performance. One requirement of the bill is that companies hold regular shareholder votes on executive compensation packages. This offers a fascinating glimpse into internal battles to determine appropriate pay levels and incentive plan structures. In our Impact of Say on Pay: Analyzing Changes Following a Failed 2013 Vote article, we discussed changes companies made to compensation plans in response to a failed Say on Pay vote at their 2013 shareholders’ meetings and how those changes affected shareholder votes the next year. Most companies adjusted their pay policies, but 18 did not.

Two of those 18 companies defended their compensation package as appropriate but underwent organizational changes during the subsequent year that had a considerable impact on how executives were paid. One company dissolved and distributed assets to shareholders, while the other restructured into an externally managed REIT. Perhaps due to these significant changes, these two companies witnessed the largest improvements in Say on Pay results of the 18.

Most companies, however, had to defend the status quo. Some expressed the opinion that inadequate diclosure was the true culprit and resolved to describe their practices more clearly and transparently. Others pointed to changes made in prior years, or to how their plans aligned with accepted best practices.

Shareholder Returns and Say on Pay

One notable explanation given by several companies for a failed Say on Pay vote was that the negative result was a product of shareholder discontent with financial performance rather than disapproval of compensation policies. In fact, several companies that ultimately did make changes also made this claim. The data, though, does not support the idea that shareholders vote based on financial performance. We found no correlation between subsequent shareholder return and improvements in Say on Pay results for these companies. While it is certainly possible that some shareholders have utilized Say on Pay votes in this way in isolated incidences, there is no evidence that it broadly affects decision-making.

Whatever the reason given, declining to make adjustments to compensation practices in the aftermath of a failed Say on Pay vote was associated with little increase in shareholder approval. The 18 companies that made no changes saw a median improvement of only 16 percentage points, compared to the 45 percentage point median increase experienced by the companies that did make changes. In this charged area of executive pay, being responsive to shareholders can go a long way. For more information on the world of executive compensation, please visit our Knowledge Center.