Gender diversity on Russell 3000 boards has continued to progress each quarter for almost three years, according to the latest Equilar Gender Diversity Index (GDI). During the second quarter of 2020, the percentage of Russell 3000 board members who are women increased from 22% to 22.9%, pushing the GDI to 0.46, where 1.0 represents parity amongst men and women. 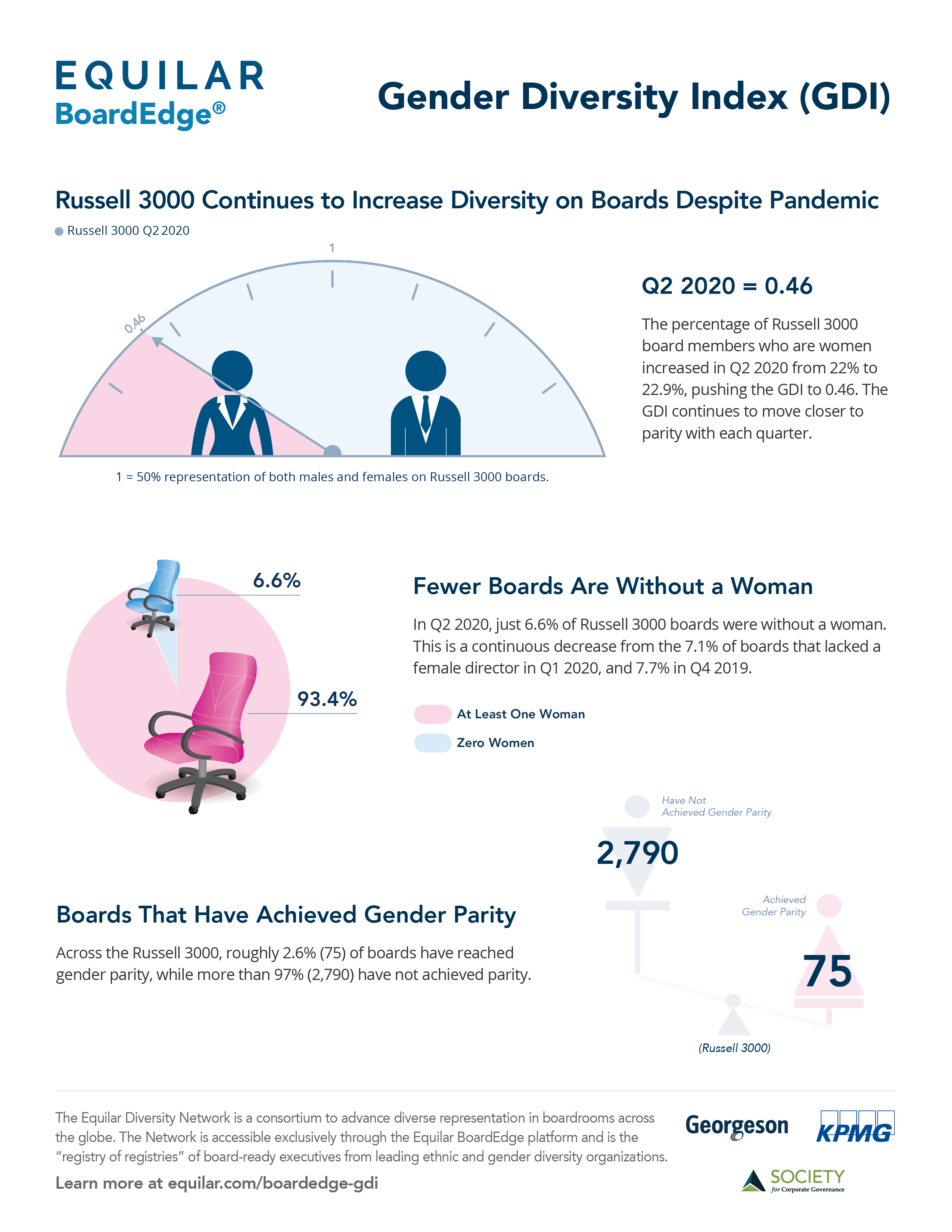 There is no question that Corporate America as a whole is making a concerted effort to push for greater diversity across organizations. The results from the latest GDI further emphasize this trend. In Q2 2020, the percentage of Russell 3000 boards without a woman declined to 6.6%—steady decrease from 7.1% during the first quarter of the year.

Of course as is the case with any initiative, the campaign for more gender-diverse boards faces some obstacles, despite progress. For instance, while companies are adding more women to their boards with each passing quarter, the pace in which women are added to boards is relatively slow.

“If I had to choose one obstacle women face in reaching the boardroom, it would be the small number of available board seats and the slow rate of turnover in many boardrooms,” said Susan Angele, Senior Advisor, Board Governance at The KPMG Board Leadership Center. “Until turnover—based on skills, contribution and relevance to strategy—becomes destigmatized and routine, the pace of change will continue to be painfully slow.”

One of the reasons progress is moving slowly may be due to the fact that women, in general, have had less experience at the board or executive level. “Many positions are routinely filled with men because they are more likely to have had more opportunities to gain relevant experience,” said Brigid Rosati, Director of Business Development at Georgeson. “Companies can organically grow a larger pool of skilled, potential board candidates by identifying and cultivating women with professional potential at every level of the organization.”

While gender diversity will certainly continue to be a hot-button topic across boardrooms, corporations are beginning to pay close attention to diversity in the form of ethnicity. The nation is in the midst of a social movement focused on ending racial inequality.

Sparked by the tragic passing of George Floyd in May, racial inequities have come under tremendous scrutiny in recent months. The civil unrest has trickled into corporate boardrooms as well. In California, a bill was recently passed that would mandate all publicly-traded companies headquartered in the state to have at least one director from a minority community by the close of 2021. Governor Gavin Newsom has until the end of September to sign or veto the bill.

In California, there are more than 500 public companies within the Russell 3000. If signed into law, the bill would have a significant impact on the representation of minorities in corporate boardrooms.

“There is no question but that the renewed focus on race and ethnic equity in society is adding to the conversation about diversity in the boardroom,” said Angele. “Whether a mandate such as the California bill, accelerated investor engagement, or a disclosure initiative such as the recent Illinois law and the federal bill passed by the House of Representatives—momentum for diversity, broadly defined to include race, ethnicity and in some instances sexual orientation, is continuing to build.”

California was also the first state in the nation to implement gender quotas on boards. When SB-826 was signed in the state in 2018, women held just 17% of all Russell 3000 board seats in California, ranking the state 29th in the nation with respect to prevalence of female representation on boards. Fast forward to Q2 2020, and women now represent 25% of all board seats in the state, ranking California 16th in the nation. There is no question that legislation is crucial in advancing diversity movements, and if the current California bill is signed, it is sure to have an impact of greater minority representation.

Additionally, the increased level of focus from the investor community will certainly continue in coming years. “Investor voting policies, which have called for greater director disclosure and higher levels of diversity on the board, have significantly impacted how companies assess director election vulnerabilities,” explained Rosati. “The evolving focus on board diversity from institutional investors may continue to drive change, resulting in more women added to boards.”

As we continue into the latter half of 2020, the landscape will continue to evolve and companies will look to adapt. Nonetheless, while progress may be slow, women are indeed inching closer to parity on Russell 3000 boards.