For the eighth consecutive quarter, the Equilar Gender Diversity Index (GDI) has increased. With the percentage of women on the boards of Russell 3000 companies increasing from 20.2% in Q2 2019 to 20.9% in Q3 2019, the GDI is now 0.42 where 1.0 represents parity amongst men and women on corporate boards across the Russell 3000. The upward trend has pushed the GDI to its highest point since inception. 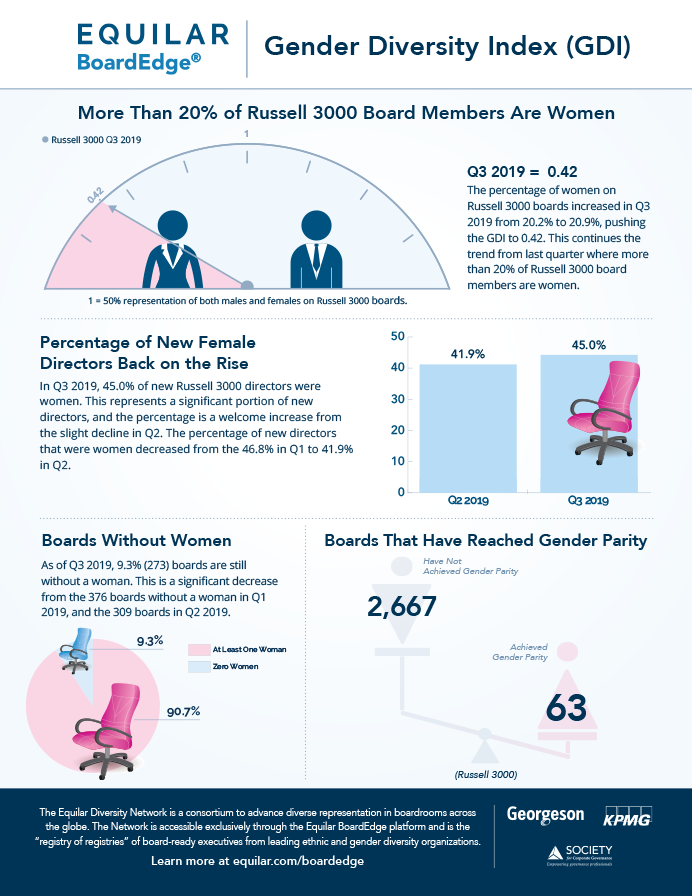 As featured in The Wall Street Journal, the previous quarter’s GDI revealed that women occupied 20.2% of board positions across Russell 3000 companies at the close of Q2 2019. This was the first time that women held more than 20% of Russell 3000 board seats.

2019 has seen significant growth, and accordingly progress, for women on corporate boards. While Q2 2019 saw the first instance of the percentage of women on Russell 3000 boards exceeding 20%, Q3 has further pushed this statistic to 20.9%. With almost 21% of Russell 3000 board seats belonging to women, 63 boards have reached gender parity. When Equilar began tracking the GDI in January 2017, only 15% of board seats in the Russell 3000 were held by women and less than 25% of board vacancies were being filled by women.

Of course, progress on this front may be contributed to a variety of reasons. For one, boardroom diversity continues to be among the most pressing investor concerns. According to a 2019 report from the EY Center for Board Matters, 53% of institutional investors say diversity should be a top issue for boards.

“Investors are interested in understanding diversity practices beyond the boardroom and looking closely at how companies are proactively addressing diversity in their employee base,” said Brigid Rosati, Director of Business Development at Georgeson.

Susan Angele, Senior Advisor at KPMG’s Board Leadership Center, added “Boards should keep in mind that the level of scrutiny continues to increase among stakeholders, including employees and customers as well as investors and regulators. Investors are increasingly engaging with companies regarding the factors that drive board composition and healthy turnover.”

It appears that the conversation around diversity is becoming more the norm, rather than a “check-the-box” exercise. “The more that diversity becomes less a special request and the more it is simply part of the routine for every search, the more progress there will be,” said Angele. “And of course it goes without saying that no one should be placed on a board—female or male—unless they are qualified and have the knowledge and business acumen to add value.”

Although progress is being made, reaching gender parity across the Russell 3000 is still a long way away. Only 63 companies out of the Russell 3000 have at least 50% women on their boards. Efforts to aid in the push for gender diversity across corporate America have hit some obstacles. In California, the recent law mandating the placement of women on boards already has a lawsuit against it. Inclusion initiatives may also cause negative reactions from shareholders.

Regardless, as we enter 2020, the Q3 GDI results are an encouraging sign for diversity in the boardroom. As corporate America prepares for the top governance issues of the next year, boardroom diversity will certainly be among the highest of priority.

“[The GDI data] shows that many companies have now reached a gender diversity threshold that is compliant with the current demands of investors,” said Rosati. “However, as we enter a new decade, we believe investors will begin to put more pressure on companies to work towards greater gender parity, and perhaps we will see more companies with over 50% women on their board over the next 10 years.”

The Equilar GDI is powered by Equilar BoardEdge, a database of more than 500,000 public company board members and executives. BoardEdge includes exclusive features that show how board members and companies are connected to each other, as well as the Equilar Diversity Network (EDN), a “registry of registries” of board-ready executives from leading ethnic and gender diversity partnerships, organizations, and publications.