As the top financial expert of a corporation, chief financial officers (CFOs) can expect to handle and maintain the millions of dollars that move through an organization. As a result, CFOs should be compensated in accord with their high profile, fast-paced executive position. Companies must aim to craft a compensation package that matches the caliber of a CFOs work as a means to attract and retain top talent. At the same time, companies must ensure that pay incentivizes and motivates executives towards results.

As featured in the Wall Street Journal, this Equilar study examined CFO pay across the Equilar 500—a subset of the largest U.S. public companies by revenue—from 2010-2019. Over the last 10 years, CFOs have not seen a substantial change in compensation, or how they are compensated. Although pay is increasing overall, the pay components discussed in this study could serve as indicators on what trends to expect in CFO pay over the next few years.

Total compensation for CFOs has steadily risen over the last 10 years. Overall, median, 25th percentile, and 75th percentile CFO pay has gradually increased. While there was a slight decrease for the 75th percentile between 2012 and 2013, a sharper increase from 2013 and 2015 continued the upward trend for pay. Median CFO pay has steadily risen since 2010, with noticeable increases of $0.4 million and $0.3 million in 2011 and 2018, respectively. The 25th percentile has seen a slight decline in growth in recent years, with a minor decrease in pay between 2018 and 2019. 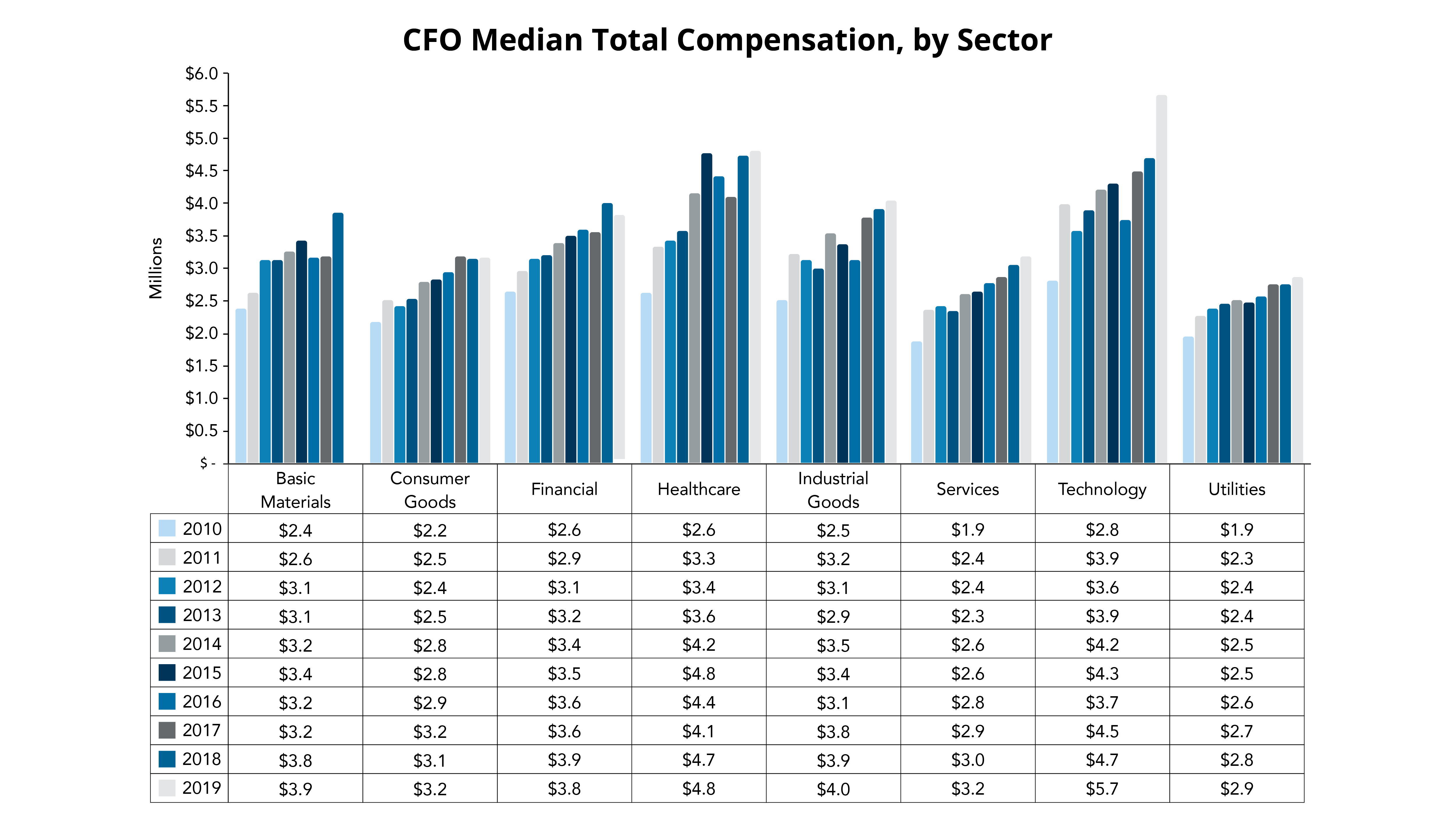 In terms of industry, the three most highly-compensated sectors in 2019 were technology, healthcare and industrial goods. The technology sector saw the largest increase in CFO pay, with a spike in median compensation from 2018 to 2019 of almost $1 million. Technology has also consistently been the sector with the highest CFO pay from 2010 to 2019. Although industrial goods had the third-highest median compensation, the basic materials and financial sectors were close behind, at $3.9 million and $3.8 million, respectively. On the other hand, the utilities sector has consistently had the lowest median CFO pay since 2010, coming in at a median pay of $2.9 million in 2019. However, across all sectors it is evident that there is a general upward trend in CFO pay. Therefore, a rise in CFO pay for the next fiscal year can be expected.

The average pay mix for CFOs has remained generally consistent from 2010 to 2019. However, there is a noticeable decline in base salary. While base salary accounted for 19.1% of CFO pay in 2010, in 2019, it only accounts for 14.0%, a 5% decline. There is also a notable increase in the proportion of stock awards, a 15% increase over the ten-year period. This may suggest that, similar to CEO pay trends, CFOs compensation may be moving more towards performance-based pay. By achieving goals and hitting key metrics, CFOs may be more incentivized to perform with pay dependent on results, rather than a larger base salary. Furthermore, bonuses have declined by 1.5% of an already small percentage, which may be further indication of a pay for performance model.

CFOs moving towards a pay for performance compensation model is further evidenced by the average cash versus average equity pay components. From 2010 to 2019, there has been a noticeable increase in the percentage that equity accounts for CFO pay. By placing a heavier emphasis on equity for CFO compensation, executives are incentivized to meet and exceed performance goals. This is mutually beneficial for the C-suite and shareholders alike, and therefore, this trend is likely to continue.

In terms of the gender breakdown, the prevalence of women in the CFO role has increased. Since 2010, the percentage of women as CFOs has risen from 8.4% to 13.6%. Although growth has been relatively slow, with a 1% dip between 2016 and 2017, 2019 alone has seen the highest percentage of female CFOs to date.

Furthermore, as more women have taken on the position of CFO, their pay has increased. While male CFOs have had a general upward trend in compensation since 2010, female CFOs have experienced a less than linear trend. Although there was a rise in pay for female CFOs from 2010 to 2011, from 2011 to 2013 there was a clear decline. A slow rise from 2013 to 2015 returned pay to a position close to 2011, but was followed by another decline in 2016. However, since 2016, female CFOs have experienced a steep increase in pay. In 2017, compensation for male and female CFOs was almost on par, at $3.28 and $3.29 million, respectively. This was the first year that female CFO pay exceeded male CFO pay, and since 2017, women have consistently out earned men.

Overall, CFO pay trends show that compensation is moving more towards performance based pay. Compensation is on the rise, across all sectors. As more women join the C-suite as chief financial officers, they can expect their pay to rise as well. Pay packages will continue to incentivize CFOs and reflect successful strategic initiatives.