The Equilar Gender Diversity Index (GDI) has now increased for a seventh consecutive quarter. The percentage of women on Russell 3000 boards increased from 19.3% to 20.2% in Q2 2019. This acceleration once again moved the needle, pushing the GDI to 0.40, where 1.0 represents parity among men and women on corporate boards across the Russell 3000. 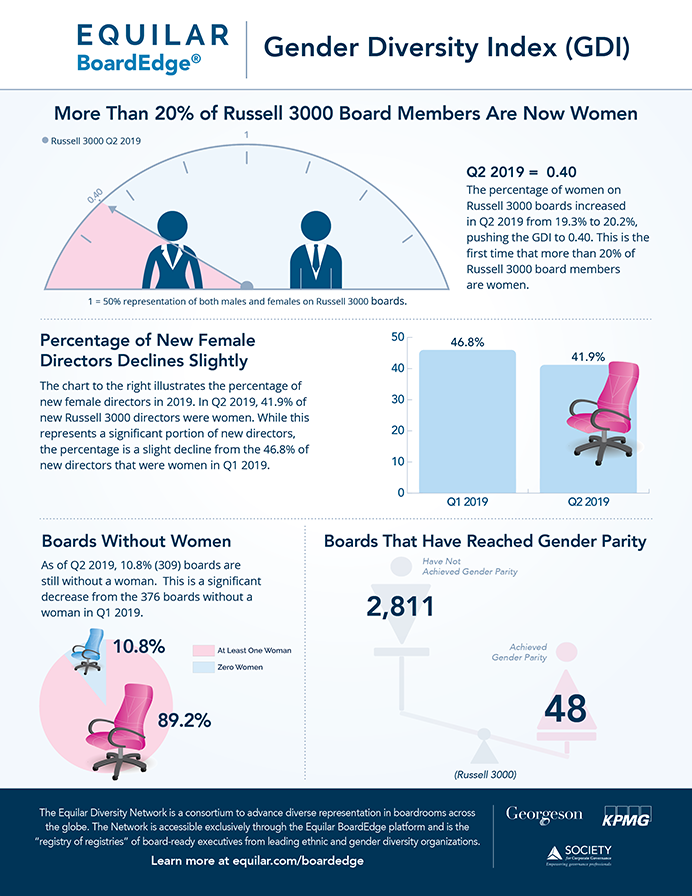 As featured in The Wall Street Journal, the most recent GDI’s revelation that women now occupy 20.2% of board positions across Russell 3000 companies is indeed a milestone mark. This is the first time that women hold more than 20% of Russell 3000 board seats. Achieving this milestone serves as a testament to the many efforts of stakeholders in the governance and corporate communities to drive action on diversity in corporate boardrooms.

The first GDI Equilar published in January 2017 illuminated how little progress had been made. At that point, only 15% of board seats in the Russell 3000 were held by women and less than 25% of board vacancies were being filled by women.

“The current figure is no small accomplishment—just a year ago the Equilar GDI for Q1 2018 indicated that the percentage of women directors among the Russell 3000 was 16.9%,” said Susan Angele, Senior Advisor at KPMG’s Board Leadership Center.” “Reflecting back, the level of progress to get this far has been tremendous. There is much to celebrate, but of course there is still a very long way to go.”

Over the last few years, there have been various external factors that have added pressure on corporations to achieve greater diversity on boards, particularly from investors. In February of 2018, BlackRock—the world’s largest money manager—publicly stated that companies in which it invests should have at least two female board members. Michelle Edkins, Global Head of Investment Stewardship at BlackRock, wrote a letter to Russell 1000 that have fewer than two women on the board to ask them to disclose their approach to boardroom and employee diversity.

Additionally, with the passage of SB 826, the State of California requires that public companies operating within the state to have a minimum of one woman on their board of directors by the close of 2019. That minimum will be raised to at least two female board members for companies with five directors or at least three female board members for companies with six or more directors by December 31, 2021. Violators of this legislation will be subject to financial consequences.

California was the first state to pass a law of this nature, and most certainly not the last. Illinois passed a similar piece of legislation in April of this year that will require any publicly traded companies based in Illinois to have at least one woman and one African American on its board of directors by the end of 2020. As greater attention is placed on diversity efforts across corporate America, it can be expected that more states will follow the paths set by California and Illinois.

Consequently, it appears that corporate America is taking note and at least making a concerted effort to drive change. In Q2 2019, 41.9% of new directorships were appointed to women. In the previous quarter, that figure was as high as 46.8%. There is no question that this ongoing trend has contributed to the increase in the GDI over the last several quarters. 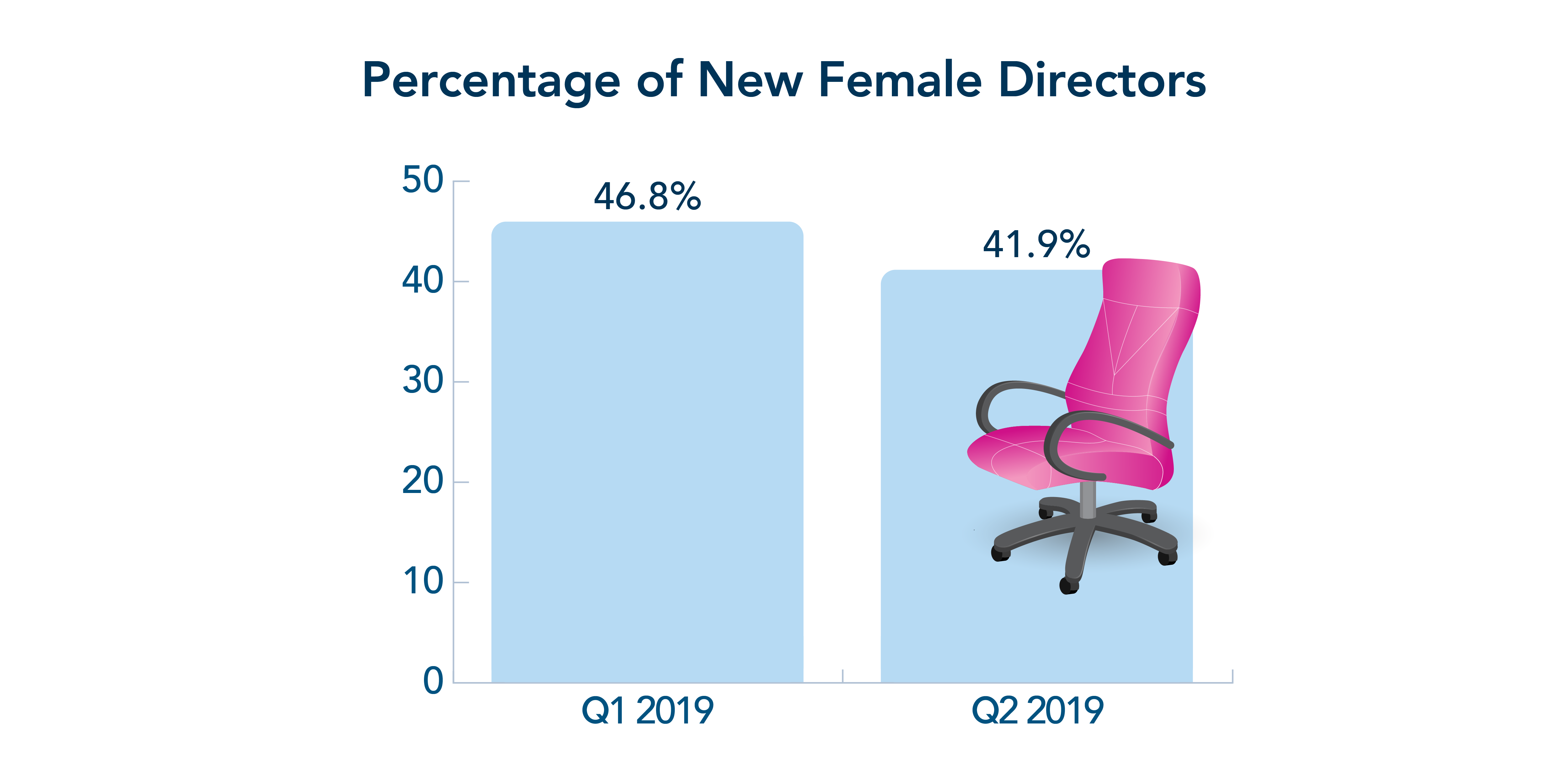 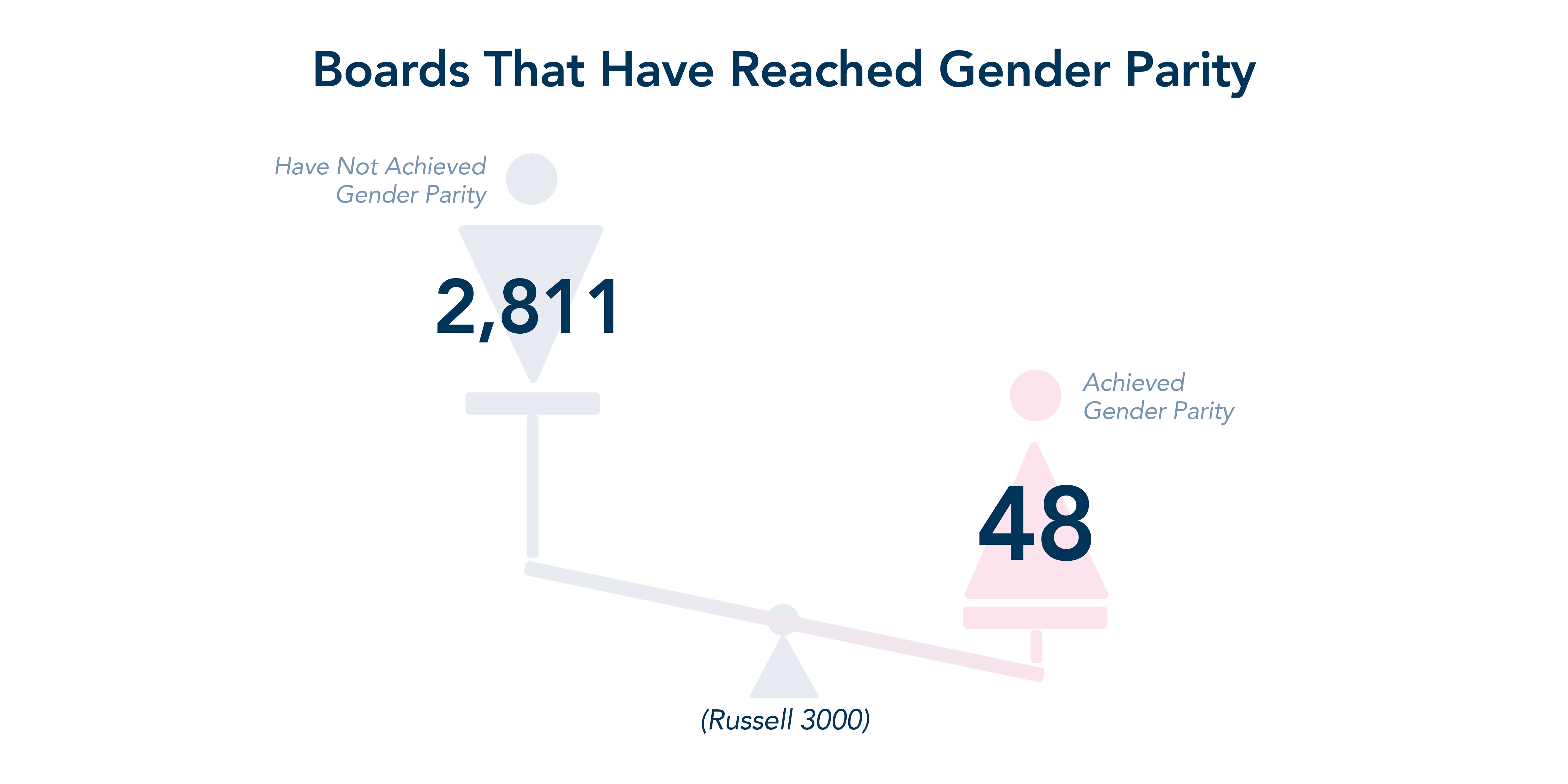 Several organizations across the United States have continued to push for gender parity through a number of initiatives. Equilar partnered with 2020 Women on Boards in 2017 to support its mission in reaching 20% women by 2020—a goal that has now been met, at least across the Russell 3000.

Reaching this milestone in less than three years of releasing the first GDI is meaningful progress compared to the rate of change observed at large-cap companies more than a decade ago. “The gap in representation is closing more quickly than we have seen in the past,” said Belen Gomez, Vice President, Strategic Initiatives and Communications at Equilar. “Staying laser focused on this issue in terms of consistent data reporting has been a critical step in managing progress. It’s essential to take a step back and recognize the collective efforts across the industry to reach this point.”

With 2020 just around the corner, the Q2 GDI results are an encouraging sign for diversity in the boardroom. As corporate America prepares for the top governance issues of the next year, boardroom diversity will certainly be among the highest of priority.

“It’s incredibly timely to hit the 20% threshold as we near the end of 2019,” explained Brigid Rosati, Director of Business Development at Georgeson. “Now, as we approach 2020, we can continue to measure progress on the diversity front by focusing on women added to boards that previously had no or few women, first time female directors and companies that have added other types of diverse candidates to their board.”