Assessing Boardroom Equality Across the Russell 3000 and California

The Equilar Gender Diversity Index (GDI) has now increased for a fifth straight quarter. The percentage of women on Russell 3000 boards increased from 18.0% to 18.5% in Q4 2018. This acceleration once again moved the needle, pushing the GDI to 0.37, where 1.0 represents parity among men and women on corporate boards across the Russell 3000. 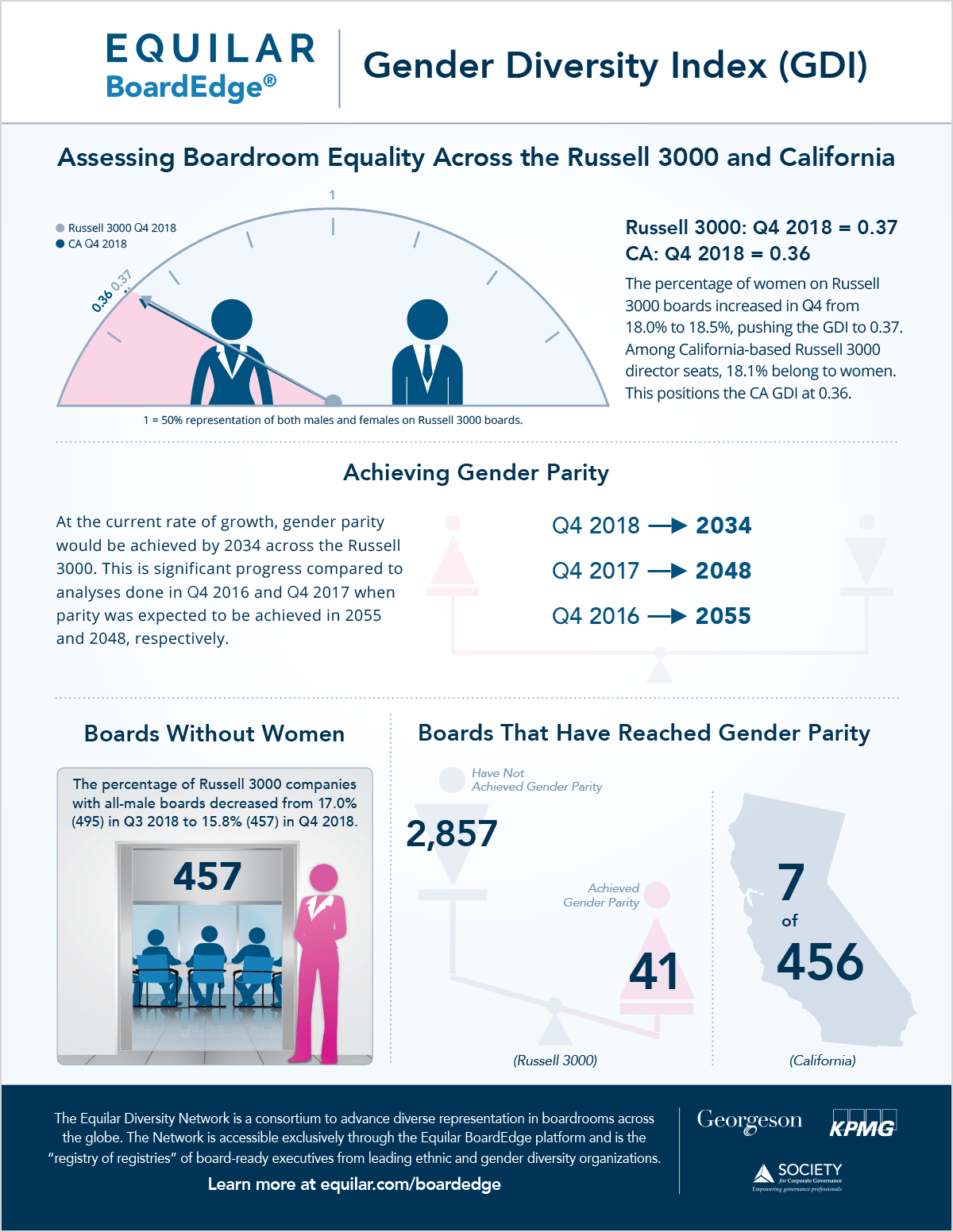 The State of California recently passed a piece of legislation—SB 826—that will require public companies headquartered in California to have a minimum of one female on its board of directors by December 31, 2019. That minimum will be raised to at least two female board members for companies with five directors or at least three female board members for companies with six or more directors by December 31, 2021. Violators of this legislation will be subject to financial consequences.

“It’s safe to say that the percentage of public companies headquartered in California that do not have any women on their boards will decrease significantly,” said Susan Angele, Senior Advisor, Board Governance at KPMG’s Board Leadership Center. “Ideally, this will not be a check the box exercise but rather the visibility of the issue will enable boards to discover new networks and add fresh and valuable perspective to their boardroom discussions.”

Over the last few years, there have been various external factors that have added pressure on corporations to achieve greater diversity on boards, particularly from investors and proxy advisors. In February of 2018, BlackRock—the world’s largest money manager—publicly stated that companies in which it invests should have at least two female board members. Michelle Edkins, Global Head of Investment Stewardship at BlackRock, wrote a letter to Russell 1000 that have fewer than two women on the board to ask them to disclose their approach to boardroom and employee diversity.

“Negative votes from these investors against board directors, particularly against those serving as nominating or governance board chair, can damage the company’s reputation and potentially affect future board composition,” said Brigid Rosati, Director of Business Development at Georgeson. “It is important for companies to understand how investor voting policies might affect any director elections and potentially open the company to other corporate governance concerns and investor scrutiny.”

Indeed, there is a long way to go before gender parity is achieved across the Russell 3000—however, corporate America is moving in the right direction. At the current rate of growth of women on boards, gender parity would be achieved by 2034. This is significant progress from analyses Equilar conducted in Q4 2016 and Q4 2017 when parity was expected to be achieved in 2055 and 2048, respectively. 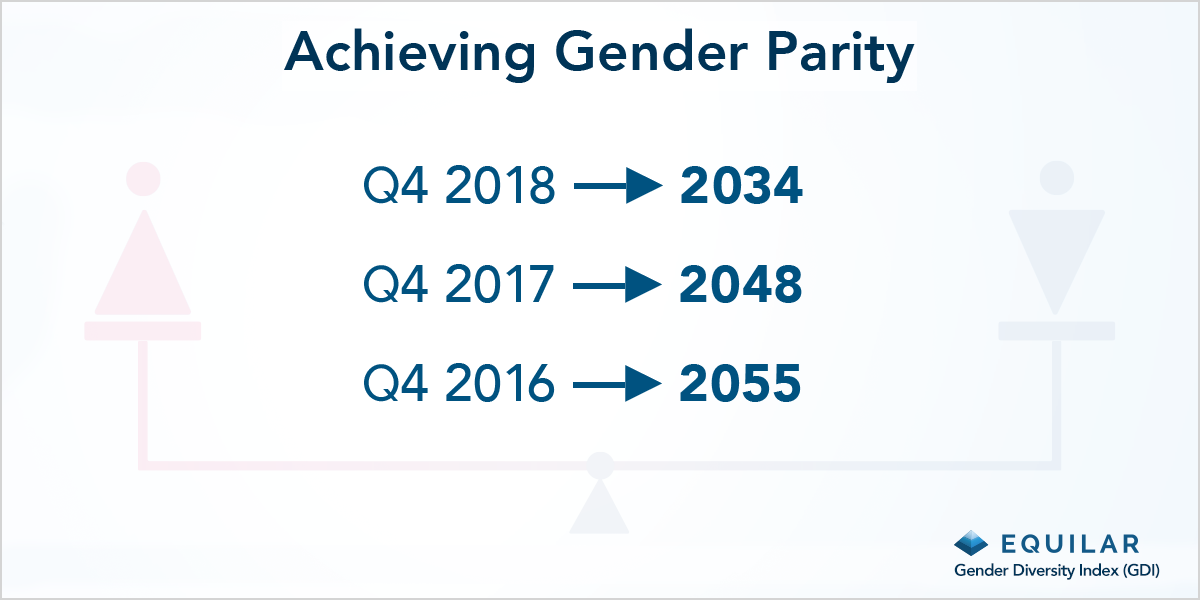 While achieving gender parity across the Russell 3000 may still be years from now, there are many companies that have already accomplished this feat. Currently, 41 companies have achieved gender parity, with seven of those being in California. A slight increase from 37 companies that reached gender parity by Q3 2018. This is a sure sign that companies are becoming more aware of the significance of diversity initiatives and taking action appropriately. 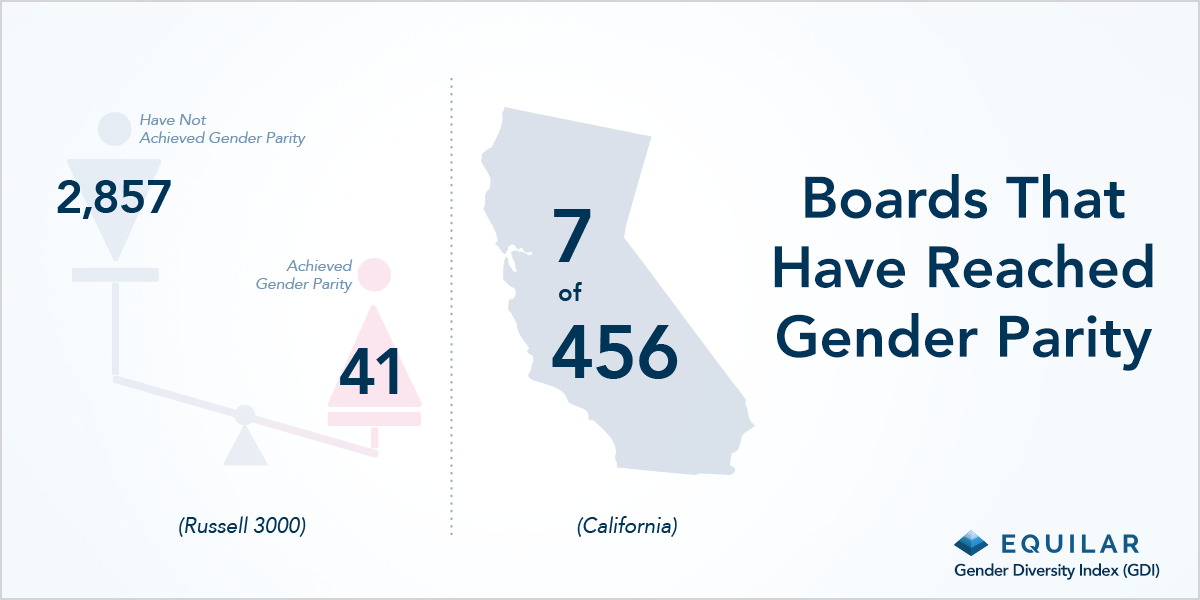 “In addition to external focuses, companies are beginning to better understand the long-term value a diverse board can bring to their company in establishing a successful corporate strategy,” said Rosati. “Overall, better alignment in director skill sets related to the new issues boards are looking at (cybersecurity, technology, corporate social responsibility) will drive improved board competency and efficiency in setting and overseeing corporate strategy.”