For the fourth consecutive quarter—an entire year—the Equilar Gender Diversity Index (GDI) increased. The percentage of women on Russell 3000 boards increased from 17.7% to 18.0% in Q3 2018. This acceleration moved the needle, pushing the GDI to 0.36, where 1.0 represents parity among men and women on corporate boards. 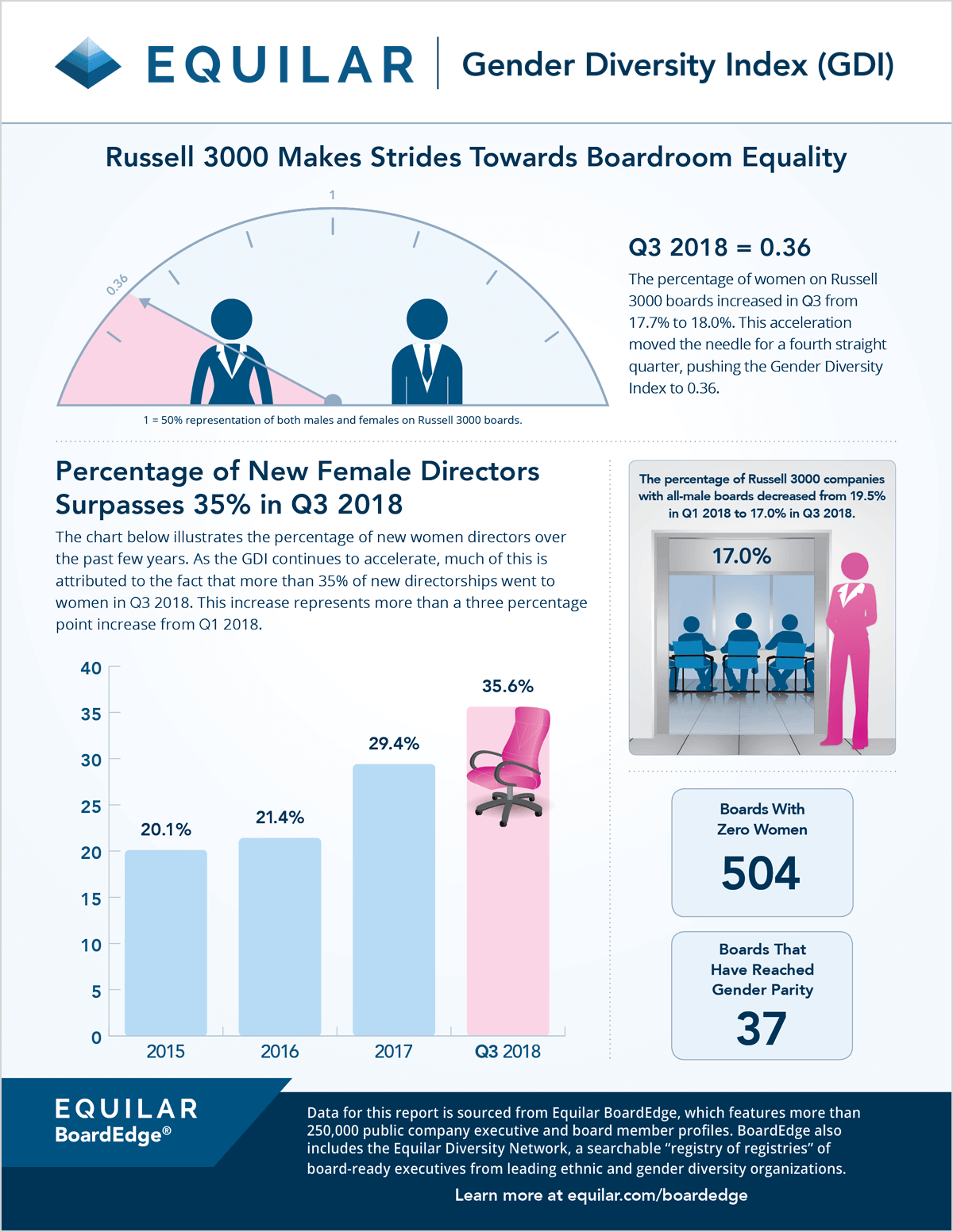 Over the last year, the percentage of new directorships that went to women continued to rise each quarter. Q3 2018 was no different—35.6% of new board seats were filled by women. This has certainly been a lead driving factor in the consistent increase in the GDI. 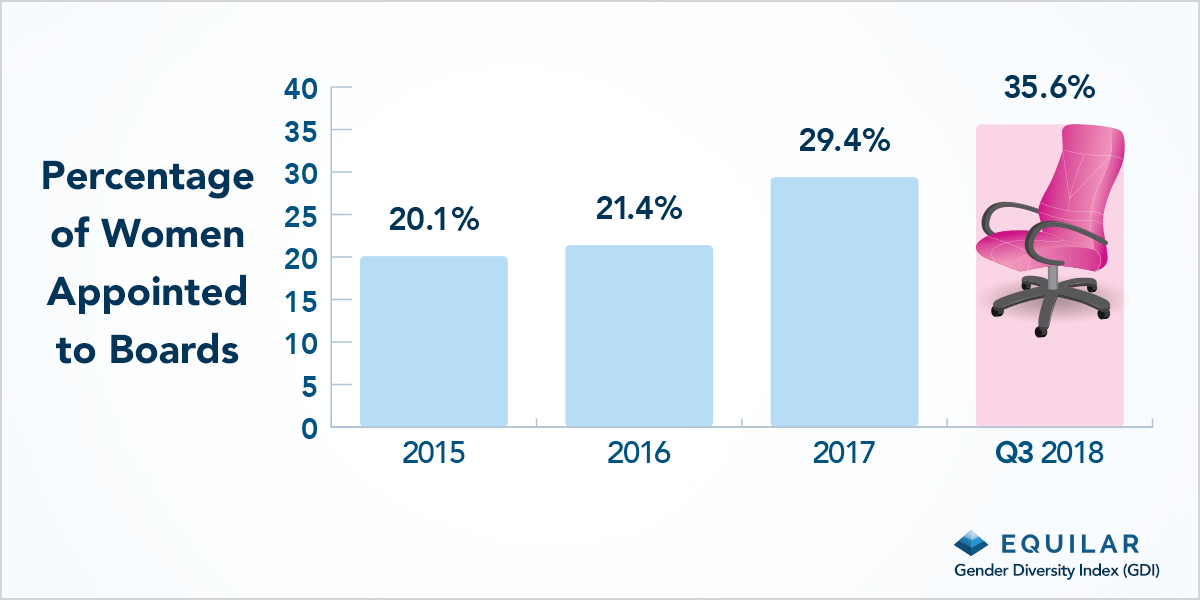 “In Q3 of 2018, over 30% of newly-elected directors were women, which we believe indicates that companies are changing their approach to diversity,” said Brigid Rosati, Director of Business Development at Georgeson. “It seems that companies are beginning to understand better the benefits that a more diverse board can bring, but are also in some cases responding to signs of increased interest from investors, including in the way they vote in director elections.”

Many corporate leaders are also making a concerted effort to implement various initiatives across their organizations to drive awareness on the topic. Last year, PwC U.S. Chairman Tim Ryan launched CEO Action for Diversity & Inclusion, a CEO-driven business commitment to advance diversity and inclusion within the workplace. Currently, 550 CEOs have signed the pledge.

Over the past year, the investor community has placed a heightened emphasis around gender diversity. In February of 2018, BlackRock—the world’s largest money manager—publicly stated that companies in which it invests should have at least two female board members. Michelle Edkins, Global Head of Investment Stewardship at BlackRock, wrote a letter to Russell 1000 that have fewer than two women on the board to ask them to disclose their approach to boardroom and employee diversity, The Wall Street Journal reported.

“We believe that a lack of diversity on the board undermines its ability to make effective strategic decisions,” wrote Edkins in the letters reviewed by the Journal. “That, in turn, inhibits the company’s capacity for long-term growth.”

“Given these developments, companies that lack board gender diversity should consider refreshing their board to add at least one female director in the near term,” said Rosati. “Beyond this, we believe that continued media coverage and scrutiny means that we will see continued pressure from investors towards companies with zero women on their boards.”

The State of California recently passed a piece of legislation—SB 826—that will require public companies headquartered in California to have a minimum of one female on its board of directors by December 31, 2019. That minimum will be raised to at least two female board members for companies with five directors or at least three female board members for companies with six or more directors by December 31, 2021. Violators of this legislation will be subject to financial consequences.

California is the first state in the nation to pass a mandate of this kind, and, most likely, not the last. The past year has shown exceptional signs of progress, and with California leading the way with an official quota, gender diversity will only continue to become a point of focus at boardrooms across corporate America.

“The law is a reflection of a common concern–impatience with the slow pace of change in the boardroom,” said Susan Angele, Senior Advisor of Board Governance at KPMG’s Board Leadership Center. “Boards today need a broad range of perspectives around the table, and the spotlight on gender diversity will continue to increase—not only in California but with institutional investors and other stakeholders.”

The Future State of Board Assessment

The Q3 2018 GDI is indeed a promising sign that boards are taking adequate measures to address the lack of gender diversity in the composition of their boards. The combination of pressure from investors and proxy advisors, as well as legislative quotas, is sure to lead to a continued trend in this direction.

However, there is still an overwhelming number of Russell 3000 companies that have zero women on their boards. According to the GDI analysis, 504 Russell 300 boards lack a female director—an exceptionally high figure.

As we approach 2019, there is no doubt that boards that fall into this bucket will face some level of scrutiny from investors. Companies that want to address this issue—and address it thoroughly—must prioritize practices that promote diversity and the value it brings to a boardroom.

“If you want the most talented board, you cannot limit the talent pool,” H. Rodgin Cohen, Senior Chairman at Sullivan & Cromwell, said in a recent interview for Equilar C-Suite magazine. “If you want the best board, you need to have a meaningful number of women or else you’re just not getting the best people that you could have.”