For the third quarter in a row, the Equilar Gender Diversity Index (GDI) remained at 0.32, as the percentage of women on Russell 3000 boards was steady at 16.2% between June 30 and September 30, 2017. Despite the representation of women on boards staying the same over the latest three-month period, there are signs of progress. The number of boards with zero women continues to decline rapidly, and the number of boards that have reached parity ticked up steadily once again.

Please click on the image below to view highlights from this quarter’s GDI. 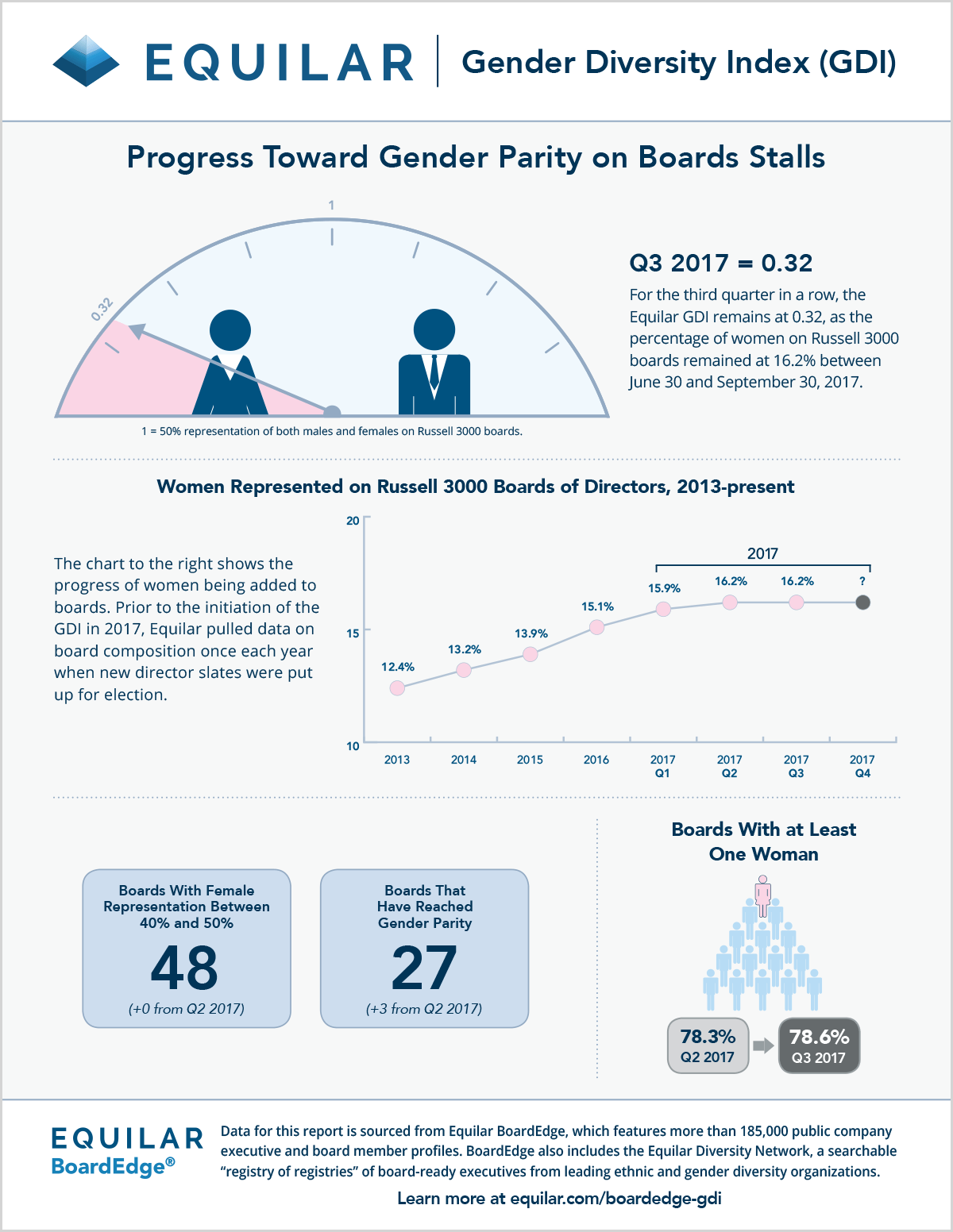 The chart below shows the slow progress of women being added to boards in the past several years. Overall, there has been a slight acceleration on an annual basis. Prior to the initiation of the GDI in 2017, Equilar pulled data each year after proxy season, when new director slates are put up for election. There was a large jump from the middle of 2016 to early 2017, so the question remains whether a similar change will occur at the end of this year as well and feed continued progress at a similar pace into 2018.

“With so much activity related to placing women on boards in recent years, it’s an enigma as to why progress seems momentarily stalled,” said Blair Jones, a Managing Partner with Semler Brossy Consulting Group and a member of the Equilar Diversity Network Advisory Council. “As companies prepare for the primary board nomination season in early 2018, there should be opportunities to once again make positive strides: There is an abundant supply of women director candidates prepared by such organizations as the US 30% Club and DirectWomen.”

“In addition, investors are increasingly expecting more diverse candidate slates and boards,” Jones added. “Just populating the boards with no women with at least one female director would move the needle.”

As part of the quarterly GDI, Equilar tracks several other key metrics that point to where the boardroom is headed: The number of boards with zero women, and the number of board that have reached parity—or are close to doing so. In both cases, the trends are noteworthy, particularly when examined over the past several quarters.

A critical impetus for this study was the revelation uncovered as part of a 2016 study that nearly one-quarter of all public boards had zero women. One year ago, Equilar found that 738 companies in the Russell 3000 had no women on their boards. In the span of about 15 months since that initial study took place, more than 100 companies have added a woman to their boards where one had previously not been represented. Though the image below shows a small quarter-to-quarter gain—from 78.3% of companies to 78.6% having at least one woman—the aggregate increase in this figure over the past year is an important milestone.

“As to the 600-plus boards that remain 100% male, we do know that there are many, many qualified female board candidates that they would be able to choose from when recruiting a new board member,” said Susan Angele, Senior Advisor at KPMG’s Board Leadership Center and a member of the Equilar Diversity Network (EDN) Advisory Council.

Indeed, as institutional investors such as State Street Global Advisors and BlackRock continue to call on boards to address gender diversity—and vote against those that do not effectively and urgently address it—this trend is likely to continue. 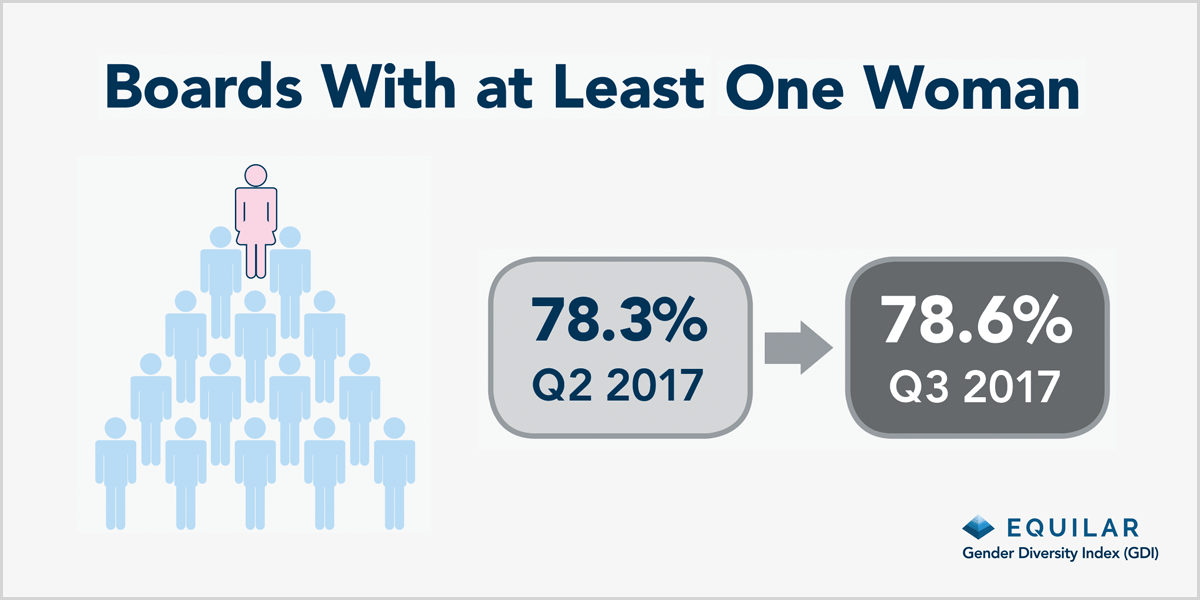 Each quarter since the initiation of this study, the number of boards with at least 50% women has increased as well. In 2016, 21 boards had achieved parity, and by September 30, 2017, that number had increased to 27—half of which joined these ranks in the past quarter (see image below). The list of boards at parity is at the bottom of this article. 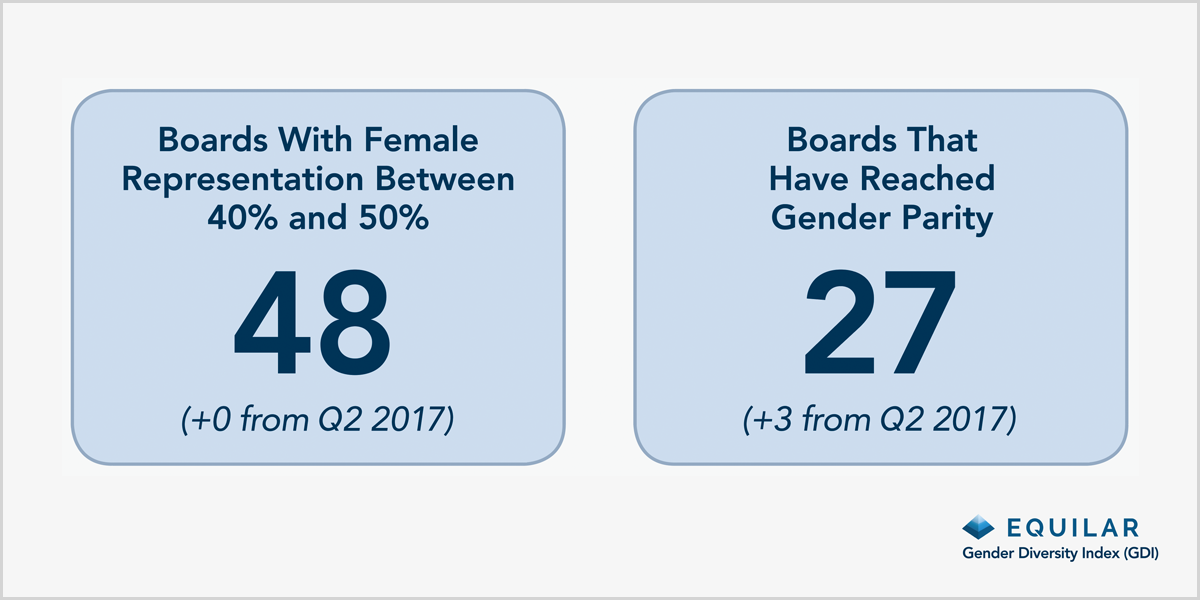 Amit Batish, the Content Manager at Equilar, authored this report. Please contact him at abatish@equilar.com for more information on Equilar research and data analysis. Thao Nguyen and Courtney Yu also contributed to this report.