A top corporate executive serving on another company’s board of directors may provide strategic advantages for both the executive and the company. With the additional perspective gained from unique sets of issues faced by another company, he or she may bring back valuable insights that can help improve strategy and operations. In addition, for the executives themselves, serving on another company’s board can be a valuable professional development opportunity, to the point that some are actively seeking board positions for their top executives to aid their succession planning programs.

The study had two key findings:

It’s important to note that pay and performance in this study represent correlations, not causation. A fair portion of executive pay is forward-looking, in the sense that what is reported to the SEC includes stock and options grants at fair market value on the date they were granted. As a result, if a CFO was awarded a $5 million stock grant in the most recent fiscal year meant to pay out based on performance over a three-year period, the results of backward-looking performance outcomes would not correlate directly to the most recent year’s pay package.

Nonetheless, the study represents an analysis of CFOs who have served their companies for three consecutive years, whether or not they were on another board of directors, and notes differences in pay and performance for those groups of executives. The findings raise important questions for investors and companies when evaluating executive board commitments.

Nearly One-Third of CFOs Served on Outside Boards

The Equilar study analyzed 289 large-cap companies that had CFOs or other principal financial officers who served in that position for the three most recent fiscal years consecutively. Among those, 94 executives also served on at least one other board as of their most recent fiscal year end, while 195 did not. The list of companies from which the sample set for the study was derived can be found here. 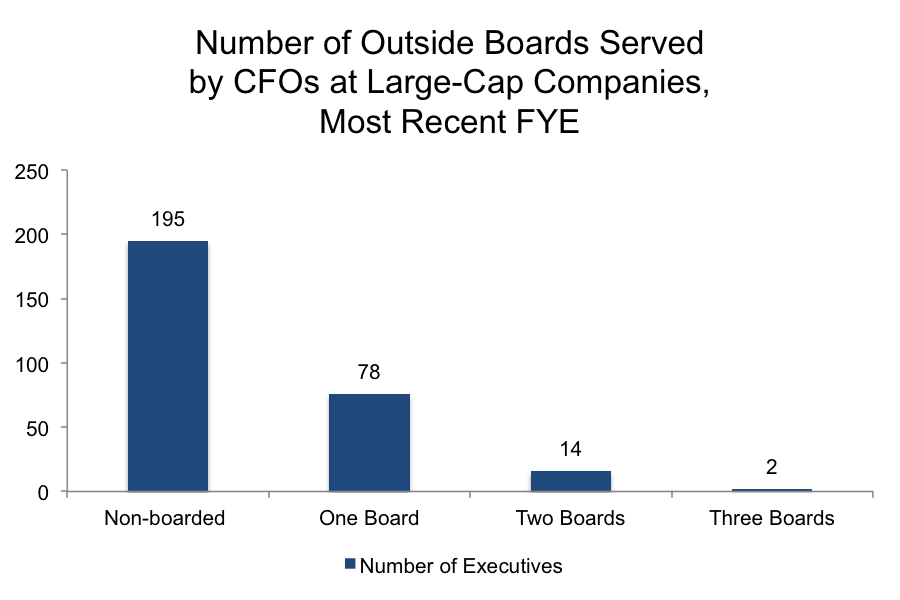 Pay for CFOs in each camp overall was relatively even, though slightly higher for those directors who also served on outside boards. The 94 boarded directors were awarded a median $4.0 million in their most recent fiscal year, vs. $3.9 million for the non-boarded directors—a slight difference of about $75,000. 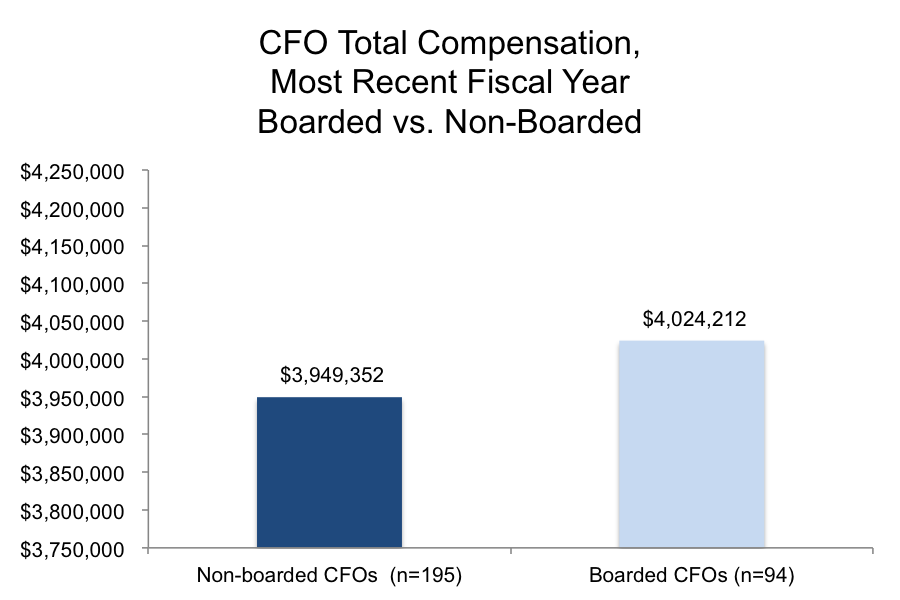 When breaking down the boarded CFOs by the number of seats they occupied, the pay gap widened noticeably. CFOs that also served on two or more boards were awarded a median $5.4 million in the most recent fiscal year, vs. just under $4 million for those directors who served one other board. 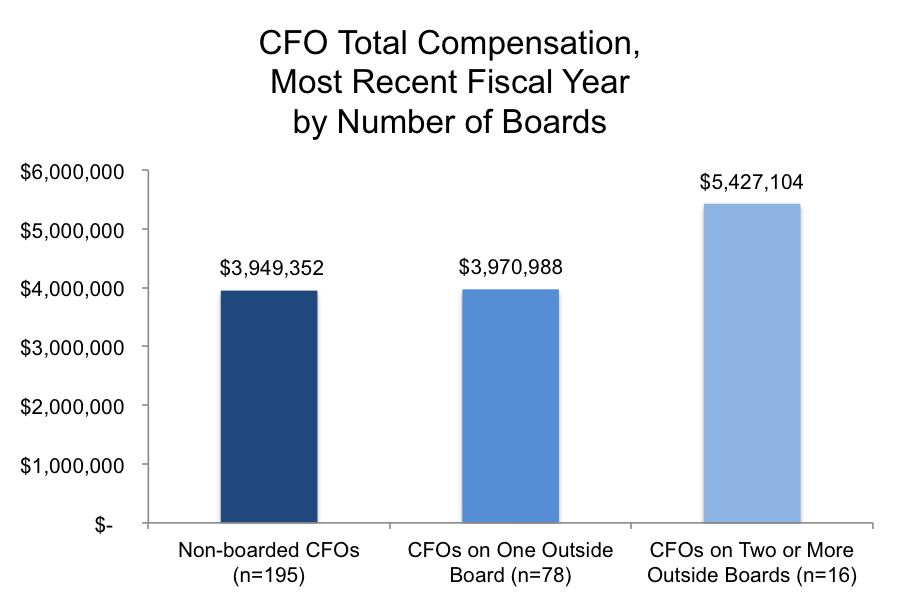 Companies With CFOs on Outside Boards Underperformed Their Counterparts

The pay gap between CFOs that served on multiple boards is notable because median performance outcomes for those 16 companies was lower than all other companies in the study according to three key metrics—total shareholder return (both one-year and three-year), revenue, and net income. 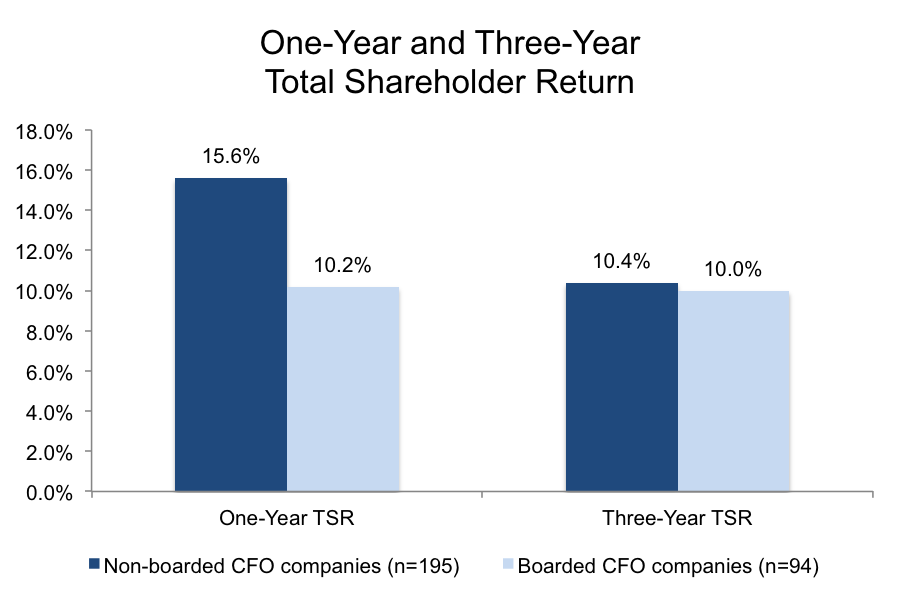 The results are more nuanced when breaking down company performance by the number of board seats their CFOs occupied. While median one-year TSR was slightly higher for companies with a CFO serving one outside board (10.2%) compared to two or more (9.3%)—still well below one-year return for the non-boarded companies—three-year median TSR was the highest for companies where the CFO was on one outside board. The 16 companies with CFOs sitting on at least two outside boards saw a comparatively paltry 3.3% total shareholder return over the study period. 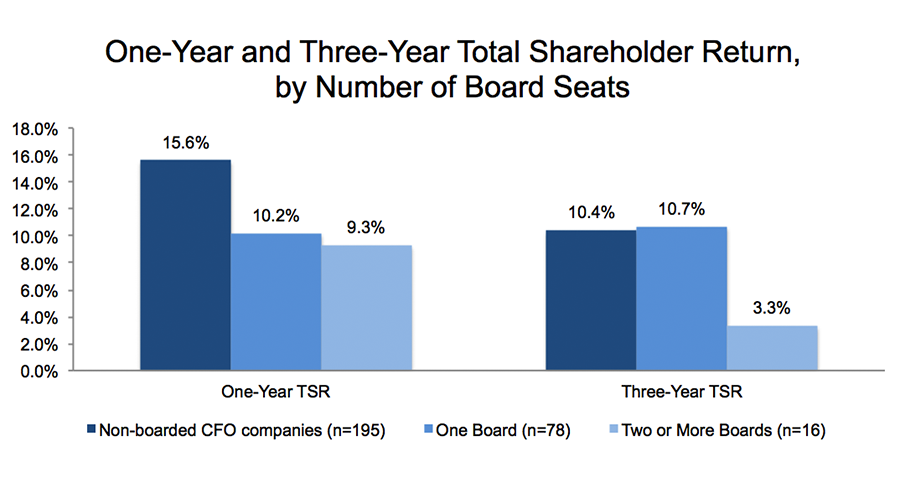 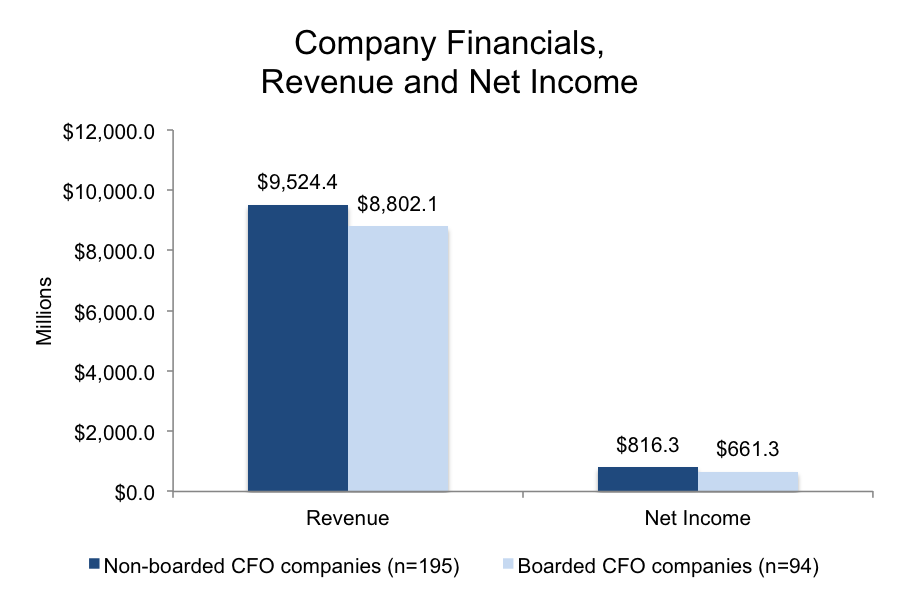 Unlike TSR, financial metrics followed a clear digressive pattern for both revenue and net income as CFOs sat on more outside boards. The companies with CFOs serving on one other board saw median revenue of $8.9 billion and net income of $661.3 million, while those with CFOs on two or more boards had median annual revenue of $7.3 billion in fiscal year 2016, and median net income of $621.5 million. 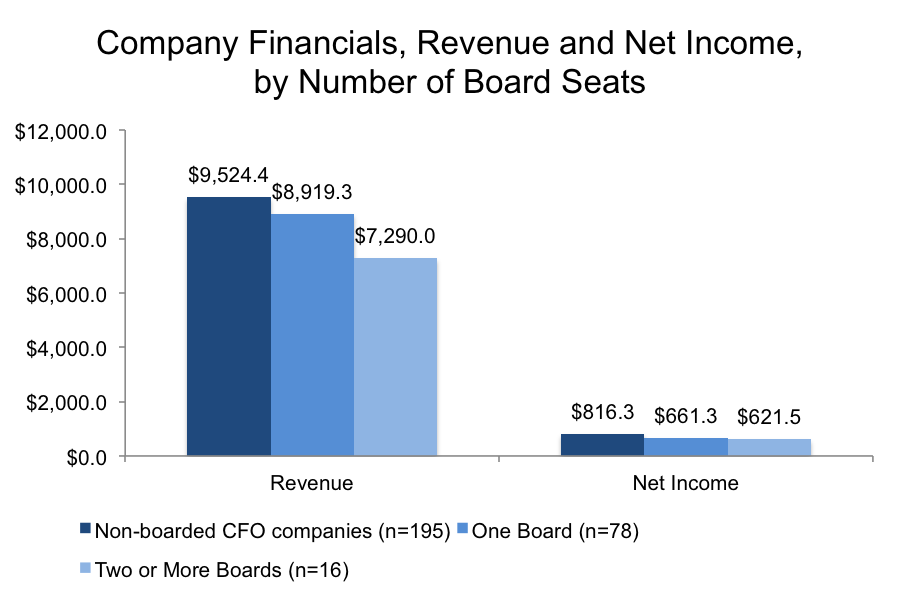 To reiterate, these pay and performance figures are correlations, not necessarily causation, neither to each other nor to board service of any individual CFO. But they beg the question whether a company’s CFO joining an outside board—particularly multiple outside boards—has the same quantitative benefits as the new perspectives and additional insights he or she may qualitatively bring to a company’s C-suite by serving as a director.

The time commitment required to serve boards of directors at public companies continues to increase, and the degree with which board members must be prepared to manage complex and disparate issues has intensified. While any individual CFO may have unique circumstances and capabilities that allows the time and effort to serve multiple boards and his or her company as a top executive, shareholder and proxy advisor scrutiny on the number of outside boards sitting executives should serve will continue to be a point of contention.