Although the dual title of chief executive officer (CEO) and chairman of the board is often a subject of debate in the realm of good corporate governance, it is a useful construct when planning CEO succession.

In certain cases, a former CEO will transition into the role of Executive Chairman, while the new CEO settles into his or her role. While an appropriate level of compensation must be set for the new CEO, boards must also consider the pay package for the newly transitioned executive chairman.

Traditional executive structures are difficult to apply, as long-term retention is not expected and incentives cannot always be justified. Such transitions are rare in general, especially within the context of a company’s peer group.

Equilar research experts considered a sample of 18 S&P 500 CEOs who made this transition within the last five years. Further analysis was conducted on the composition of each company’s compensation before and after the role change.

1. Overall compensation fell as a result of these transitions - A majority (72.2%) of CEOs experienced reductions in overall pay as they made the transition to executive chairman.

2. Cash remained relatively stable - In this sample, cash constituted only 35.7% of the median CEO’s total compensation. The median former CEO could reasonably expect a 30.6% decrease in cash compensation as a result of his or her transition.

3. Equity represented the majority of this decline - Stocks, units, options and stock appreciation rights (SARs) collectively represented 64.3% of the median CEO’s pay. This portion was subject to a median decrease of 72.5%, perhaps due to the waning importance of retention and incentives.

“In 2004, Larry, Sergey, and Eric asked that their base salaries each be reduced to $1 per year. Since 2005, the LDC Committee has offered them market-competitive salaries at the beginning of each year, which they would decline. In 2011, Larry and Sergey once again declined our salary offer and continued to receive base salaries of $1. We also offered Eric a base salary of $1.25 million due to his new role as Executive Chairman. He accepted this change, which became effective as of April 4, 2011.” 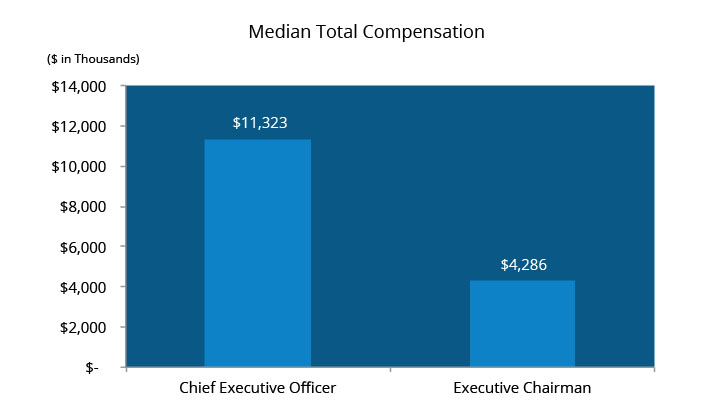 When determining actual figures, boards often benchmarked companies in their peer groups, with 38.8% percent of boards disclosing that they used either market data or a consultant company to set pay for the former CEO’s new role.

“In connection with his new role and distinct responsibilities as Executive Chairman, the Compensation Committee established a separate compensation program for Mr. Stebbins with higher fixed compensation and a significantly reduced performance-based component.”

Cash makes up a relatively small portion of the typical executive’s overall pay package. In this sample, cash constituted only 35.7% of the median CEO’s total compensation. Accordingly, a relatively minor share of the decrease in compensation can be attributed to a reduction of cash grants.

The median former CEO could reasonably expect a 30.6% decrease in cash compensation as a result of his or her transition. When long-term cash targets are excluded as they were not awarded in any instances to chairmen this number further diminishes to 27.6%.

As shown below, changes were minimal. Approximately 55.6% of executives received less cash post-transition, 33.0% saw no change and 11.1% received more cash. 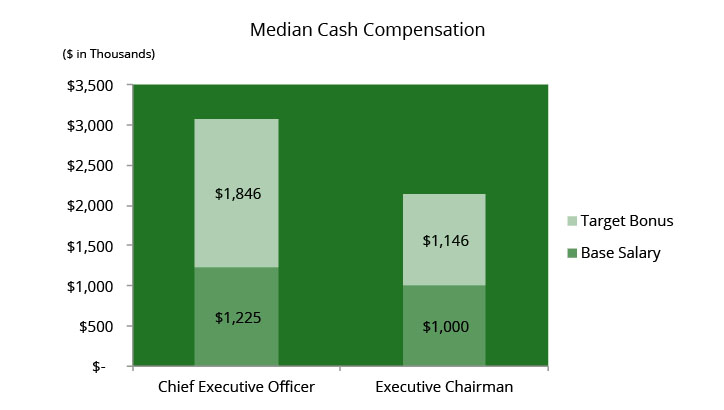 Equity grants are much more ubiquitous in executive pay compositions, due to their inherent ties with shareholder interests and retention-promoting nature. Overall equity grants declines during the transition from CEO to executive chairman. 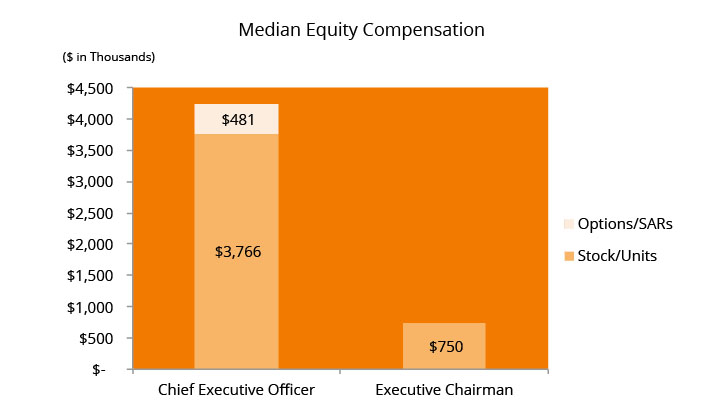 Median total equity fell from $6.1 million for CEOs to $1.7 million for executive chairmen, which represented a 72.5% decline.