REDWOOD CITY, CA (November 1, 2018) —Over the last few years, the scope of responsibilities for General Counsel (GC) has continued to expand. As a result, compensation for the top legal officer has increased, according to a new report from Equilar, General Counsel Pay Trends, featuring commentary from BarkerGilmore. Median total compensation increased by almost 7% from 2016 to 2017, according to the study,

The report examined companies by revenue range in order to show how different companies of different sizes award compensation. Overall, GC compensation increased substantially across all revenue buckets in the Equilar 500, with the exception of the $5-10 billion revenue group. 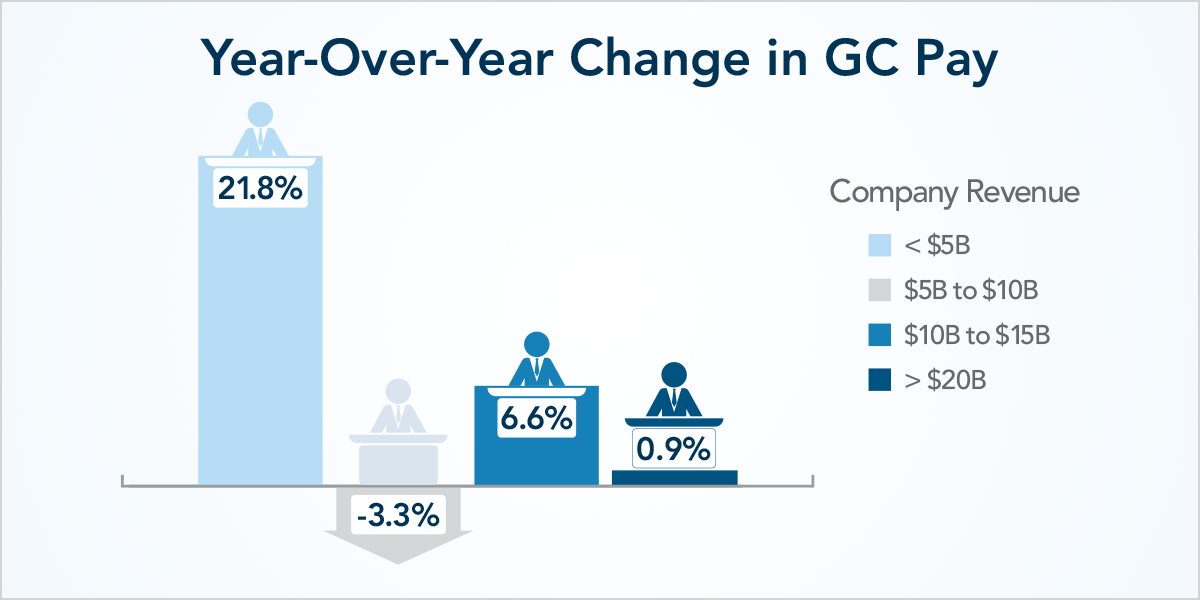 A contributing factor to the overall increase in pay for GCs is the expansion of the role. “The General Counsel role has shifted beyond what one would have traditionally considered as core ‘legal’ accountabilities and has expanded into the space of the General Counsel having accountability for much broader enterprise risk management activities and strategies,” said Cornell Boggs, Senior Advisor at BarkerGilmore. “General Counsel are required to be proactive partners with other members of the leadership team in the business.”

As GCs continue to gain a seat in the C-suite, their level of prominence among executive management teams becomes greater. Consequently, top officers look for high quality candidates when it comes to filling the GC postion.

“CEOs expect General Counsel candidates to bring a higher level of gravitas, persuasive communication and assertiveness to the table,” said Robert Barker, Managing Partner at BarkerGilmore. “The General Counsel is expected to be a spokesperson for the company and those lacking the ability to effectively communicate on the company’s behalf are not going to be successful in the recruiting process.”

General Counsel Pay Trends, an Equilar publication, analyzes the compensation of General Counsels (GC) disclosed in the SEC filings by Equilar 500 companies for the fiscal years of 2016 and 2017. The Equilar 500 is comprised of the 500 largest, by reported revenue, U.S.-headquartered companies that trade on one of the three major U.S. stock exchanges (Nasdaq, NYSE or NYSE American), with adjustments to compare to the sector mix of similar large-cap indices. Fiscal year one was defined by companies that filed proxy statements from July 1, 2017 to June 30, 2018, and earlier years were defined similarly.

Equilar is the leading provider of Board Intelligence Solutions. Its data-driven platforms, BoardEdge and Insight, provide tools for board recruiting, business development, executive compensation and shareholder engagement. Companies of all sizes, including 70% of the Fortune 500 and institutional investors representing over trillion in assets, rely on Equilar for their most important boardroom decisions. Equilar also hosts industry-leading board education symposiums, conducts comprehensive custom research services and publishes award-winning thought leadership. Founded in 2000, Equilar is cited regularly by Associated Press, Bloomberg, CNBC, The New York Times, The Wall Street Journal and other leading media outlets. Visit www.equilar.com to learn more.

BarkerGilmore is a boutique executive search firm dedicated exclusively to the placement of General Counsel, Chief Compliance Officers and their strategic hires. Our niche concentration affords us access to a specialized network of talent, and we have established the relationships that allow us to identify the best legal professionals for any assignment. We are attentive to each of our client’s business culture and understand their brand, strategy and leadership needs. We pride ourselves on being able to provide the highest standard of service and at establishing meaningful and long-lasting relationships with our clients.

The hard measures of our operational efficiency keep existing clients returning to the firm and provide our new clients with the peace of mind of knowing the success of their search is inevitable. Our industry leading, audited metrics over the past three years include: a 96% retention rate of placements made, 44% of which are women, 24% ethnically diverse, a 96-day average timeframe to execute a search, and guaranteed results. www.barkergilmore.com.