Chairman/CEO Votes: Signs of Shareholder Trust or Playing It Safe? 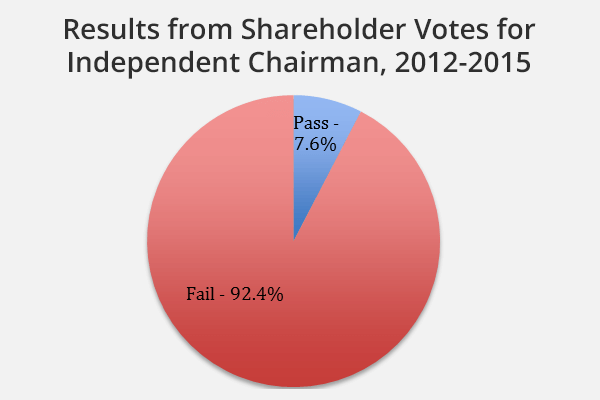 On September 22, Bank of America shareholders voted whether CEO Brian Moynihan would continue in his role as Chairman of the Board. In the weeks leading up to the shareholder meeting, many wondered if a vote to split the roles and implement an independent chairman would set a precedent.

That was not to be. The bank’s shareholders chose to maintain its current leadership structure, and Moynihan will remain both CEO and chairman. Early results from the meeting said 63% voted in favor of the proposal.

Indeed, shareholder votes on whether a board chair should be independent of the CEO are commonplace, and Bank of America’s result was not unique. Equilar conducted a study of all shareholder proposals to separate the Chairman from the CEO position, and of 236 proposals in the past four years, 92.4% failed, totaling 218 votes in favor of maintaining a unified CEO and chairman role. In 2015 alone, there have been 63 shareholder proposals of this nature, and only two—Vornado Realty Trust and Omnicom Group—have passed. Interestingly, both passed by a measure of 54% to 46%.

Overall, the average “nay” vote was 67.5% for the entire set of companies, meaning most of these votes are not typically close.

Bank of America’s situation was unique in that the company’s management actively called for the vote as a measure of shareholder engagement. These types of transparent and open communications with stakeholders are becoming more common as companies aim to stay ahead of activists when they make decisions that could be construed as controversial.

As the data shows, shareholders have overwhelmingly shown a tendency to vote in favor of the board to use its discretion when it comes to governance matters. But whether this data shows overwhelming votes of confidence—or whether shareholders don’t want to rock the boat and keep the status quo—is up for debate. We’ll continue to keep an eye on these trends going forward as a measure of shareholder engagement and the communications between boards, management, and other stakeholders.