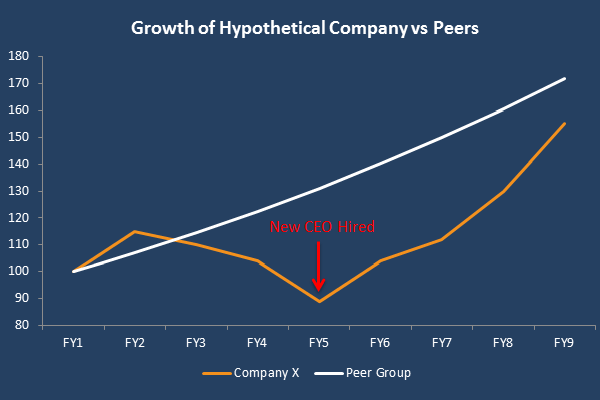 The Securities and Exchange Commission (SEC) recently released language concerning the Pay Versus Performance disclosure required by the Dodd-Frank Wall Street Reform and Consumer Protection Act. Public comment on the proposed rule is open until July 6, but in the meantime, we can preview some of the issues companies and other interested parties may be having with the current text of the proposal.

Potential Issues with Pay Versus Performance

To illustrate some of the potential issues with the proposed rule, we can look to a hypothetical company. As shown in the graph above, this company declined for three years beginning in FY2 before replacing their CEO in FY5. The new CEO engineered a rapid turnaround, and in the four years following the hire, the company made up almost all ground they had previously lost relative to their peers.

The SEC’s proposed rule, though, compares compensation to five-year total shareholder return (TSR). This means that during the first five years of a CEO’s tenure, pay is juxtaposed with company performance that includes time under the previous CEO. In our hypothetical example, the company’s TSR metric is significantly below peer group until the new CEO’s fourth year. Even then, it only shows a slight outperformance despite the fact that the company has grown over twice as fast as its peers in the four years since the new CEO took over.

This potential issue affects a large number of companies, as 42% of S&P 1500 CEOs have been with their current company for less than five years. 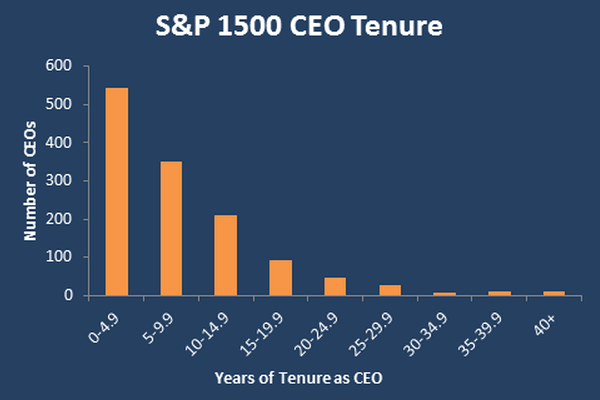 Companies frequently grant new executives large, one-time equity awards upon hire. Indeed, 69% of CEOs in the S&P 1500 who began their tenure during the 2014 fiscal year received one of these awards, which had median vesting period of three years. Sign-on grants are typically awarded to induce executives to leave their previous employer by replacing the unvested equity they will forfeit upon departure. Also, from a governance perspective, companies award these grants in order to align executives’ incentives with those of the company.

While new-hire awards are certainly significant aspects of an executive’s pay package, they also obscure the relationship between a company’s pay structure and the performance of the executive during the vesting period of that initial award. This results in compensation during the first several years being much higher and less related to performance than it will be in the future, all the while being compared against a TSR that includes little time that the CEO actually worked there.

Another issue that companies are likely raising with the current text of the rule is the lack of compensation benchmarking included in the table. While the company’s TSR is helpfully compared to the TSR of its peers, the compensation data stands alone. Thus, an investor can easily see whether a company is underperforming its peers but has no context for determining whether the compensation level is appropriate.

For more information and insight into the SEC’s Pay Versus Performance rule, as well as many other compensation-related topics, visit our Webinars & Videos page.