U.S. States With the Highest Prevalence of Women Directors

The focus on diversity in America’s boardrooms is more prevalent than ever before. Corporations have taken tangible action against the male-dominated stacking of the boardroom, which is becoming an empowering trend that has brought a fresh perspective to organizations around the country. The Q1 2022 Equilar Gender Diversity Index (GDI) shows progress is being made, as the GDI moved from 0.53 to 0.54 during the first quarter of 2022. This indicates the total percentage of women in the boardroom has increased from 26.7% to 27.2% by the end of the first quarter. While this is marked progress, there are substantial steps left to take to reach parity, represented as a GDI of 1.0. 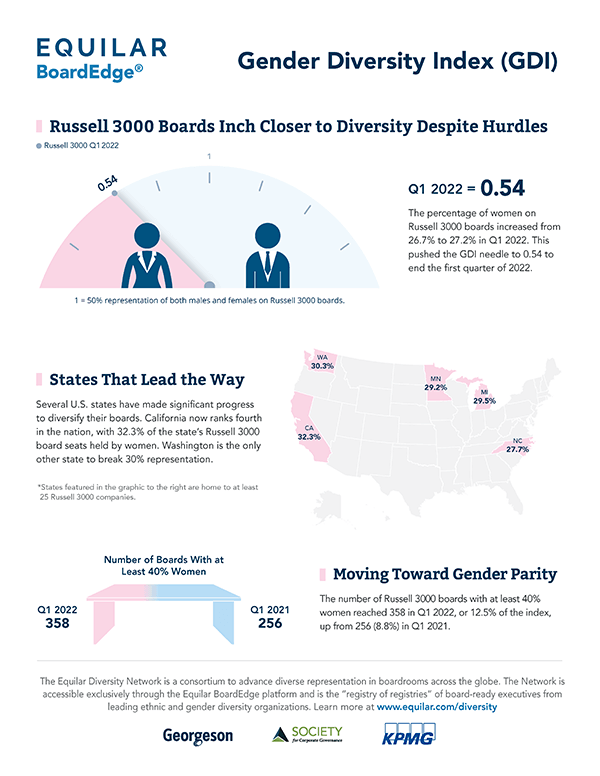 Beyond the movement of the GDI seen in Q1 2022, there are additional trends surrounding the presence of women at the board level. For example, 5.5% of Rusell 3000 boards added a woman to their board structure (after having no women in that role) in the last quarter. Meanwhile, approximately 51.4% of new women directors are first-time directors. While this figure is down from last year (52.9%), it speaks volumes to the fact that boards are looking for women directors outside of those who already have boardroom experience.

On the other hand, the prevalence of new directors who are women decreased from 47.7% in Q4 2021 to 40.7% in Q1 2022. Of course, gender isn’t the only form of diversity, and some might argue that other forms of diversity, such as ethnicity or sexual orientation, may be responsible for the slight slowdown in the progress of women on boards. “Board diversity is not, and should not be, a zero-sum exercise,” said Susan Angele, Senior Advisor, Board Governance at KPMG’s Board Leadership Center. “Given all of the issues boards grapple with today, diversity of background, skills and perspectives could not be more important.”

Pressure for diversity on boards is coming from various directions, including from investors. “In the five years since the launch of State Street Global Advisors’ Fearless Girl Campaign in 2017, U.S. companies have made great strides to improve gender diversity on boards,” said Brigid Rosati, Managing Director, Business Development and Corporate Strategy, at Georgeson. “Every year, the number of women serving on Russell 3000 boards increases: 27.2% of board members in Q1 2022 were women, compared to 15.9% in Q1 2017. However, this quarter we saw a decrease in female additions to boards. In the last two years, many investors emphasized the importance of racial and ethnic diversity on boards which may likely be one of the reasons for the slowdown in gender parity. Both are progressing hand in hand as more stakeholders recognize the importance of having a diverse board.”

The “State” of Diversity Across the U.S.

Over the last few years, legislators have emerged as strong advocates for greater diversity in the boardroom. In 2018, California became the first state to mandate companies have women on their boards when it passed SB 826. The law stipulated that publicly-held California businesses would have to place at least one woman on their board at the conclusion of 2019. Past this point, the law went a step farther, mandating that every business with five members on a board must have at least two women as present members—subsequently, a board of six must have three women as present members.

However, last month a judge struck down SB 826 and deemed it unconstitutional. The rationale for the verdict was made by Judge Maureen Duffy-Lewis, who stated that there was not ample evidence that this was creating room for the advancement of women’s careers and did not make a significant process in protecting California taxpayers. The verdict also stated that the mandate was unconstitutional in the context of the state constitution. More recently, a California judge also struck down the state’s boardroom ethnic diversity requirement for similar reasons.

Despite the new hurdle in the state of California, data shows that the gender mandate was indeed having an impact on the state. When SB 826 was passed in 2018, California ranked just 29th among all U.S. states in terms of the prevalence of women on boards, with representation at 17.4%. The state now ranks fourth as women represent 32.3% of all Russell 3000 board seats in California. Washington is the only other state in America to mandate boards to include women, when legislation went into effect in January 2022. Washington currently ranks ninth among states, with 30.3% of board seats held by women as of Q1 2022. 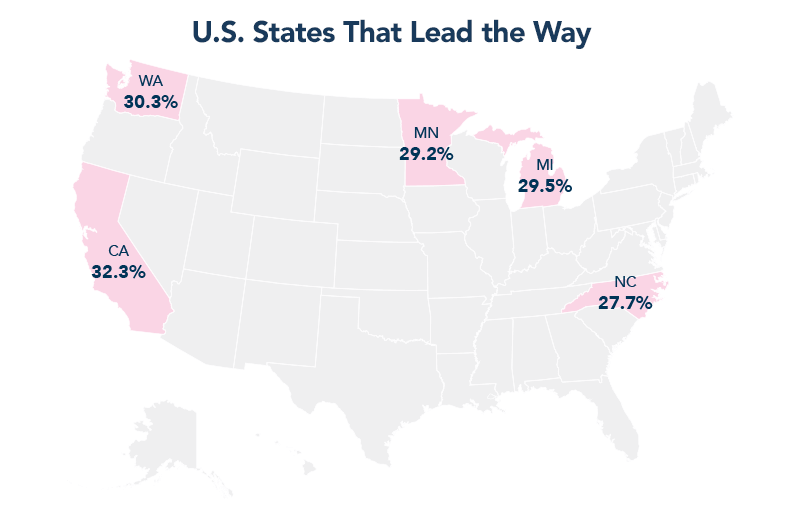 North Dakota has the highest prevalence of women on boards at 37.2%, though the state is home to just five Russell 3000 companies. Among states home to at least 25 Russell 3000 companies, California and Washington lead the way on representation, followed by Michigan (29.5%), Minnesota (29.2%) and North Carolina (27.7%). The full list of U.S. states and their representation is below.

Prevalence of Women on Boards by U.S. State

Board diversity will continue to be a topic of interest for years to come, and the onus is on individual companies to make the effort to drive progress. Of course, there are several benefits for corporations to bring more diversity to their boardrooms. “From experience, we know that boards that are intentional about board diversity—and expand their searches to tap into talent pools beyond their immediate networks—are finding highly qualified candidates who bring unique and valuable skill sets and perspectives to the table,” said Angele. “Indeed, when the KPMG Board Leadership Center examined the backgrounds of the women who joined previously all male boards after the California law was enacted, we found that most held C-suite positions and had at least one advanced degree, with many having two or more, bringing a wealth of experience and expertise to their director service.”

Nevertheless, the findings from the Q1 2022 GDI are certainly promising for gender diversity initiatives. As DEI initiatives continue to capture the spotlight in Corporate America, there is no question the topic of board diversity will be front and center within DEI-related discussions. 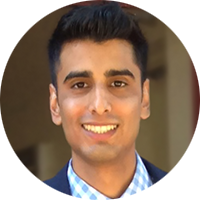