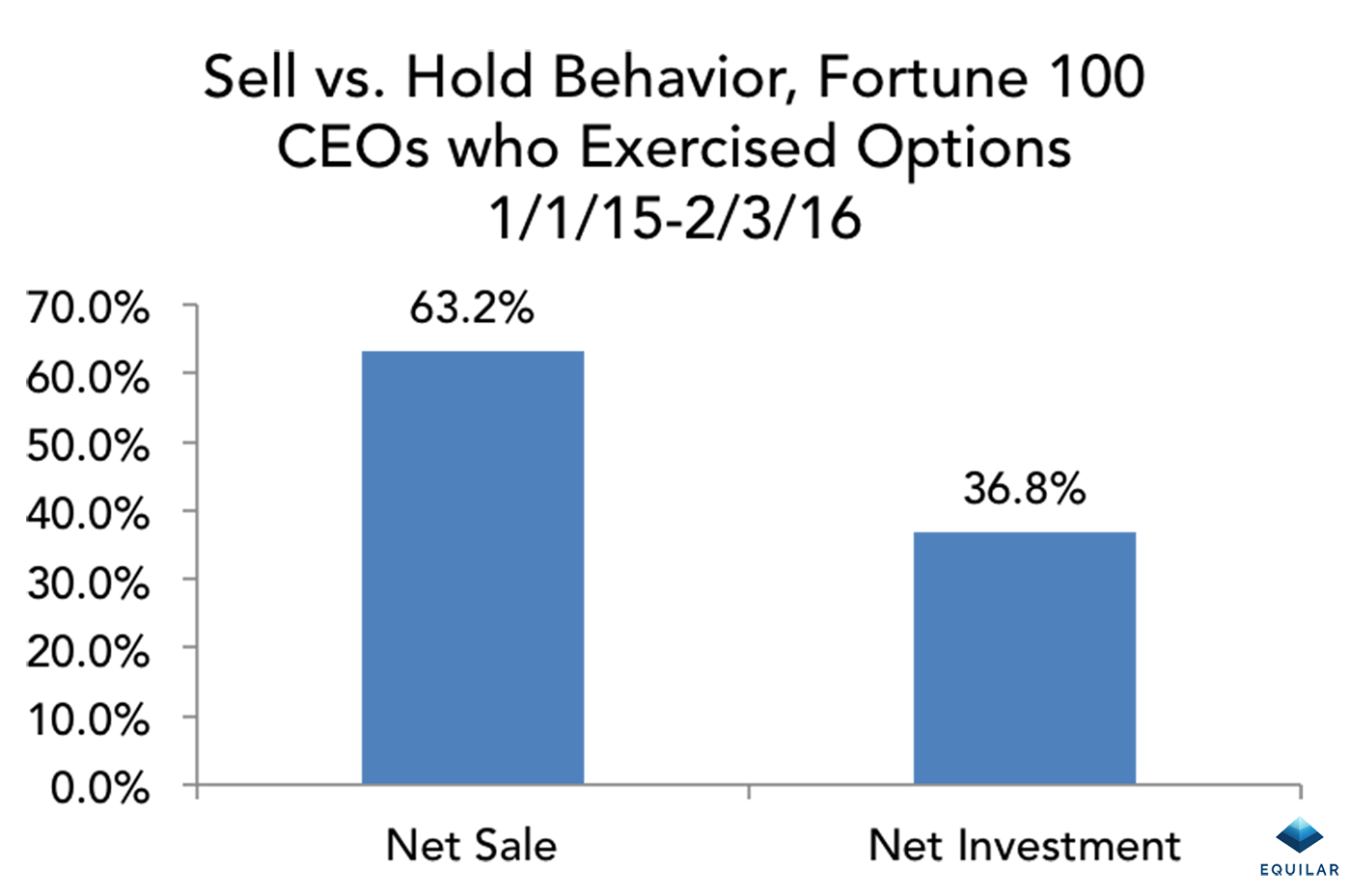 Stock options can be a sticky issue in executive compensation, and as a result, their popularity as a means to pay corporate executives has waned over the last few years. Debates over the utility of options as an equity vehicle center on discussions of accounting expenses, equity plan and shareholder dilution and whether or not options are indeed performance-based pay. And yet, 58.0% of S&P 500 CEOs received time-vesting stock options in fiscal 2014, according to Equilar’s 2015 CEO Pay Strategies report.

In a previous post on the exercise habits of Fortune 100 executives, Equilar found that 47 CEOs and founders exercised options between 1/1/2015 and 2/3/2016, with a median intrinsic value of about $2.1 million per exercise. The maximum exercise in the analysis was just over $105 million. As part of the analysis, we noted the recent case of Elon Musk, the founder and CEO of Tesla Motors, who exercised more than half a million options in late January and held onto all of them. A group at UCLA’s Anderson School of Management found a positive relationship between an executive’s decision to hold onto shares acquired by exercising options and “good news” for the company, and indeed, after reaching a quarter-low $143.67 on February 10th, the day Tesla announced its Q4 earnings, Tesla stock rebounded back to $177.74 by February 23rd.

While the details surrounding a high profile entrepreneur CEO offer a nice anecdote, Equilar dug into the Fortune 100 study a bit further to unveil whether those CEOs and founders exercised options as an investment or as an exit. To do so, we analyzed the daily exercise and trading activity of all 47 Fortune 100 CEOs and founders in the study, accounting for options exercised and forfeited, and shares sold.

Executives will often forfeit shares to settle taxes owed on their exercise or sale, and of the 117 daily exercises that occurred, 63.2% represented net sales, meaning that executives sold or forfeited as many or more shares on the same day they exercised options. Executives made a net investment in their company the other 36.8% of the time, meaning they sold or forfeited fewer shares than they exercised. In other words, these CEOs and founders favor cashing out their options compensation.

Of those days—43 in total—when Fortune 100 CEOs or founders chose to hold onto some or all exercised options, executives held all of the newly acquired shares on six of them. The median percentage of shares held in those instances was 22.5%, and the average was 31.0%. The minimum percentage of shares held, when executives held shares at all, was 1.8%. No executive in the study sold or forfeited more shares than they exercised on any day of trading.

Given that all acquired shares were held after only six of the 117 daily exercises—5.1% of the exercises in Equilar’s study—Fortune 100 CEOs and founders appear to view option exercises as a means to convert their options pay into cash or other vehicles for their own purposes. Shy of speculation on motive, retention of some or all of exercised options does indeed represent a net investment in a company’s future prospects and keen observers would be wise to take note.