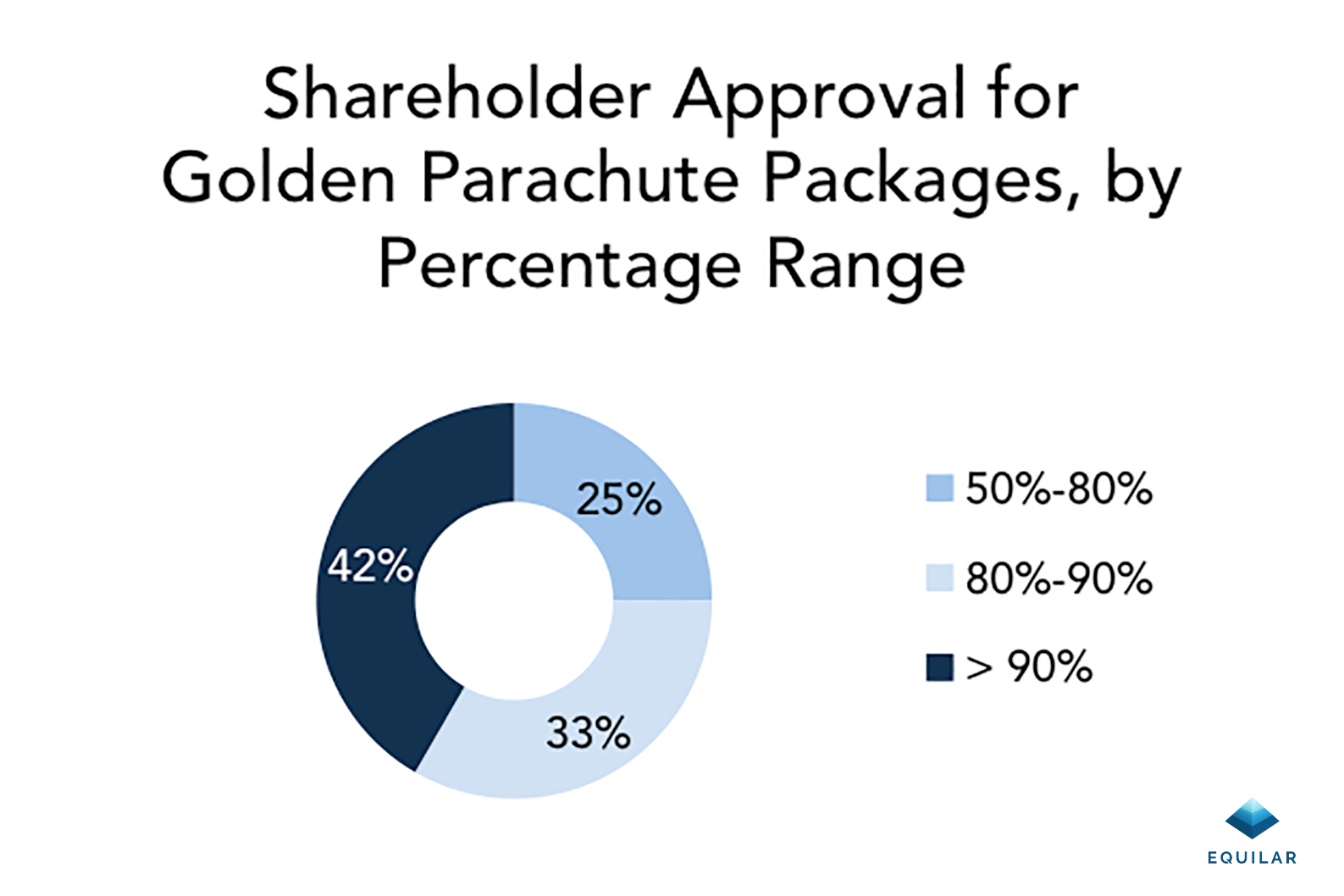 As 2015 comes to a close, several major M&A announcements, proposals and rumors are making headlines. In many of these cases, the often-large sums of money outgoing CEOs and other executives stand to receive as severance—also known as golden parachutes—become front and center.

Companies use golden parachute clauses to help attract executives and, in theory, help ensure those executives act in the best interest of the company without concern for their own job security. But because of the amounts they can reach, golden parachutes are also a source of considerable controversy. They can be seen as deterrence to productivity or an incentive to sell the company even if not in the shareholders’ best interest. In high-profile acquisitions, these packages become even more controversial if the perception is that an executive is being rewarded for failure.

For example, investor talks around the future of Yahoo created much buzz about Marissa Mayer’s potential payout were the company to be sold or merge and she were to be terminated. At the end of 2014, when the company’s stock price was over $50, that figure was nearly $160 million. In early December 2015, that figure totaled $59 million, mainly due to a difference in stock price and a vesting of one-time awards throughout the year. With Mayer under pressure from activist shareholders and often considered to have succeeded in steadying but not elevating Yahoo as its CEO, the large potential sum gained significant attention, even with a notable drop from reported figures.

In another recent scenario, Newell Rubbermaid agreed to purchase consumer products conglomerate Jarden for $15 billion earlier this week, yielding substantial potential payouts for Jarden’s co-founders and CEO if they are not renewed two years following a change-in-control. Contrary to Yahoo’s situation, the Jarden stock price had risen since fiscal year-end, resulting in a much bigger potential payout than was reported earlier this year.

In addition, a peculiarity in Jarden’s filings points to the fact that each executive is already scheduled to receive a certain amount of performance stock awards over the next two years (“Future Awards” in the table above), as laid out in various agreements. The proxy states that “each of the annual restricted stock awards specified in executive’s employment agreement shall be granted, notwithstanding whether the scheduled grant date has been achieved,” but these awards were not accounted for in the 2015 proxy calculation. As a result, in the case of a qualifying change-in-control, vesting of these awards would likely increase the value of severance further.

To examine this scenario, an Equilar study reviewed 79 golden parachute votes in 2015, focused on companies with a market cap over $500 million in their final year before acquisition. Of the 79 companies, more than 91%—or 72 companies—saw their shareholders vote in favor of the golden parachutes proposed. 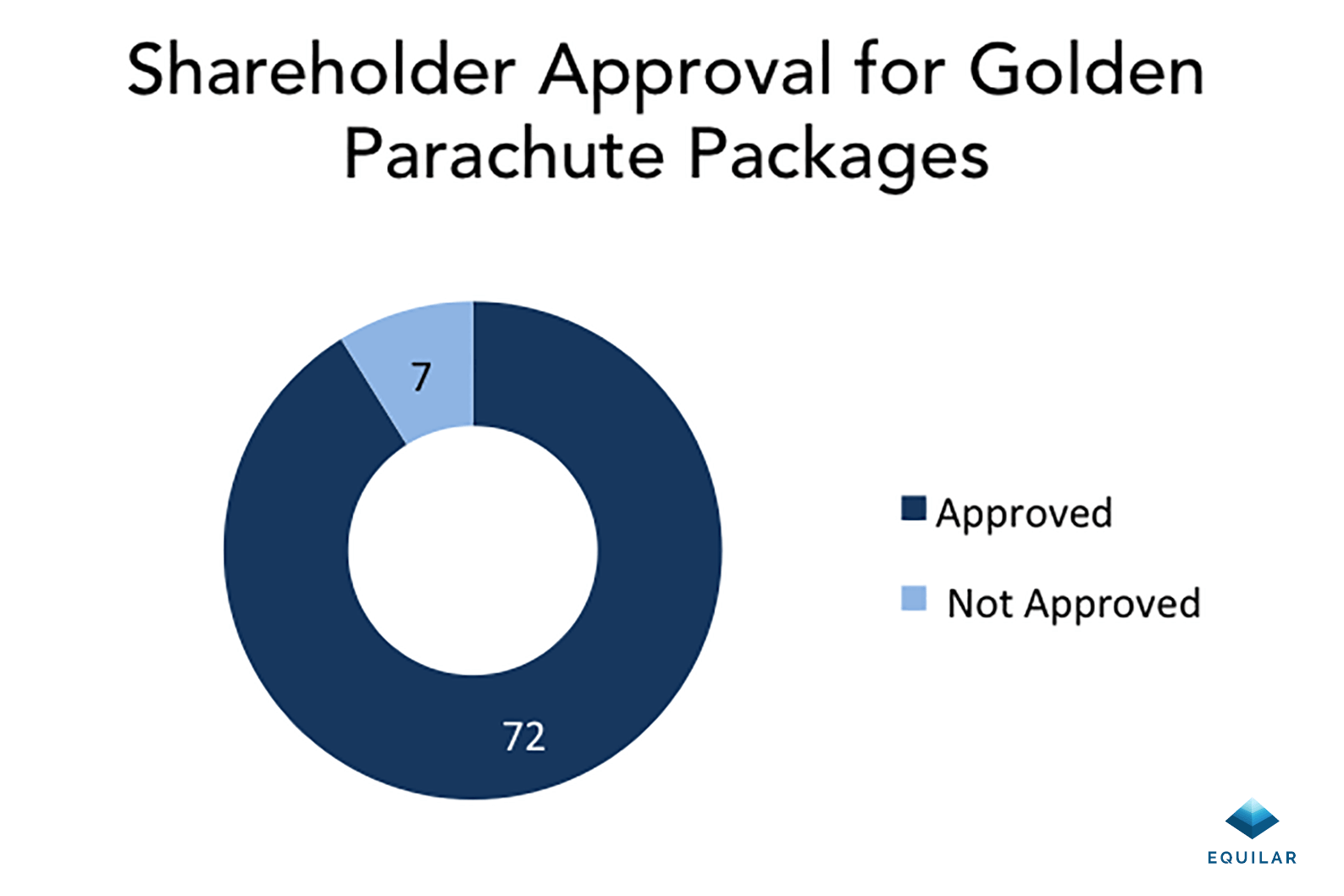 The level of approval, however, shows more variance and nuance. Of the 72 companies where shareholders voted in favor of the golden parachutes, less than half had more than 90% approval, one-third saw 80%-90% approval, and one-quarter of the companies had an approval percentage of less than 80%. Notably, shareholders at 10 of the 18 companies in that bottom quartile voted for approval in the 50% to 60% range.

The data suggests that shareholders are still voting in favor of golden parachutes, and doing so with little indecision at a broad level. But even though golden parachutes are accepted at a vast majority of companies, the degree to which they are approved is not resounding. Comparatively, Say on Pay passed with more than 80% approval at nine in 10 S&P 500 companies, according to a recent Equilar report, displaying the overwhelming support of that initiative in comparison.