On Guard, Part 2: Board Committee Oversight of Cybersecurity 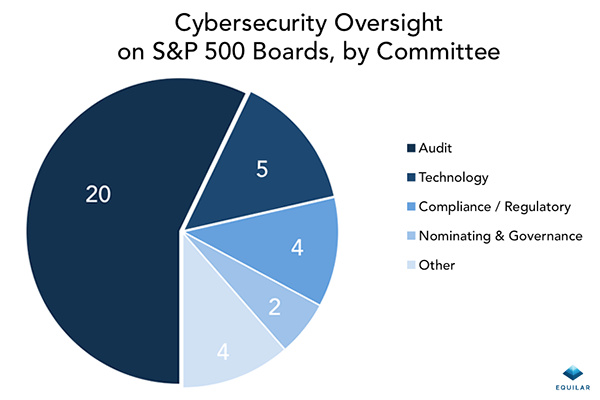 Indeed, investors seem largely unfazed by data breaches. High-profile announcements at companies such as eBay, Target, JPMorgan Chase, The Home Depot and Adobe Systems yielded acute stock drops immediately, but in most cases each was followed by near-term recovery.

Meanwhile, real losses incurred in litigation costs, reputational standing, identify theft, long-term innovation, and ultimately, sales, measure mid- and long-term diminution of value. According to a study by Javelin Strategy & Research, up to one-third of consumers will shop elsewhere if a breach occurs at a retailer, a lesson learned by Target in 2013 when 4th quarter profits fell nearly 50% after 70 million records were stolen.

Interestingly, no S&P 500 board incorporates a cybersecurity committee specifically to address cyber threats. According to Equilar’s analysis—after excluding the five technology committees—cybersecurity oversight in the S&P 500 is assigned to 20 audit committees, four compliance & regulatory committees, two nominating & governance committees and four committees otherwise designated. Given the audit committee’s charter to mitigate risk while optimizing business objectives, this finding may come as little surprise to some.

Of those boards that assign cybersecurity oversight to their audit committees, two represent companies where data breaches occurred in the last two years. After hackers stole 36 million records from Adobe Systems in 2013, the company addressed oversight of cybersecurity by the audit committee in its 2015 proxy (p.11).

In 2014, 56 million records were stolen from The Home Depot in a cyber-attack focused on the acquisition of customer credit and debit card information. Home Depot not only disclosed the audit committee’s oversight of cyber-risk, but also addressed the data breach directly in its 2015 proxy (pp.5-6).

The data in this article is powered by Equilar’s BoardEdge, a new data platform that features detailed information on more than 135,000 U.S. board members. BoardEdge not only includes more than a dozen categories about each board member’s background and leadership experience, but also features a network tool clearly displaying how board members are connected to each other. This last feature—connection—is unavailable in the marketplace, and it provides investors and companies a direct application of the data for board assessment, planning and networking.