Boardroom Diversity: The Impacts of Legislation in the New Decade 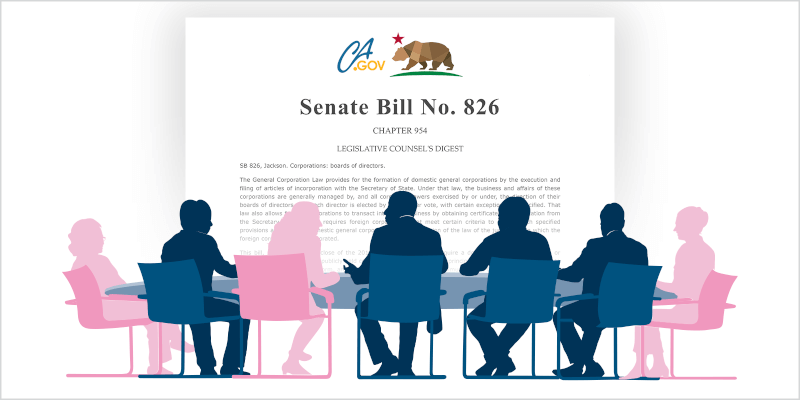 In 2019, female representation on Russell 3000 boards surpassed 20% for the first time ever. Equilar analyzes trends in boardroom diversity through the Gender Diversity Index, a scale where 1.0 represents full gender parity. In the first quarter of 2020, the index rose to 0.44. Much of the increase was due to positive growth in California. From the end of 2018 to the beginning of the second quarter in 2020, the number of women on California-headquartered Russell 3000 boards more than doubled, from 480 women to 964.

The driving factor behind this monumental growth was the deadline created with the passing of the controversial SB-826 bill. This law mandates that all California-based public companies have at least one female director by December 31, 2019. Failure to comply with the regulation results in the company receiving a monetary fine that increases with each further violation. These regulations pressured companies into taking action, and created a sustained upward momentum in the appointment of women throughout the year. As of the end of quarter one 2020 only six Californian companies remain without a female director. This number is down from 104 companies at year-end 2018. From a pure numerical standpoint, the law has worked as intended, and California saw the steepest decline out of all states in all-male boards, going from below average in 2018 to outpacing the country as a whole by a significant margin in 2019.

The chart below illustrates the decline of all-male boards in California against the national percentage since the passing of SB-826 in December 2018. 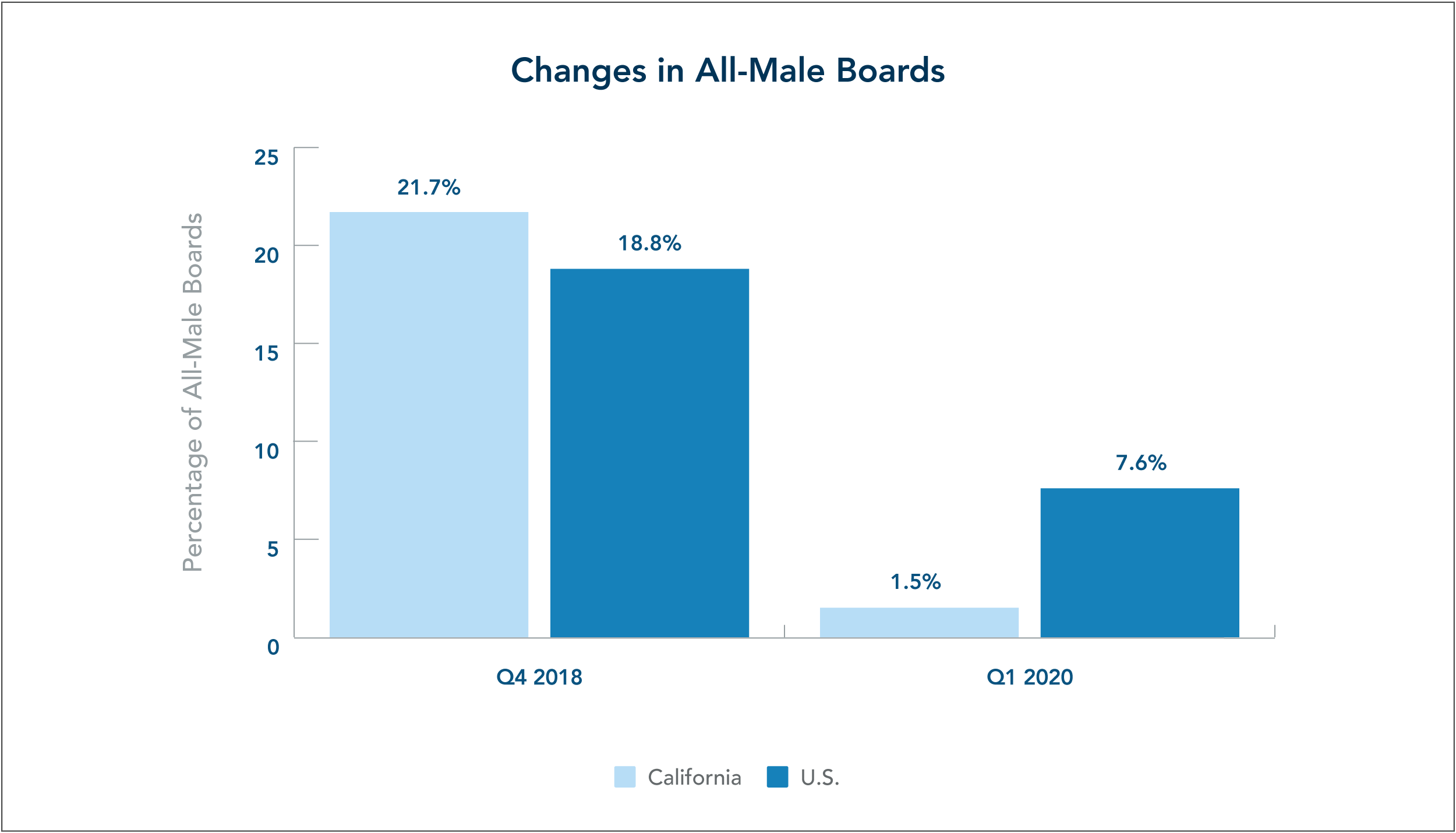 However, there remains the misconception that SB-826 created artificial diversity through the institution of these boardroom quotas. In reality what SB-826 intends, and where states lagging in boardroom diversity might take note, is not to create diversity unfairly, but rather, to accelerate the existing trend of appointing female directors spurred by consulting firms and large institutional investors. For example, around the same time SB-826 was introduced to the California senate, BlackRock, one of the world’s largest institutional investors, updated its proxy voting guidelines to vote against companies that did not have at least two women on their boards. The groundwork for an increase in gender diversity across boardrooms was already in the works; SB-826 created a timeframe to attain it. In the wake of California’s legislation, many other states have begun creating bills to address the issue of lacking boardroom diversity, a trend that will certainly continue into the new decade.

In response to the corporate and legislative developments addressed above, Equilar analyzed state-based boardroom diversity numbers going into the second quarter of 2020. Tracking changes in board diversity at the state level allows readers to understand boardroom trends forming across specific regions of the country and to visualize the effects of mandated diversity legislation as they potentially become commonplace.

The charts below display the states with the highest and lowest percentage of companies lacking a woman on their boards as of the end of Q1 2020, for states with over 11 Russell 3000 companies. 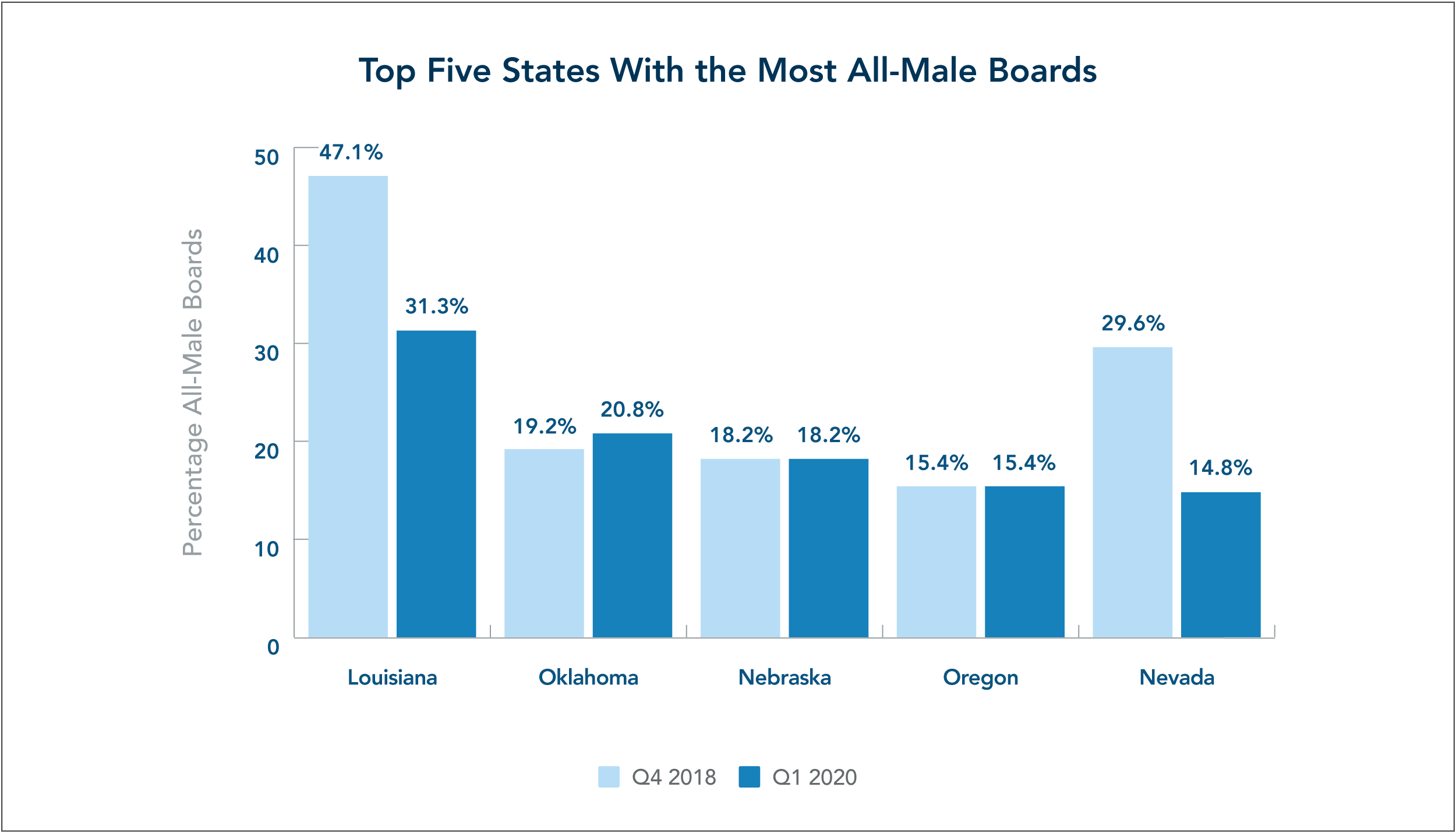 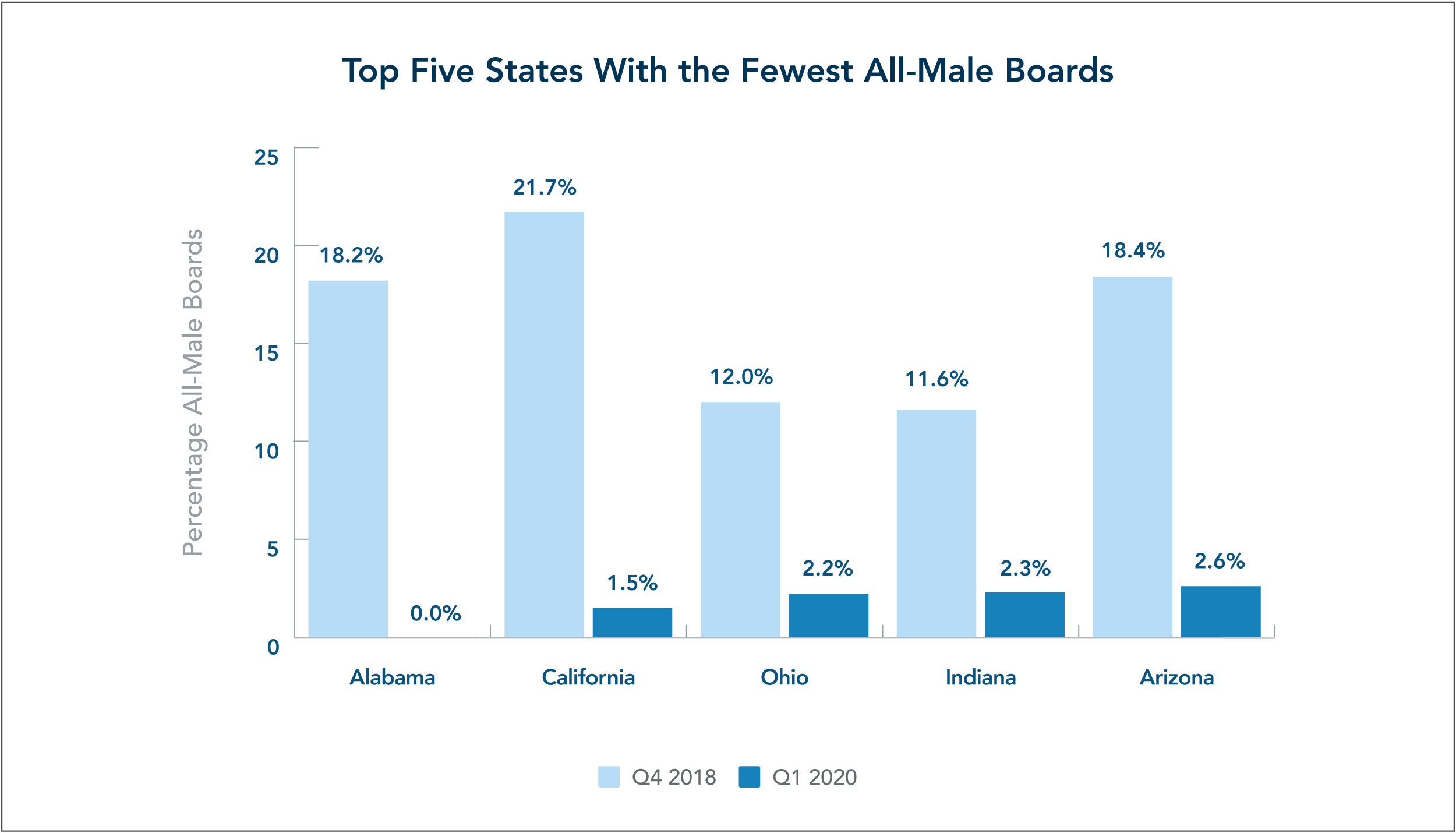 Currently, the state-based data shows less correlation by region than might be anticipated. There may be a certain expectation for states with no binding legislation to lag behind the states proactively enacting laws to mandate diversity deadlines. However, the results seem to vary across the country. For example, Alabama, a state without any laws regarding gender diversity, holds no Russell 3000 companies with all-male boards. California, in contrast, continues to have companies that disregard the deadline and have not appointed a female director.

Trends may begin to emerge further into the new decade as new legislation continues to be voted on and states begin to take definitive stances on the matter. States like California, whose laws ramp up the required number of women over the next couple of years, may see continued growth while states without laws could slow. With the projection of complete gender parity by 2030 in mind the question arises: Will natural market forces be enough to maintain the steady growth seen in the past nine quarters of the Gender Diversity Index or will binding legislation be required to maintain the current trend? 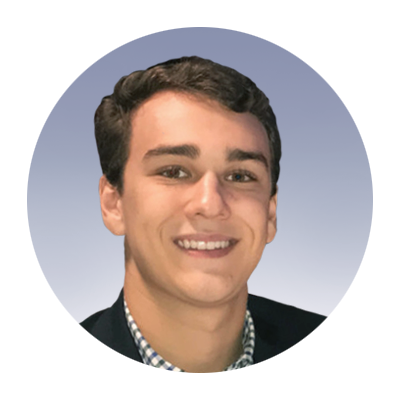