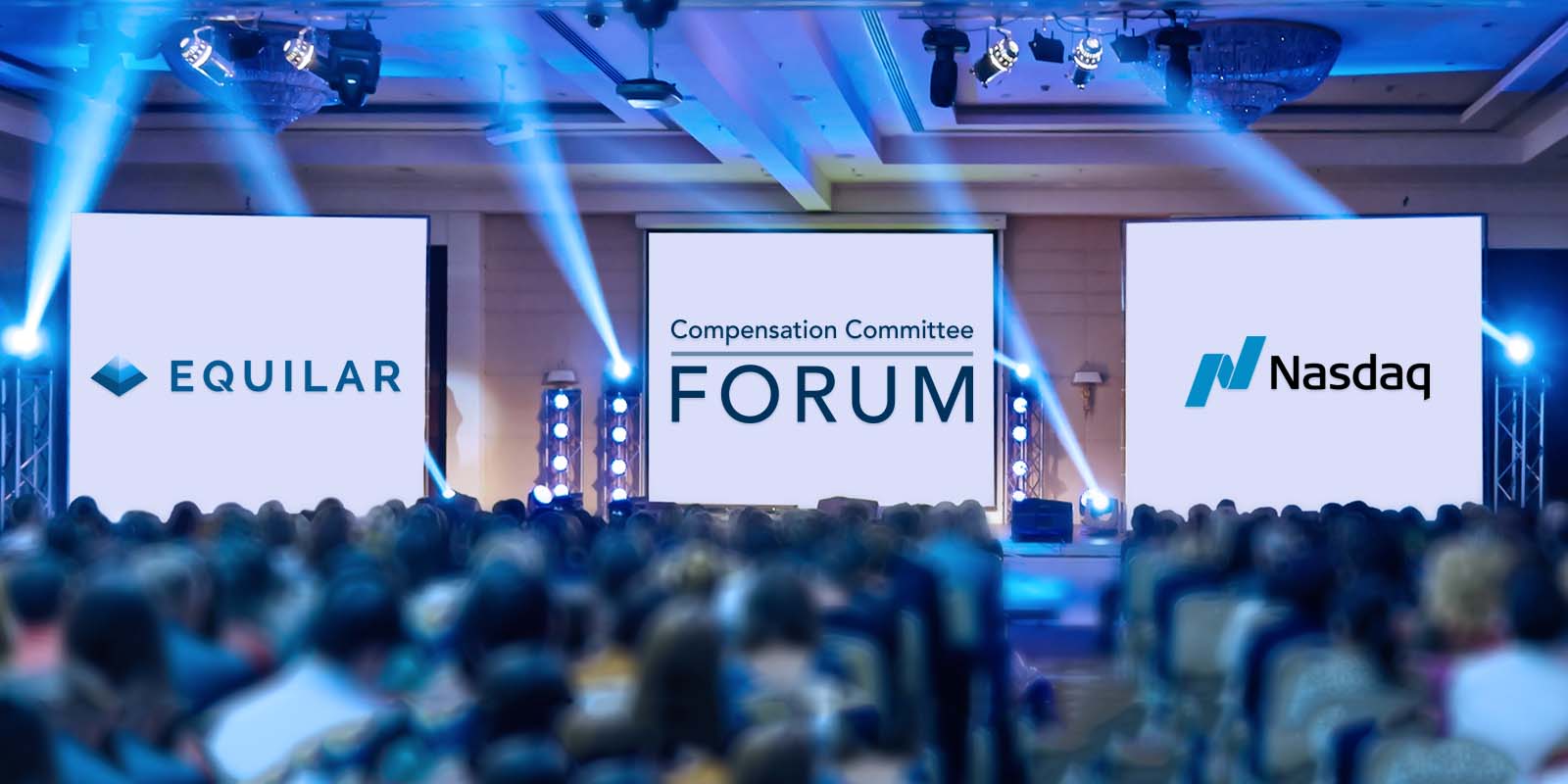 In the years since Say on Pay passed in the wake of Dodd-Frank, executive compensation has been under close scrutiny. This advisory vote on compensation for the highest-paid executives at public companies was seen as a boon to shareholder rights and an opportunity for input on corporate issues where there had been little oversight previously.

In many ways, this has proven to be the case. Shareholder engagement, or direct interaction among companies and their investors outside the annual general meeting (AGM) has become commonplace. Oftentimes these engagement meetings will occur following a poor Say on Pay vote, and many boards of directors and investors alike have commented that these personal interactions will serve to align stakeholder parties on issues completely unrelated to compensation as well.

Yet, in each year since Say on Pay went into effect, CEO pay has increased. In the last five years, median total compensation for CEOs at the highest revenue-producing companies has increased 22%—from $9 million in 2012 to $11 million in 2016, according to a recent Equilar report. Meanwhile, support for Say on Pay has risen, and the fewest companies ever failed their vote in 2017. 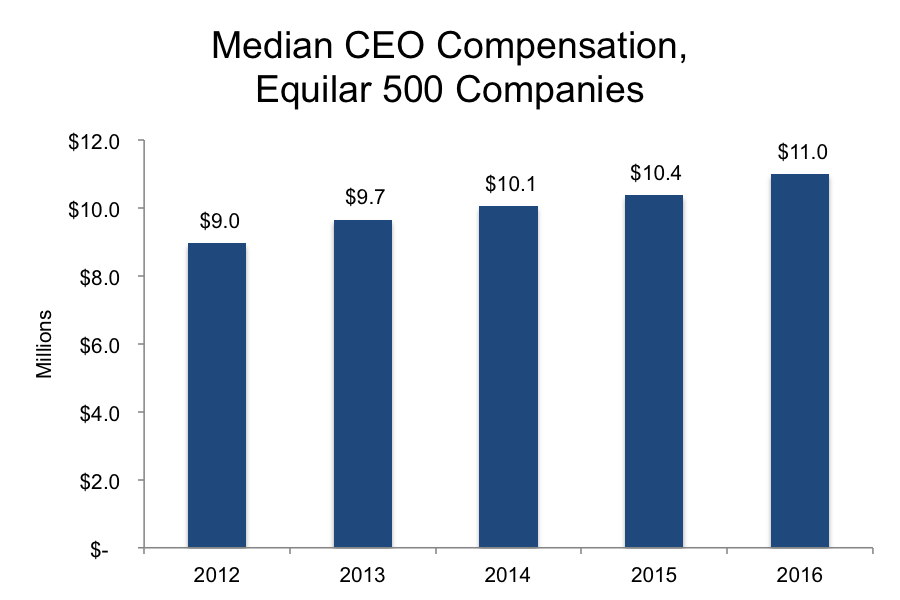 From the outside, these trends may appear counterintuitive, but companies and investors have actually become more closely aligned on this issue in some cases.

At the recent Compensation Committee Forum in San Francisco, co-hosted by Equilar and Nasdaq, board members, HR and compensation executives, and investor representatives had candid discussions about the state of play in executive pay. This question was not addressed explicitly—why shareholder support persists despite increasing CEO pay—but several panels centered on changes to executive compensation shaped by shareholder feedback, which helps explain why these two parties find themselves often aligned.

In 2017, Say on Pay approval ratings were close to if not the highest they’ve ever been. One governance advisor speaking at the Forum cited that there were about 2,500 votes at 2017 meetings and 35 total failures, or a 1.4% failure rate. At the 500 largest companies by revenue, there were just four failures, according to Equilar data. Furthermore, 2017 saw the highest percentage of companies earning more than 90% approval from their shareholders—nearly 8 in 10 companies did so, up from 73.6% five years earlier. 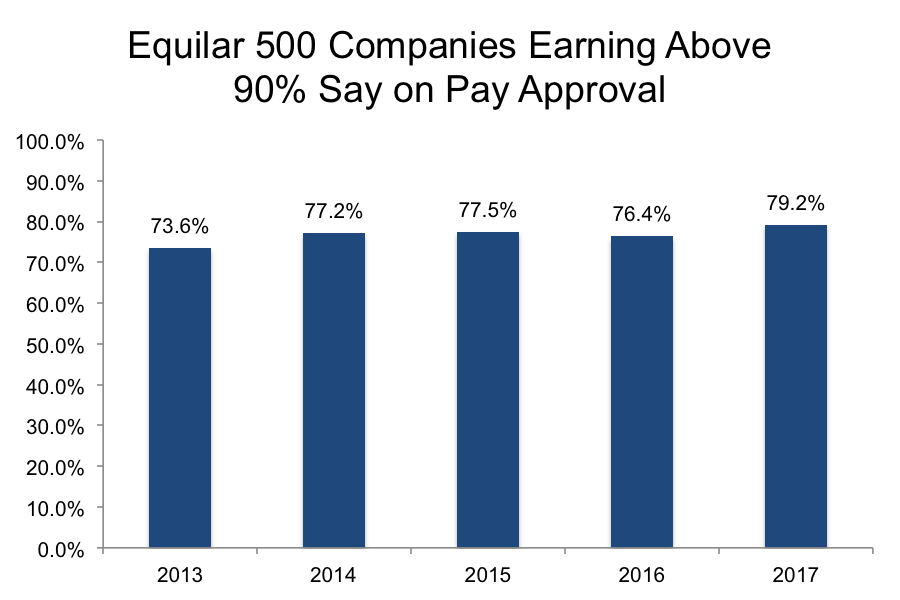 “The stock market is doing really well, and disclosure has become more robust and more tailored,” the advisor said. “Investors are also gaining a lot more insight through engagement, and their growing proxy voting teams are gathering more information to help make decisions on a company-by-company basis.”

Because Say on Pay has forced companies to be more transparent about their pay practices through engagement and in the proxy statement itself, investors have become more sophisticated about the nuances of executive compensation. As a result, this mutual understanding has allowed companies to be more creative with pay plans that make sense for their company, in contrast to following “best practices” only because they’re easy to understand.

“We saw a pivot in 2016—partially because of strong support of Say on Pay over the last five years—and it’s given confidence to the comp committee,” said one compensation consultant. “Investors are learning they have to focus on each company and do a deep dive on how they operate, what creates value and how compensation incentivizes behaviors to reach those outcomes. That’s allowed companies to move away from following the trend—and that’s the trend.”

“Executives are sufficiently aligned with the stockholders already—the median CEO has $22 million of stock in the company, one-third of the long-term incentive plan is paid in stock each year, and almost 30% is a mix of options and time-based vested stock,” one advisor tallied. “Using TSR to measure performance is like calling ‘Touchdown!’ in the huddle. Sure, that’s always the plan, but what else are you going to do to get there?”

Everything is not all sunshine and roses, however. Just because most companies are passing their votes (and a majority doing so with more than 95% approval) doesn’t mean that shareholders are completely satisfied with pay. Companies are taking great strides to help investors understand their pay plans, but of course, some are better than others, and there are still plenty of concerns.

Where are companies going wrong, particularly the ones that do fail?

“There are essentially two scenarios,” said a board member and compensation committee chair whose company failed Say on Pay several years ago. “Either shareholders don’t understand what you are trying to do, which is a problem to begin with, or you have pay design issues.”

In either of those cases, the worst thing a board can do is be dismissive. If a company has a poor vote (generally, anything less than 70% is considered a major concern) the compensation committee shouldn’t write it off as a one-time issue. They have to talk to shareholders and put in the proxy statement what they heard and how they responded regarding the poor support.

“Even if it is a ‘check-the-box’ exercise, go out and do it,” said one consultant. “You need communication in both directions.”

“I don’t want to see change for the sake of change,” added one of the proxy advisors in attendance. “Aligning pay with shareholders is not about making it in the style of all the companies in the world. It’s about linking long-term strategy of your company to the structure of the program.”

Ultimately, the combination of clearer compensation disclosures and direct communications has led to fewer Say on Pay failures. And even when there is an issue, successful shareholder engagement typically has resolved issues. As this relationship has unfolded over the past six years, compensation committees have earned more trust from investors. Even though values continue to rise, a clear philosophy on how pay is awarded and ultimately earned based on performance in line with shareholder value creation has yielded higher support from investors when it comes to executive compensation.

Of course, the question is what happens once the stock market isn’t quite so high and shareholders are not benefiting to the degree they are today. Alignment of compensation and shareholder value is likely to continue, even if it means lower pay for CEOs.

“If the economy is down, even if the executive team has done a good job and outperformed peers, they should only cash in when shareholders do,” said one board member. “If they have to wait an extra few years, that’s the same thing the shareholders have to wait for.”