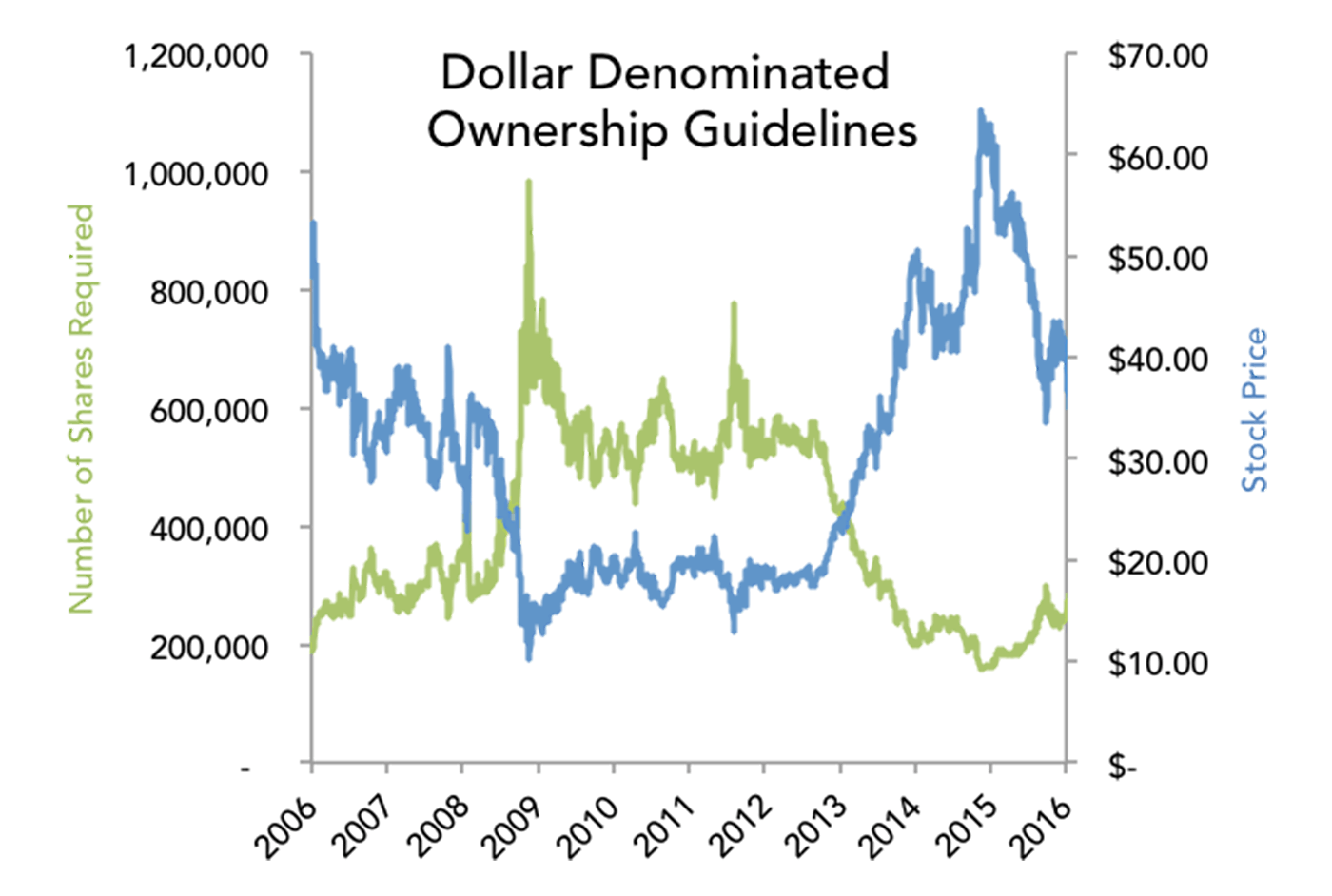 Public companies are beholden to align long-term interests of executive officers with those of their shareholders, thus influencing how companies pay for performance. The use of equity packages may address the issue, but because executives can still sell or hedge these shares, their incentives to make long-term decisions for the company are not always clear. In response, many companies implement stock ownership guidelines, requiring executives to own a certain amount of equity in the company. Nearly 90% of Fortune 100 companies have some form of ownership guidelines, according to a recent Equilar report.

Dollar-denomination is the most common approach for ownership guidelines, encompassing the standard multiple of salary, other sorts of pay multiples and fixed dollar targets. Because it is common practice, there is an existing level of familiarity. Another key benefit is that it auto-adjusts to evolving roles, particularly outside the C-suite. “The [positions] with the more critical roles to the company’s future of growth are the ones that are going to be paid more and therefore are going to be held to a higher standard when it to comes to a multiple of salary ownership guideline,” explained Outlaw.

The drawback of the approach is that it creates a moving target, and executives can dip below thresholds shortly after meeting them (see example in graph below, courtesy of Equity Methods). On the one hand, there is an opportunity for an executive to join, but a sudden increase in stock price might water down the target number of shares the executive has to own to hit the guideline threshold. On the other hand, there is the possibility for the executive to meet the threshold for years but fall out of compliance facing a subsequent dip in the stock price.

Some companies may choose to denominate their ownership guidelines by a number of shares. The benefit is expressing a fixed number up front that will be based on a multiple of salary or some other dollar value target. This allows executives and compensation teams to calculate exactly what they have to do to achieve their thresholds. The drawback of such an approach is that it is not common and companies may need to set the bar higher (see example in the graph below, courtesy of Equity Methods). Proxy advisors tend to look at plans from a multiple of salary level, so there may be a need to build in some cushion if stock prices move the target guideline. Targets must also be reassessed more periodically to make sure they align according to the stock market and investor guidelines. 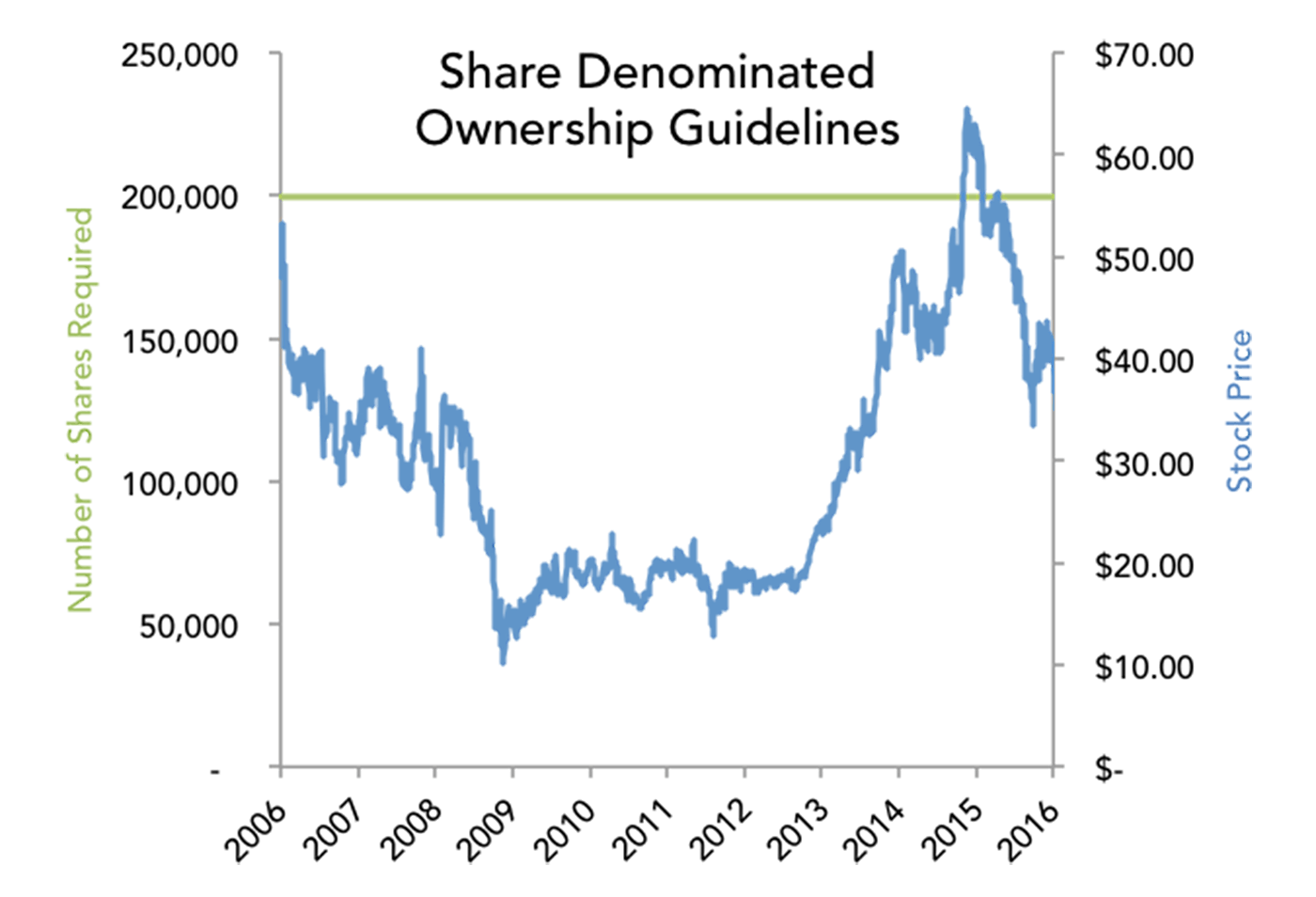 The “lesser of” approach means that an executive has to meet the lesser of a fixed dollar amount or a fixed share amount. The approach follows the benefits of a dollar-denomination; however, there is a ceiling of the number of shares executives must reach. This approach stops share price volatility from causing a target to be missed once it is met and allows for flexibility with sharp share price increases. “This is a dollar denomination that looks like a typical approach companies use, but it can also recognize that with a volatile stock price comes an absolute of shares, be it a percentage of a company or just a number of shares, that represents a significant skin in the game,” explained O’Toole.

The “trailing average” approach does not entirely stray from the flexibility of a dollar-denominated guideline, but has two key benefits lacking from dollar-denominations. The first is that it smooths out extremes, which is helpful for volatile companies and market conditions. The second, being a trailing average, allow companies to foresee any possible changes coming. For example, if there is rapid stock price movement, companies will know that corresponds to changes to occur in their ownership guidelines over the next year or so. This provides executives the opportunity to plan in advance in terms of what their share retentions and disposals are going to be.