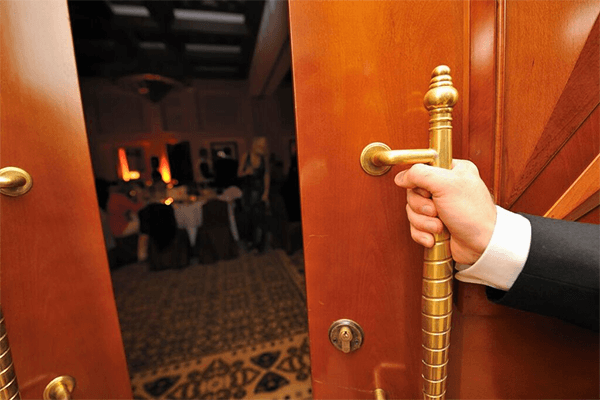 As detailed in Equilar’s latest report, shareholder engagement is on the rise in various forms, and company outreach to ensure investors have appropriate access to exercise their rights is a dominant topic in corporate governance.

Immediately following the passing of Dodd-Frank and the subsequently mandated Say on Pay vote, regulator and shareholder scrutiny has focused heavily on executive compensation. More recently, however, discerning parties are looking to the boardroom. In addition to issues such as director pay and board diversity, shareholders are also looking to have a voice in nominating board members, also known as proxy access.

Equilar’s annual governance report found that a majority of proxy access proposals occurred among the largest US companies, particularly the S&P 500. However, this growing trend is evident when looking at the broader set of Russell 3000 companies as well. The number of proxy access proposals grew steadily from 2012 to 2014 but then skyrocketed in 2015, totaling 97—compared to just 43 total in the prior three years combined. The spike can partially be attributed to New York City Comptroller Scott M. Stringer’s push to implement proxy access at 75 companies held by New York City public pensions, and indeed, 60 of those companies are included in Equilar’s dataset of Russell 3000 companies in 2015 alone. 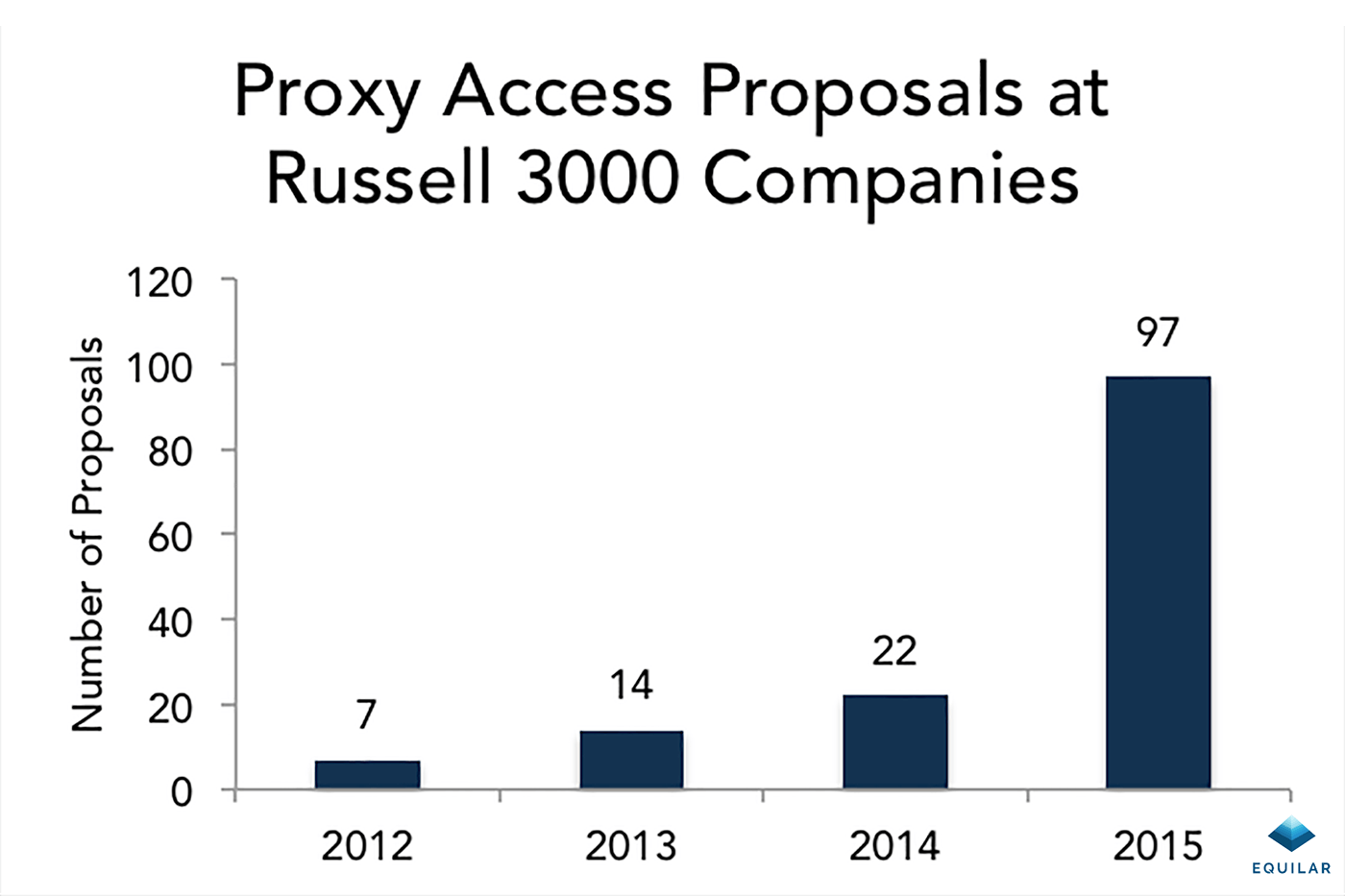 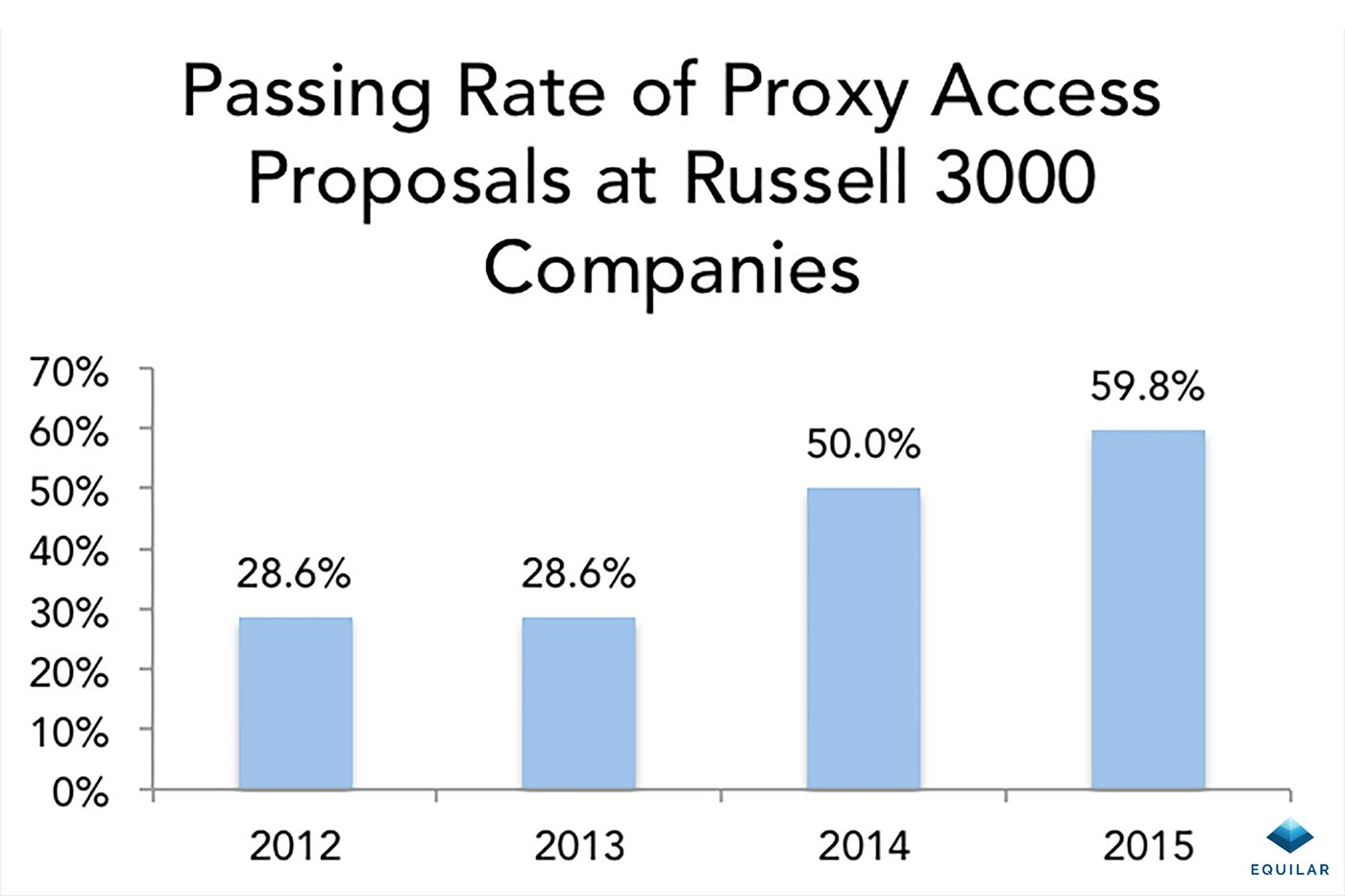 Just before year-end, Apple amended its bylaws to allow proxy access, becoming the latest in a string of high-profile companies to do so. At the time, Apple became the 129th U.S. public company to adopt proxy access, according to the Financial Times. Furthermore, Agenda noted that Staples, McDonald’s, Goldman Sachs and JPMorgan Chase also had adopted proxy access in the weeks preceding the Apple announcement.

In addition to the glut of proxy access proposals passing, ISS’ updated FAQs highlighting proxy access in late 2015 reiterates that this topic is not going away, and that we should expect a continued uptick throughout 2016. Stay tuned for the latest updates.

For more details on the latest trends in shareholder engagement, join us for Equilar’s webinar featuring Hogan Lovells. Register to tune in on January 14 or listen on demand .