REDWOOD CITY, CA (October 18, 2017) — Annual compensation for boards of directors at the largest U.S. public companies has risen nearly 20% over the past five years, according to a new report from Equilar, Director Pay Trends, which features independent commentary from Meridian Compensation Partners.

“Median annual retainer for board members at large-cap companies amounts to approximately 2% the value of the top CEOs at these companies,” said Amit Batish, Director of Content at Equilar and Editor-in-Chief of the report. “However, because directors have been paid increasingly in stock value in the past few years, investors and other corporate stakeholders have been keeping a close eye on board compensation as a check and balance on these key decision makers.”

Director pay overall has increased consistently on a year-over-year basis, with modest increases anywhere from 2% to 5% annually. It’s important to note that because director pay is now more commonly being awarded in equity grants, values are increasing, but that’s not necessarily money board members are putting directly in their pockets at the end of the year. 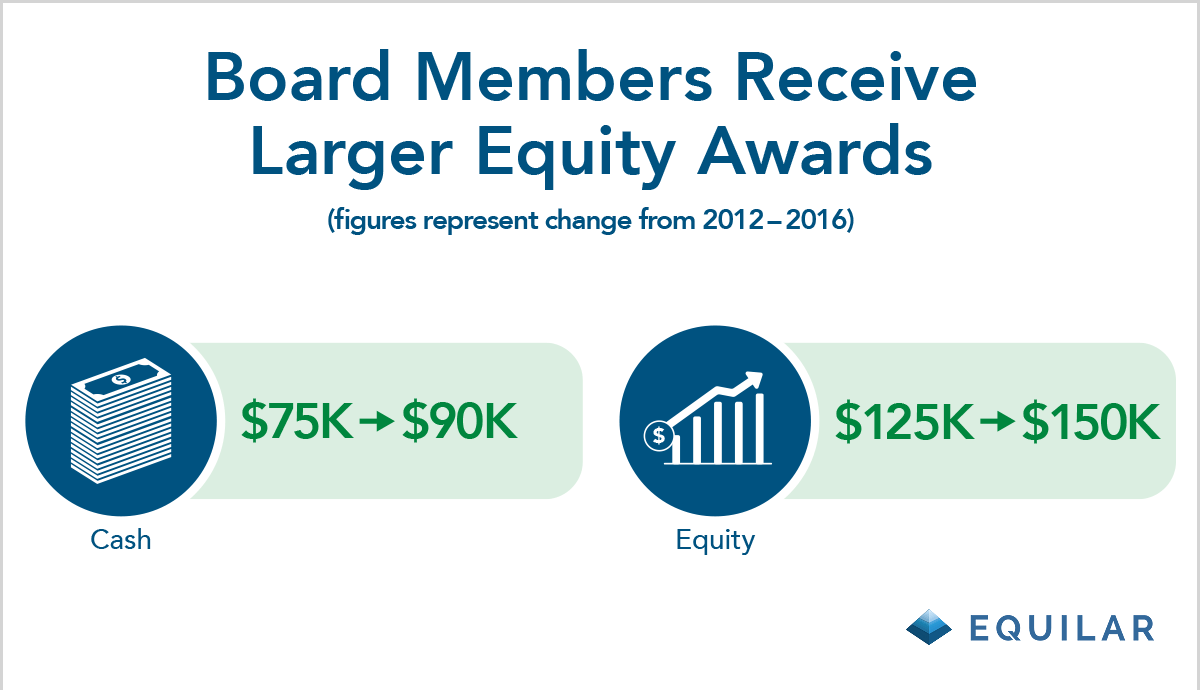 “With respect to program design, director compensation should be aligned with directors’ role as fiduciaries,” said Ron Rosenthal, Lead Consultant at Meridian Compensation Partners. “Thus, directors of U.S. public companies typically receive a combination of cash and equity compensation that is ‘fixed’—i.e., the amount of compensation granted does not vary based on performance.”

Though executive compensation has been a more popular topic of interest and scrutiny over the last few years, some elements of director pay, such as meeting fees, have declined and are falling out of favor. In the 2016 fiscal year, just 14.5% of companies awarded meeting fees to directors, down 15 percentage points from 29.5% in 2012. The largest decrease in companies granting meeting fees occurred between 2013 and 2014, and then again between 2014 and 2015, with both years dropping 4.2 percentage points from the previous year.

According to Rosenthal, these trends reflect a number of considerations, including the view that meeting attendance is a basic duty requiring no additional compensation. However, some boards want to recognize the additional responsibilities and time commitment associated with committee service and thus the prevalence of committee member retainers has increased in recent years. These retainers, while modest in value, serve to recognize the additional duties for, and additional contributions by, directors that serve on board committees.

“The elimination of meeting fees also enhances the transparency of the director compensation program, as shareholders can more easily understand the annual compensation that will be paid to directors,” Rosenthal said.

Please click here to request a copy of the full report.

Meridian Compensation Partners, LLC provides executive compensation consulting and corporate governance services to over 500 public and private corporations. With 11 offices and more than 60 associates in the U.S. and Canada, our services include board level advisory services, compensation program design, and market intelligence on executive pay and governance matters. www.meridiancp.com